With Hurricane Harvey now upgraded to a Category 3 hurricane and set to make landfall late today (August 25) or early tomorrow, researchers in its path have prepared their facilities and are waiting to see if their experiments, equipment, and samples can survive the storm.

Ensuring animals are cared for is a top concern, Elda Sánchez of Texas A&M-Kingsville tells The Scientist. Sánchez co-directs the National Natural Toxins Research Center, where researchers planned for flooding and power outages that could endanger samples stored in freezers and refrigerators, she says. Instruments have been moved from floors to tabletops, animals have been relocated to higher shelves, and refrigerators and freezers have been hooked up to a backup generator.

The center houses more than 450 venomous snakes, plus the mice to feed them, she says. Before research center staff...

Further south and more directly in the path of the hurricane, Robert Dickey, director of the Marine Science Institute (MSI) at the University of Texas, is also making plans to get back to experimental animals—in this case, hundreds of fish kept in tanks—as soon as possible. The MSI is on an island in the Gulf of Mexico and was evacuated, he says, but he’s staying nearby in Corpus Christi. The fish can survive for a week or more without food, but if their conditions change because the power goes out and filtration systems stop working, it may affect experiments, he says. “The individual faculty scientist would have to evaluate that and determine whether they need to scrap that and start again or whether the results were unaffected,” he says. 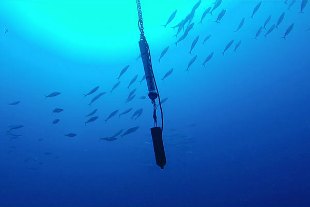 A hydrophone used to track electronically tagged fish in the Gulf of Mexico. Equipment like it could not be retrieved ahead of Hurricane Harvey. TEXAS A&M UNIVERSITY-CORPUS CHRISTIOverall, “the biggest worries are, of course, coastal inundation, with a surge and flooding,” Dickey tells The Scientist, as well as the possibility of support systems going down. The Corpus Christi area hasn’t seen a storm of this magnitude in decades, but Dickey previously worked for a Food and Drug Administration facility on Dauphin Island, Alabama, that weathered “six or seven” hurricanes during his tenure, and he says he drew on that experience when planning for emergencies at MSI. “It’s very important to cover all your bases and . . . take care of the safety of your people and make sure that they understand what their roles are, and that they are observant of the evacuation orders,” he says.

At the Center for Sportfish Research and Conservation at Texas A&M University-Corpus Christi, the safety of students and personnel is also a top priority, says the facility’s director, Greg Stunz. The center has noted the experiences of other marine research institutions in past storms. “We’ve learned from them, and so we’re really prepared,” he says.

The center has been “locked down” since Wednesday afternoon, giving people—including himself—time to prepare and evacuate, he says. The center doesn’t have any captive research animals, and Stunz doesn’t anticipate that the wild sharks and other fish they track and study in the Gulf of Mexico will be in danger. But his team didn’t have time to retrieve underwater listening equipment worth at least $70,000 from the Gulf. “We just have to hope for the best that that gear will make it through the storm,” he says.

At least one researcher in South Texas is thinking of studying the ecological effects of Hurricane Harvey, even as he helps his institution brace for impact. Hudson DeYoe, an aquatic ecologist who studies seagrass dynamics at the University of Texas Rio Grande Valley, says that he may get out into the waters surrounding the facility after Harvey passes through. “I’ve done Hurricane Dolly [2008] and Hurricane Alex [2016]. We would get in the boat and go back out in the bay side and start looking at salinity and water quality changes, particularly salinity,” he tells The Scientist. “Hurricane Alex had a massive impact upon our area. It dramatically changed the seagrass distribution in the [South Bay], and it’s still in the recovery mode from that.”

Correction (August 25): The original version of this story misidentified Elda Sánchez's home institution. The mistake has been corrected, and The Scientist regrets the error.