ABOVE: The animal care team at the Tulane National Primate Research Center (shown in background) provided continuous care for its colony of nonhuman primates in the days surrounding Hurricane Ida.
TULANE UNIVERSITY

Nearly two weeks after Category 4 Hurricane Ida barreled through coastal Louisiana at the end of August, research institutes in the area are taking inventory. Most labs appear to have survived relatively unscathed, though many researchers have not yet been able to see their laboratories for themselves.

“We took it very seriously,” says Jay Rappaport, director of the Tulane National Primate Research Center. University staff had daily meetings to discuss preparation leading up to the storm and ensured that no researchers had ongoing projects vulnerable to disruption when the storm hit. 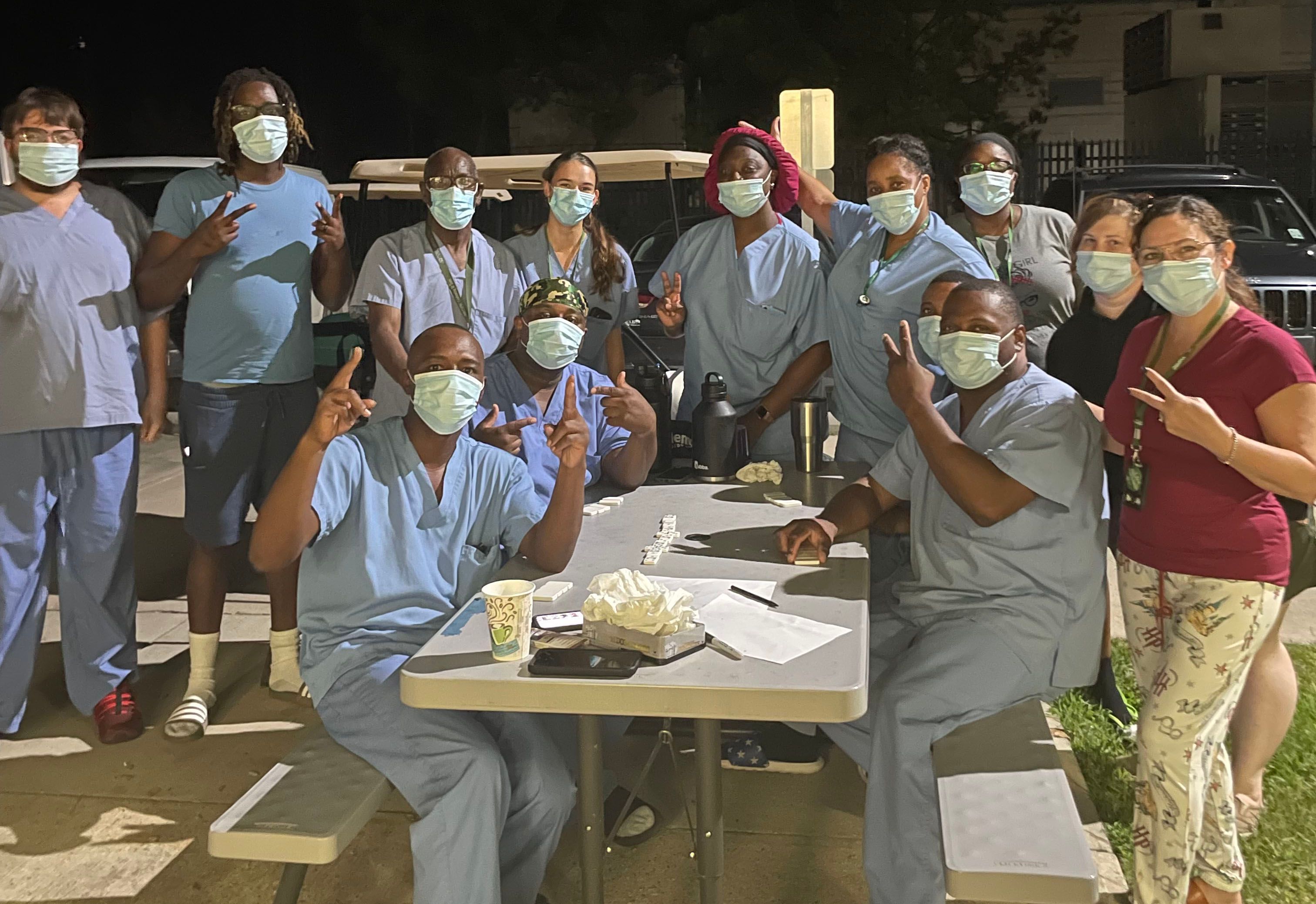 Members of the animal care team at the Tulane National Primate Research Center gathered at night to play games and socialize in the days following Hurricane Ida.
Tulane University

Most scientists evacuated, but some had to stay. Nearly 40 members of Tulane’s veterinary staff have been living and sleeping at the primate center to keep the animals safe.

“It was a good thing” that they stayed, says Rapaport, because the morning after Ida hit, “you couldn’t even get to the primate facility. There were so many downed trees.”

More than a million people in Louisiana lost power during the storm, and hundreds of thousands are still waiting to get it back. “It was primarily an electrical event,” says Rappaport. University buildings sustained little damage from fallen trees or flooding. The biggest loss, he says, was likely in the regional biocontainment laboratory, a biosafety level 3 (BSL3) lab where the generator failed and many reagents and samples stored in freezers will need to be replaced. Luckily, the scientists had paused all experiments prior to the hurricane hitting, “so there was no release [of dangerous pathogens].” In the future, says Rappaport, the university is considering conducting BSL3 studies only outside of hurricane season for an extra measure of safety.

Other institutes faced similar issues. Though Stephanie Archer, an ecologist from the Louisiana University Marine Consortium (LUMCON), says she hasn’t returned to the lab yet, photos shared on the institute’s Facebook page on September 1 show a building with broken windows and equipment strewn about. “There’s still no power or water or bathrooms or anything like that down there,” says Archer. A Facebook post written by Craig McClain, executive director at LUMCON, says that that many offices and dormitories sustained significant damage from wind and water, but the laboratories, auditorium, and library were left mostly intact. Before she left campus in August, Archer boxed up her computer and hard drives, full of data from her recently-processed field samples, to take with her, then covered the rest of her equipment in plastic wrap.

I have weathered many storms during my tenure as Executive Director, Hurricane Ida was something entirely different. Yesterday was my first chance to assess the damage since losing contact with the marine center’s gauges and cameras. . .Read more https://t.co/Ob1CIc7Zgk pic.twitter.com/GqpL3Psfko

Jacqueline Guendouzi, a linguist and the head of Southeastern Louisiana University’s Communication Sciences and Disorders Department, says that the main campus still doesn’t have power, and while a generator seems to have prevented damage in the biology building, the one powering the chemistry and physics building didn’t withstand the storm. She suspects that’ll mean some samples have been lost, but she hasn’t checked yet. “Right now, faculty are trying to deal with damage to their homes, and the administration are trying to put together an academic recovery plan,” she says.

As Southeastern works to recover from Hurricane Ida, you can help and donate to support the needs of Southeastern and it’s students. Go to https://t.co/iHTCdrJSTR and choose Area of Greatest Need to support recovery. pic.twitter.com/iLnEaslDjo

At the institutes that do have power, the cleanup is starting, though many employees will need to deal with the destruction of their homes first. On September 7, Gregory Bix, the director of the Clinical Neuroscience Research Center at Tulane University’s medical school, told The Scientist that “surrounding towns still have large swaths of residential neighborhoods that remain without power, my home included, so that many who work in the labs or building facility support personnel are as of yet unable to return to the city to actually go to work. Some of my colleagues and members of my laboratory sustained property damage from Ida ranging from minor all of the way to catastrophic, and this will most definitely impact their ability to safely return to their research projects.” The next day, he followed up to say he was on his way home from Florida—where he’d evacuated to—as he was told the power had returned to his house in New Orleans.

Members of the advisory board at LUMCON set up a fundraiser to help staff whose homes were damaged or destroyed. Archer says, “Some have lost their homes and are trying to figure out where to be at the moment, and we’re trying to help them as much as possible right now.”