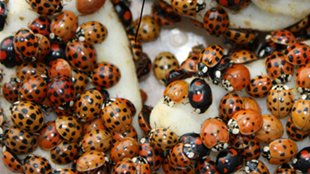 Harlequin ladybirdsANDREAS VILCINSKASAsian harlequin ladybirds, introduced to Europe and other parts of the globe as an environmentally-friendly means of pest control, are causing their own ecological problems—they’re wiping out native ladybird species. And one reason for the harlequin’s global dominance could be its use of a biological weapon, according to a report published online today (May 16) in Science. The study reveals that harlequins carry a fungal parasite to which they are immune, but which kills other ladybird species.

“[We] should have seen this coming, because we knew all about it from human history,” said Stuart Reynolds, emeritus professor of biology and biochemistry from the University of Bath in the U.K., who was not involved in the work. “When the Spanish conquistadores invaded Central and South America, there were tiny numbers of them and yet they managed to invade extremely successfully because they carried smallpox and...

Harlequin ladybirds (Harmonia axyridis) are good eaters, with each beetle consuming roughly 200 aphids per day. It is for this reason, that they were considered a great way to fight aphid infestations on agricultural crops, explained Andreas Vilcinskas, a professor of phytopathology and applied zoology at the Justus-Liebig Universität in Giessen, Germany.

But since their arrival in Europe 50 or 60 years ago, these pest-controllers have become pests themselves. “In the past 2 decades they have become invasive,” Vilcinskas said. “In the autumn, when the temperature drops below 0 °C, they aggregate near houses, and sometimes you have 10 thousand beetles which aggregate and enter a house.” Furthermore, native ladybird species are now almost impossible to find in some areas, he said.

H. axyridis are successful invaders for “many different reasons,” said François Verheggen, an entomologist at the Université de Liège in Belgium, who was not involved in the study. Not only do they tend to eat more than other species, and so might limit available food for their competitors, they are also better at surviving cold temperatures and they produce larger amounts of toxic alkaloids—a defense mechanism against predators, he said.

Another possible reason is that the eggs and larvae of H. axyridis are toxic to other ladybird species, which consume one another’s offspring. “The worst enemy for ladybirds is other ladybirds,” said Vilcinskas.

The reason that H. axyridis can eat other species’ young without penalty, while their own young are fatal to competitors, was thought to be because H. axyridis contains a particularly abundant alkaloid called harmonine in its hemolymph, or body fluids.

To test that theory, Vilcinskas injected purified harmonine into Coccinella septumpunctata, commonly known as the seven-spot ladybird. They found that even at high concentrations the compound did not kill the ladybirds, but that unpurified hemolymph did.

Vilcinskas thus turned back to H. axyridis hemolymph to find the culprit. “I never saw anything like it,” he said. “[The beetles] were full of parasites.” The parasites he found in the H. axyridis hemolymph were single-celled fungi, or microsporidia, of the Nosema genus. Vilcinskas purified the fungi and injected them into C. septumpunctata, killing them all within 2 weeks.

“Presumably, the ability of the Harlequins to tolerate this nasty intracellular microsporidian is something that has evolved over a very long period of coexistence,” said Reynolds. Indeed past studies have revealed that H. axyridis has evolved an impressive immune system, said Vilcinskas. “They have more than 50 antimicrobial peptides,” he said, “No other insect has more.”

Additionally harmonine itself has been found to have antimicrobial qualities, including activity against Mycobacterium tuberculosis, which causes human tuberculosis, and Plasmodium falciparum, which causes malaria. H. axyridis’s unique and powerful immune system could even be “a promising source for new drugs,” said Vilcinskas.

So although the introduction of H. axyridis to Europe has been bad news ecologically speaking—indeed it may be too late to save some native species, feared Vilcinskas—the results of the research into this ecological problem may end up yielding some unexpected medical benefits.