The second-largest penguin population in the world has lost 88 percent of its members, researchers reported last week (July 25) in Antarctic Science. The penguins live on Ile aux Cochons (Pig Island), which lies in the southern Indian Ocean between Africa and Antartica.

The decline “is completely unexpected, and particularly significant since this colony represented nearly one third of the king penguins in the world,” coauthor Henri Weimerskirch, an ecologist at the Centre for Biological Studies in France, tells Agence France-Presse.

Weimerskirch and his colleagues used aerial and satellite imagery to analyze changes in the colony size over the last five decades. Since the 1980s, the world’s largest king penguin population has shrunk from 500,000 breeding pairs to only 60,000 breeding pairs.

According to CNN, the decline appears to have begun in the late 1990s, around the same time as an El Niño event, which drove fish and other creatures south, away from the king penguins. The penguins depend on the fish and other critters for sustenance. An earlier study by the same group found the archipelago to which Pig Island belongs may be uninhabitable for king penguins by the end of the century, threatening the existence of over 70 percent of the species. 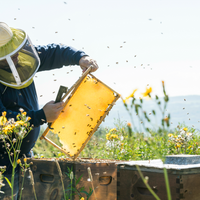