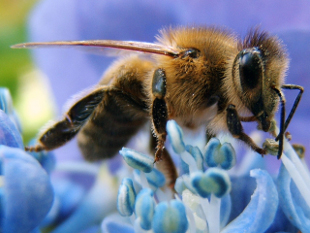 The Ig Nobel prizes, which honor projects “that make people laugh, and then think,” this year went to researchers studying the physics of urination, the diagnostic capability of speedbumps, and the pain of bee stings on various parts of the body, among other topics. Ten awards were given to 12 research teams during a sold-out ceremony at Harvard University last week (September 17). The awardees also presented a series of public lectures, in which they explained their research in five minutes or less, at MIT on September 19.

Among the 2015 awardees are two groups jointly receiving an Ig Nobel for experiments on the biomedical consequences of kissing. Hajime Kimata of Satou Hospital, Japan, demonstrated that kissing can reduce allergic skin reactions in some patients, and a team led by Gabriel Minárik of Comenius University, Slovakia, found that partner DNA persists in saliva samples after kissing.

A team led by Rodrigo Vásquez of the University of Chile received an award for its work on the kinematics of extinct theropods. When they attached a weighted stick to a chicken’s tail using a clay-like adherent, the researchers observed that the chicken walked less like a bird and—potentially—more like a dinosaur. Another team, led by Anthony Harnden from the University of Oxford, won an Ig Nobel for determining that if patients do not experience severe pain while driving over speedbumps, they are unlikely to have acute appendicitis.

The Ig Nobel in physiology and entomology was shared by Justin Schmidt of the Southwest Biological Institute—for creating the Schmidt Sting Pain Index to rate the relative pain of various insect stings—and Michael Smith from Cornell University—for allowing honeybees to sting him repeatedly on 25 different areas of his body. Smith determined that the nostril, upper lip, and penis shaft were the most painful places to be stung.

A team from Georgia Tech, led by David Hu, won an Ig Nobel for its discovery that nearly all mammals empty their bladders in 21 seconds (plus or minus 13 seconds). The phenomenon is due to the consistent proportions of the urinary system in mammals as they increase in size—while an elephant holds more urine in its bladder than a goat does, the elephant also empties it at a higher speed.

“I’m proud to be a representative of people who appreciate scientific humor,” Hu said at the MIT lectures. “I’m super happy to do it. I think we should have more of it.”