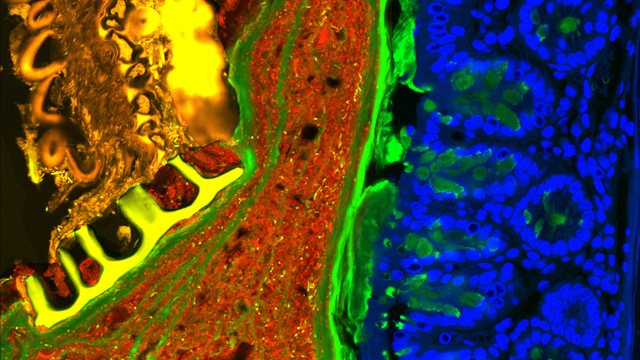 A section of the mouse gut imaged with confocal microscopy. Mouse epithelial nuclei are labeled in blue, the mucus layer in green, and bacteria in yellow and red. The large, yellow and golden structures are food fibers. The mucus is thick and continuous as this mouse was not experiencing diarrhea.CAROLINA TROPINI, SONNENBURG LAB, STANFORD UNIVERSITYAn over-the-counter laxative causes more than just the familiar effects of diarrhea. According to a study published today (June 14) in Cell, the make-up of the microbiota and immune system activation changed after mice received a laxative that induced diarrhea for less than a week.

The study suggests that “the idea that the microbiome is acquired early in life and then is just very stable is a bit of an oversimplification,” says Andrew Gewirtz, an immunologist at Georgia State University who did not participate in the work. “In reality, a...

When she was a PhD student, Carolina Tropini, a biophysicist and current postdoc in Justin Sonnenburg’s lab at Stanford University, noticed that some bacteria responded to osmotic shock—that is, rapid changes in the concentration of water and the molecules dissolved in it—by shrinking, but were able to start growing again once their environment was back to normal.

The microbes in the human gut experience different concentrations of dissolved substances frequently, and constipation relievers such as Miralax work by bringing more water into the gut, thus inflicting an osmotic shock on the resident microbes. Tropini says she started to wonder how the microbiota copes with the more extreme fluctuations, and how this affects the host.

Tropini and colleagues added Miralax to the water of both germ-free mice that had been colonized with human gut microbes and mice with normal mouse microbes for six days, which gave the animals diarrhea. The researchers found that the composition of the animals’ microbial communities before, during, and after treatment varied widely. For instance, one highly abundant microbial family, S24-7, which is nearly exclusive to the guts of warm-blooded animals, appeared to go extinct after just three days of the laxative in both sets of animals and did not recover after the treatment period. S24-7 family members ferment carbohydrates and make up nearly half of the mouse gut microbiome.

In follow up experiments, the authors showed that S24-7 stopped growing in vitro at high concentrations of salt, sugar alcohol, and polyethylene glycol, the main component of Miralax. They also determined that they could reintroduce S24-7 to treated mice by housing the treated animals in the same cages continuously or with feces from mice with intact microbiomes, suggesting that it is possible to reverse the diarrhea-induced changes in the microbiota with exposure to gut microbes.

“Generally, everyone thinks of diarrhea—in particular of taking laxatives—as something that is very limited to the time that you’re taking it” or experiencing symptoms, says Tropini. “The main take away really is that we need to be thinking more carefully about some of these over-the-counter drugs because they may have other important effects on our gut ecosystem.”

The team then looked into the effects of the laxative on the mice as a whole. They found that the layer of mucus that protects the gut lining from its contents thinned while the animals had diarrhea, but recovered fully by two weeks after laxative removal. The cells lining the intestine also changed shape during treatment, but were back to normal a few days later. Previous work showed that changes to the mucus layer could affect the immune system of the host, and the authors found that mice with a limited, three-member microbiota that drank Miralax water did develop antibodies to the gut microbes, whereas untreated mice did not. This indicates that the mouse immune system is activated during diarrhea. The immune response to some of these microbes persisted beyond two weeks of recovery from the laxative, suggesting that affects on the host may be long lasting.

The next step, according to Catherine Lozupone, who studies the microbiome at the University of Colorado Anschutz Medical Campus and was not part of the study, is to investigate whether laxatives affect humans in the same way and to determine how long these changes last. Another open question is what the implications of the changes are, she says. “I don’t understand yet whether having a lasting sort of memory [of commensal microbes] is going to influence your health.”

“It’s a brilliant paper,” Jonna Jalanka, who studies gastroenterological disease at the University of Helsinki in Finland and did not participate in the work, tells The Scientist. The findings will likely help researchers understand the link between microbiota changes and diarrhea in patients, such as those with irritable bowel syndrome, she says, but cautions that “this needs to be shown in humans.”