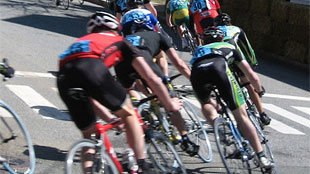 WIKIPEDIA, JOSHUA FURMANUsing sensors that detect brain activity, people can now move virtual cursors, remote-controlled helicopters, and robotic arms, just by thinking. These brain-computer interfaces (BCIs) do not involve any actual movement on a user’s part, and can even benefit paralyzed or locked-in patients for whom movement is impossible.

But new research from the University of Washington in Seattle suggests that we learn to use BCIs in the same way that we learn other motor skills, like riding a bicycle or throwing a ball. At first, it takes deliberate conscious effort and involves a network of many different brain regions. As people practice, however, the tasks become easier and almost automatic, and the network becomes much less active.

In this study, published today (10 June) in PNAS, volunteers used a BCI to move an on-screen cursor. But lead scientist Jeremiah Wander says the results will be useful in...

Wander worked with seven people who were undergoing surgery to treat severe epilepsy. Using a grid of implanted electrodes, doctors monitored their brain activity for a week to identify the areas in which seizures started.

Wander piggybacked on the procedure, using the signal from just one of the electrodes to control the movements of a cursor as it travelled across a screen. By learning to adjust their brain activity, the volunteers could steer the cursor’s path so it hit one of two targets. The electrode had become an impromptu BCI.

Meanwhile, the other electrodes registered increases in neural activity across many different parts of the brain involved in planning and executing movements. These included the primary motor cortex, primary somatosensory cortex, dorsolateral prefrontal cortex, and premotor cortex.

“This work is very exciting,” said Jose Carmena from the University of California, Berkeley, who was not involved in the study. “It shows that, as in motor skill learning, the process of BCI skill learning recruits a widely distributed network of brain areas not directly connected to the BCI.”

This is also surprising since using a BCI is both very similar and very different to other motor skills, like learning how to type. BCIs involve controlling the movement of objects, but without any movement of the user’s own limbs. They involve feedback from the eyes, but not the other senses or body parts. And they involve actions—directly modifying brain activity—that most people have never tried before.

As the volunteers became better at using the BCI, and their efforts became automatic rather than deliberate, the activity in this broad network quickly decreased. “This shows a somewhat binary transition from a novice to an expert state,” said Wander.

Wander thinks that neuroscientists could use similar changes in brain activity to assess how comfortable BCI users are with the technology. “Such signals will become especially important as we move BCI devices out of the tightly controlled lab environment and in to the field, where the way they are being used may change on a day-to-day basis,” he said.

However, John Kalaska from the University of Montreal notes that Wander’s BCI detected a specific brain wave, produced through the rhythmic firing of many different neurons around the main electrode. By contrast, many BCIs control devices use the activity of single neurons, a system that more closely mirrors the way that the brain uses neuronal signals to produce movements. If people use this breed of BCI, it remains to be seen if they would also show the same broad changes in brain activity.