In 2012, a very unusual leopard gecko (Eublepharis macularius) was born at a Florida breeding firm called Gourmet Rodent. It looked as if it had been rolled in yellow dye; its usual black spots were much smaller, and its back and legs were a vibrant, golden hue. Rare color patterns are highly valued in the pet trade, so the animal was bred to create more, and when two of these so-called “lemon frost” geckos—a male and female named Mr. and Ms. Frosty—first went up for auction in 2015, Steve Sykes, the cofounder of reptile breeding company Geckos Etc, jumped at the chance to buy them.

“This was a very special opportunity to get in early on a new base morph in leopard geckos,” he says. He bid furiously and ultimately emerged victorious, paying $10,000 for the pair.

As Sykes bred the animals with others in his collection, the color pattern of their offspring indicated to him that it was driven by a novel variation in a single gene. But he also noticed something strange: many of the animals developed mysterious white patches and even lumps in their skin. 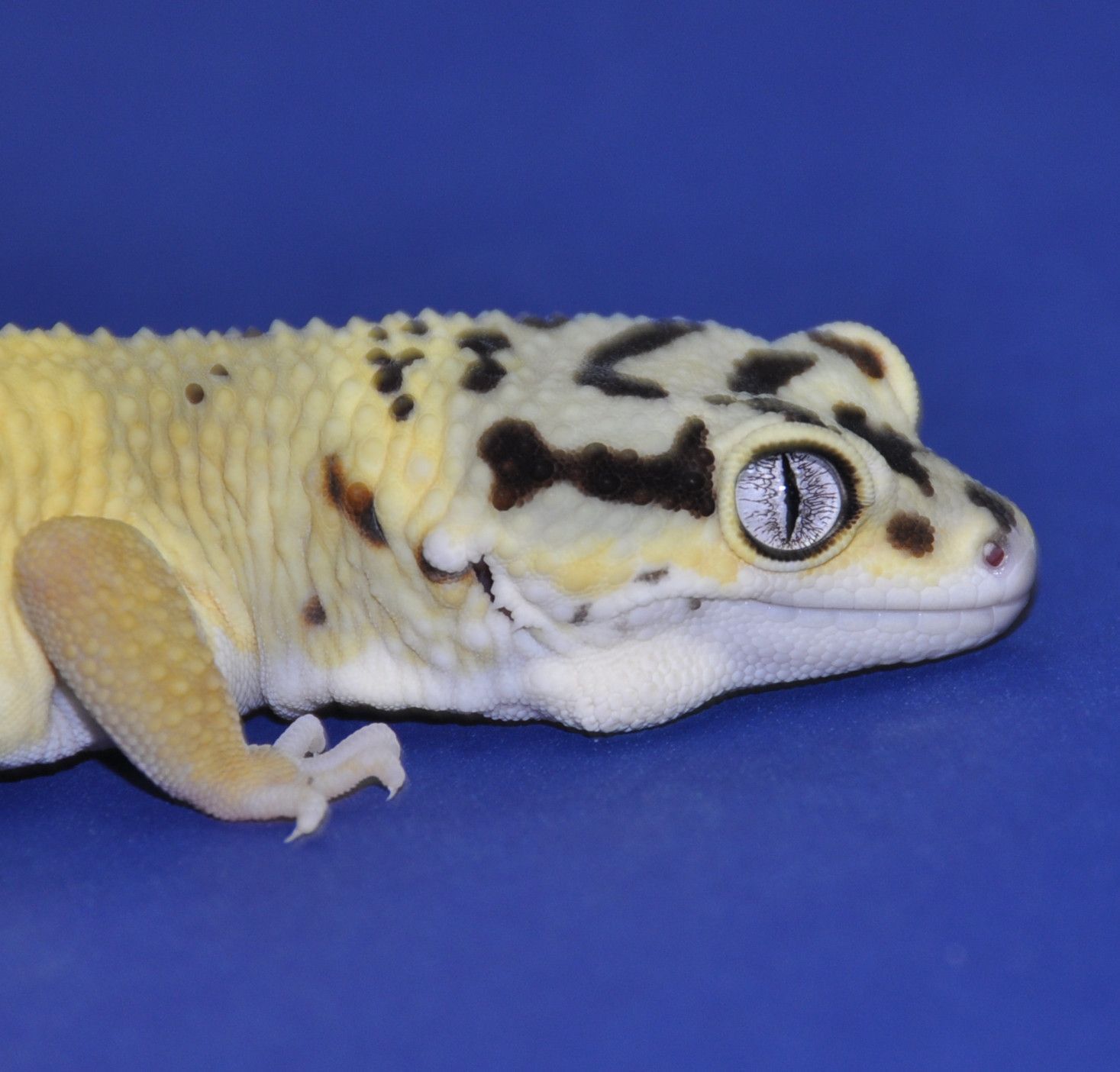 A lemon frost gecko morph with a large white lump at the base of its jaw
Longhua Guo, Steve Sykes, Leonid Kruglyak

Right when he was puzzling over what these could be, Sykes received an email from Longhua Guo, a postdoc at University of California, Los Angeles (UCLA), who wanted to study the genetics of leopard gecko color morphs. Again, Sykes saw an opportunity he couldn’t pass up. “He replied to the email very enthusiastically,” Guo recalls, and when the two spoke, Sykes suggested that Guo investigate the lemon frosts.

Guo and his colleagues followed that advice, and in a study published today (June 24) in PLOS Genetics, they provide robust evidence that the white bits are tumors, and that both these malignancies and the animals’ lemon hue likely stem from a mutation in SPINT1, a tumor suppressor gene already implicated in an aggressive kind of human skin cancer called skin cutaneous melanoma (SKCM). The findings point to geckos as an ideal model system for studying SKCM and perhaps other skin diseases, the team suggests.

Matthew Vickaryous, a biologist at the University of Guelph who uses leopard geckos as a model in his research on regeneration but was not involved in this work, says he was “pretty jazzed up” by the “compelling” study. “To see reptiles being used in a context that has biomedical relevance, for me, is always really exciting, because I think they’ve long been overlooked,” he says.

“It goes to show you that all kinds of organisms are susceptible to disease and cancer,” says Craig Ceol, a cancer biologist at University of Massachusetts Medical School who was also not involved in the study. He says he found the paper “very interesting,” as it suggests that the processes underlying cancer and other diseases can be conserved across distantly related species.

To figure out the genetic basis of the lemon frost’s unique coloration, Guo—with help from his postdoc advisor, Howard Hughes Medical Institute Investigator and UCLA geneticist Leonid Kruglyak—took advantage of Sykes’s detailed breeding records and extensive collection of animals. Based on a gecko’s looks and genealogy, Guo could determine whether it had zero, one, or two copies of the lemon frost allele, and because the team also knew the allele arose recently, they were able to perform an analysis called homozygosity mapping to pinpoint its location in the genome. Homozygosity mapping essentially involves searching through snippets of genome from individuals with two copies of the target gene to find regions that lack differences between the maternal and paternal DNA, as a newly arisen allele hasn’t had time to develop additional mutations. Any hotspots of similarity can then be checked against sequences from individuals known to carry one or no copies of the allele.

In all, the researchers obtained genetic sequences from 159 geckos, and their mapping analysis pointed to a region of the genome that contains just one known gene: SPINT1, which encodes the protein serine peptidase inhibitor, Kunitz type 1.

As the genetic analyses were underway, it became clear to the research team as well as to an independent research group that published a study last year that the white patches were tumors, more specifically, iridophoromas caused by the over-proliferation of skin cells called iridophores. Iridophores contain crystal structures that alter the animals’ skin color by reflecting light, and they’re developmentally similar to melanophores, skin cells that contain the pigment melanin and the kind of cell that melanomas consist of.

That’s when it all started to click, say Guo and Kruglyak. An increased abundance of iridophores overall explains the yellow skin, as the reflective crystals brighten up colors. Indeed, crosses of lemon frosts with a spotless morph called “blizzard” were yellower than pure blizzards are. Additionally, studies in humans and zebrafish have suggested SPINT1 is a tumor suppressor gene associated with skin cancers, especially melanomas. The pair partnered with a veterinary team to get an even closer look at the geckos’ abnormal growths and discovered that not only did the tumors contain densely packed iridophores, but each cell was overstuffed with reflective crystals—hence, the white appearance.

Sykes says he doesn’t know if the tumors will kill the geckos, as some lumps can stay small for years while others grow quickly. To protect the animals’ quality of life, he euthanized those that developed iridophoromas. 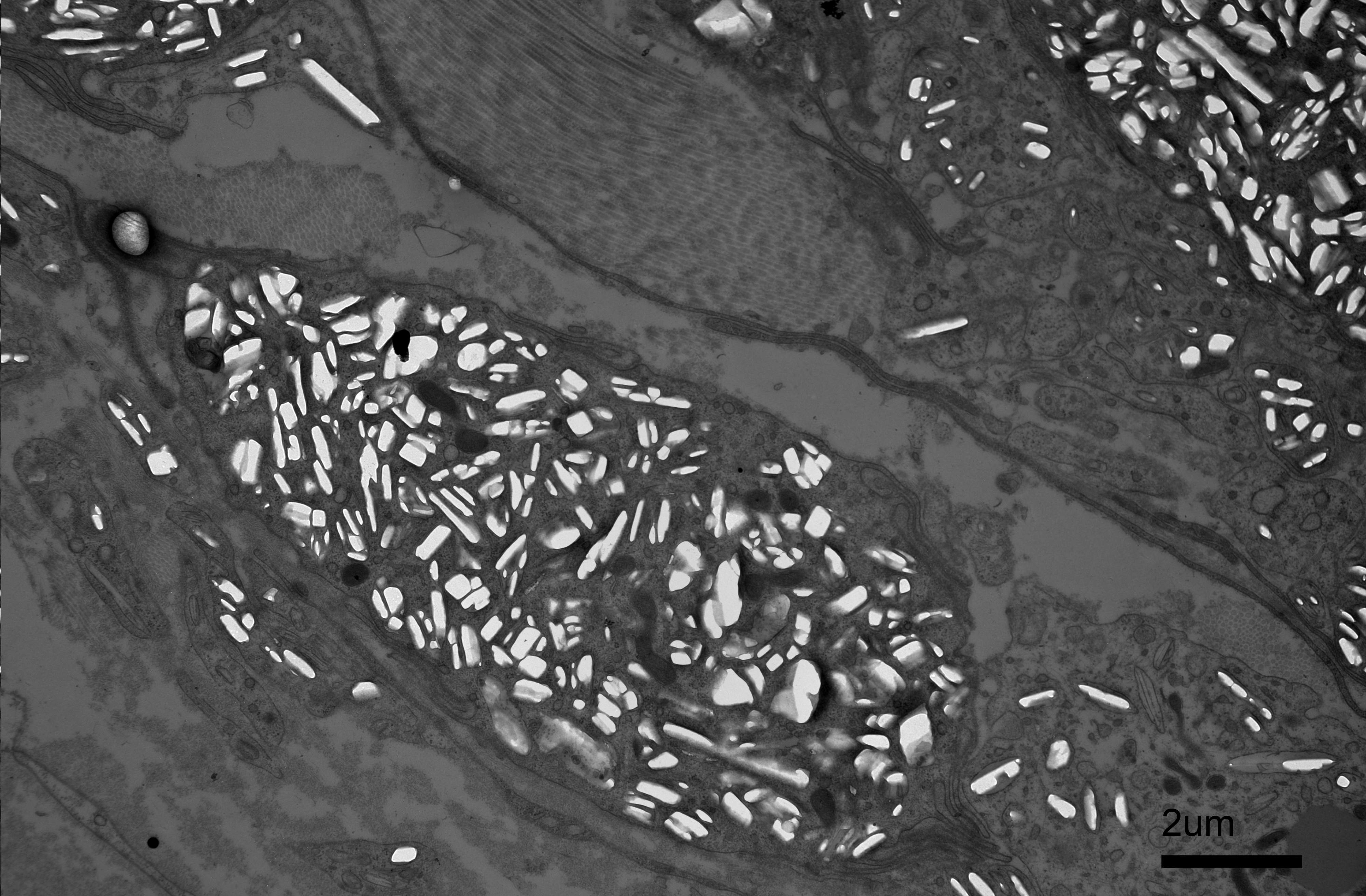 A scanning electron micrograph of the inside of an iridophoroma, a tumor caused by an over-proliferation of iridophores, each of which contains more crystals (the white shapes) than normal iridophores.
L. Guo et al./PLOS Genetics 2021

Exactly how alterations to SPINT1 influence melanoma formation remains enigmatic. Research in SKCM patients has associated reduced expression of the gene with poorer outcomes, but mice lacking SPINT1 die as embryos, which limits the opportunity for in-depth investigations into the protein’s molecular roles. That’s exactly where the geckos could shine, says Vickaryous. “In this morph, [the tumors are] a spontaneous phenomenon, which makes it a really attractive platform to do investigations on,” he says.

Ceol currently uses zebrafish to study melanomas, but says he’d consider geckos if their tumors are metastatic. That’s because there are “very, very few models” where a tumor naturally forms in an animal and then metastasizes on its own, he says. Most studies rely on orthotopic transplantation instead, when tumor cells are injected into the bloodstream and allowed to colonize various parts of the body. While that kind of experiment can teach scientists a lot about how tumors settle into new locations, “you can imagine that leaves out many steps of metastatic progression, like releasing from the primary tumor, [and] getting into the lymphatic system or into the bloodstream,” he says.

Guo’s group documented tumors in multiple regions of the animals’ bodies, including their mouths and livers, a result that the researchers interpreted as evidence for metastasis. However, the crystalline nature of the tumors prevented the kind of genotyping that could show how multiple tumors arose from a primary one—a step required to truly document that the tumors spread on their own, says Ceol.

Even if they aren’t metastatic, Ceol notes, mixing different morphs and documenting any changes in tumor progression could provide novel insights into SPINT1’s role in tumor formation or skin cancers more generally. Guo notes that some animals clearly develop tumors earlier in life—in a matter of months, instead of years—which he says suggests other genes are influencing cancer progression. Further detail on that phenomenon, especially how it relates to morph, could be very revealing. He also says he’d like to try culturing the cancerous iridophores to develop a new cell line for investigating tumor pathways as well as potential treatments.

In fact, though they might not seem an obvious choice, leopard geckos could make for good laboratory models more generally, Vickaryous says. They’re relatively long-lived, a manageable size, easy to care for, and have a docile temperament, he notes, and the wide phenotypic diversity makes them even more intriguing. For instance, while he currently uses wildtype geckos in his regeneration studies, he’s curious if the unique skin of lemon frosts behaves differently in response to wounding.

Most of the time, when researchers are considering species for modeling, “we almost get tunnel vision,” he says, focusing on mice and zebrafish while “the rest of the diversity goes completely unnoticed.” He adds that while geckos likely won’t replace mice or zebrafish, “they’re in many ways equally valuable, and more investigations should look beyond what have become routine animals in the lab.”

“I don’t know that I want to make a major case for advancing leopard geckos as the next laboratory mouse or something,” says Kruglyak, but notes that the idea isn’t unprecedented. After all, selective breeding to create unique variations for the pet trade is how mice got their start in science, too, he points out. “Back in the 19th century, there were all these fancy mice and mouse fanciers who kept them, and they developed all these strains,” which then became popular study animals after the field of genetics took off. So, maybe, something similar could happen with geckos—and if it did, meticulous record-keeping breeders like Sykes would prove invaluable.

Sykes says he’s happy he partnered with Guo and Kruglyak, and would “absolutely” do so again. “There’s a lot of future potential research that could be done” in leopard geckos, he says.

As for Mr. and Ms. Frosty: after a few years, they started developing tumors and were donated to science. Sykes says he no longer breeds lemon frost geckos and has no plans to breed them in the future, given their high risk of cancer. As for the $10,000 he spent on animals that he ultimately isn’t breeding or selling—“well, it is what it is,” he says.