ABOVE: Meyers educated the communities around his clinics in Burundi and Zaire about the bacterial origin of leprosy. Here, Mycobacterium leprae (red) is shown invading the nerve tissue of a leprosy patient.
CDC, ARTHUR E KAYE

Wayne Meyers, a physician-scientist who treated leprosy in central Africa and later studied the disease as a researcher with the US military, died at his home from cerebrovascular disease last month (September 12). He was 94.

Meyers was a leading expert on leprosy pathology and on tropical infectious diseases in general, giving nearly 500 lecture presentations and coauthoring more than 400 scientific publications. His son, George Meyers, tells The Washington Post that as a doctor, Meyers treated his patients with a level of care that was unusual for the time given the general fear and lack of understanding around leprosy, a wasting disease caused by the bacterium Mycobacterium leprae. “When he treated his... 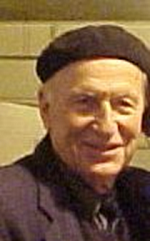 Born in the summer of 1924 in rural Pennsylvania, Meyers grew up in a family of farmers, attending the local one-room school in Huntingdon County until enrolling at Juniata College in 1941. After interrupting his studies during the second world war—Meyers spent two years in the Pacific with the Army—he completed an undergraduate degree in chemistry in 1947. By 1960, he earned an MS and PhD in medical microbiology from the University of Wisconsin, and an MD from Baylor College of Medicine.

In 1961, Meyers joined the American Leprosy Missions. He and his wife Esther, whom he’d met during a two-year stint studying at the Moody Bible Institute in Chicago several years before, traveled to Burundi and, later, Zaire—now Democratic Republic of Congo. Over the next few years, he oversaw the treatment of thousands of leprosy patients while conducting research on the condition, along with Buruli ulcer—a necrotizing skin infection caused by M. ulcerans—and other infectious tropical diseases.

On returning to the United States in the 1970s, Meyers spent a short time at the University of Hawaii before moving to Washington, DC, to lead the microbiology unit at the Armed Forces Institute of Pathology (which closed in 2011). His work with the World Health Organization on river blindness, or onchocerciasis—a tropical disease caused by a parasitic worm—helped lead to a drug to treat the disease.

“The work Wayne did was absolutely essential and helped change science in amazing ways,” Aileen Marty, a Florida International University professor and former colleague of Meyers at the Armed Forces Institute of Pathology, tells The Washington Post. “First and foremost, he was a profoundly humane man. . . . He was a scientist, he was a researcher, and he was a compassionate physician.”

Meyers is survived by his wife, four children, and four grandchildren.