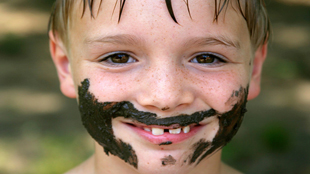 Maybe it’s okay to let your toddler lick the swing set and kiss the dog. A new mouse study suggests early exposure to microbes is essential for normal immune development, supporting the so-called “hygiene hypothesis” which states that lack of such exposure leads to an increased risk of autoimmune diseases. Specifically, the study found that early-life microbe exposure decreases the number of inflammatory immune cells in the lungs and colon, lowering susceptibility to asthma and inflammatory bowel diseases later in life.

The finding, published today (March 21) in Science, may help explain why there has been a rise in autoimmune diseases in sterile, antibiotic-saturated developed countries.

“There have been many clues that environmental factors, particularly microbiota, play a role in disease risk, but there’s very little information about when it’s critical for that exposure to take place,” said Jonathan Braun, chair of pathology and laboratory...

The mammalian immune system is dramatically influenced and shaped by exposure to microbes throughout life. Epidemiological evidence suggests that early-life exposure to bacteria may be key in preventing two immune diseases: asthma and ulcerative colitis, a type of inflammatory bowel disease.

To explore that link, Dennis Kasper, Richard Blumberg, and colleagues at Harvard Medical School examined susceptibility to both diseases in germ free mice and normal lab mice. “We were surprised to learn that germ free mice were extremely susceptible to both diseases,” said Kasper, “but normal, colonized mice were pretty resistant to both.” In an attempt to reverse the phenotype, the researchers colonized germ-free adults with microbes, but nothing changed: the mice remained susceptible to both diseases. Then the team colonized germ-free pregnant females just before giving birth, and found that their pups were protected against the diseases. The results suggest that it may be critical for mammals to be exposed to the right microbes quite early in life, said Kasper.

It is also known that natural killer T (NKT) cells—immune cells that detect antigens and produce large amounts of inflammatory cytokines—play some role in both diseases. To see if these cells were involved in the susceptibility patterns, the researchers counted NKT cells in germ free and normal lab mice. Normal mice had very low numbers of NKT cells in their lungs and colon, while germ-free mice had high numbers. And once again, colonizing adult germ free mice with microbes changed nothing: the mice’s NKT cell counts remained high, and the mice were still susceptible to both diseases. But when the team used antibodies to block NKT cell activation in young germ-free mice, effectively preventing NKT cells from ever getting a foothold, the mice were protected against the two diseases, suggesting the high NKT counts were at the root of their high susceptibility.

The researchers also identified a protein made by epithelial cells called CXCL16, whose increased expression accompanied increased NKT cell numbers. The more CXCL16 that was present, the higher the levels of NKT cells. It’s possible that bacteria in early life block the production of NKT cells by blocking CXCL16, Kasper suggested, but for now that remains a hypothesis.

“They’ve identified two key players—the epithelium and the NKT cells—but it immediately opens the question of whether other cell types are also involved,” said Braun.

Though Kasper is cautious to make generalizations about how the finding applies to humans, it does fit the “hygiene hypothesis,” he said, which proposes that the increasing occurrence of asthma and other inflammatory diseases in the developed world may be due to a reduced exposure to microbes early in life. But most importantly, future studies of human microbiota and the immune system should zero in on early childhood, he emphasized. “It’s quite important to focus on this early period.”