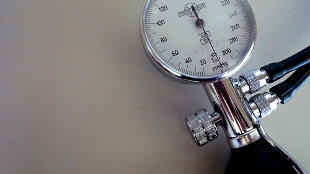 FLICKR, ROSMARYFor years, researchers have reported predictable seasonal variations in human blood pressure. Both systolic and diastolic blood pressure tend to be greatest during the winter months and lowest in the summer. Many have attributed this variation to changes in temperature, but according to a study published in the Journal of Investigative Dermatology today (January 20), variations in sun exposure may be the answer.

“This study . . . provides suggestive evidence that skin-derived NO metabolites may have a role in modulation of blood pressure upon UV exposure,” Thomas Michel, a professor of medicine and biochemistry at Harvard Medical School who was not involved in the work, told The Scientist in an e-mail

The University of Southampton’s Martin Feelisch and his colleagues first began to suspect that sunlight could affect blood pressure nearly two decades ago. At that time, the researchers were investigating the vasodilative effects of nitric...

It was more than 10 years ago that Feelisch and his team first exposed healthy individuals to short periods of high-intensity sunlight, and observed subsequent decreases in circulating nitrate and increases in nitrite, both metabolites of NO. The researchers also recorded significant reductions in blood pressure. At that time, “metabolites of NO were long considered to be biologically inert,” said Feelisch. “We started to look at the possibility to bioactivate this molecule.”

Meanwhile, other groups were reporting reductions in blood pressure as a result of dietary nitrate supplementation, which Feelisch and his colleagues had not controlled for. Temperature was another potential confounding variable. Were the effects Feelisch and his colleagues observed due to light exposure or elevated temperatures? How might dietary nitrate come into play?

In 2009, a team led by the University of Edinburgh’s Richard Weller showed that human skin and the dermal vasculature contain significant stores of NO—much more than can be found circulating in the blood—and that these stores could be mobilized by UVA (long-wave UV) irradiation.

For the present study, Feelisch, Weller, and their colleagues investigated the effects of UVA exposure—equivalent to 30 minutes of sun exposure at noon on a clear day in Southern Europe—on 24 healthy volunteers, controlling for both temperature and dietary nitrate. The researchers found plasma nitrate and nitrite changes, as well as reductions in blood pressure, that were consistent with the release of NO from skin storage. “These observations support a mechanism for the modulation of systemic NO bioactivity and a possible role of the skin in cardiovascular homeostasis,” he and his colleagues wrote.

“The strength of this study is the methodology,” said the Karolinska Institutet’s Eddie Weitzberg, a professor of physiology and pharmacology who was not involved in the work. “It is well-performed with adequate control experiments.”

One lingering question is the source of the cutaneous NO stores. Another is how, exactly, NO metabolites are released into the bloodstream. “From a mechanistic angle, it’s important to understand what contributes to determining the concentration of this storage material in the skin, and whether there is anything [else] that would facilitate translocation from the skin to the circulation,” said Feelisch. “It’s a complete black box at the moment.”

Clinically speaking, tests to evaluate blood pressure response to repeated UVA exposure with respect the age, gender, and disease states—such as hypertension—are needed. But if the blood pressure-reducing effects of UVA light hold up in larger trials, Feelisch suggested that a reevaluation of the risks and benefits associated with sun exposure might be in order. “Avoidance of sunlight may be a new risk factor for cardiovascular disease that’s never been on the map,” he said.

Still, this work is early-stage. For now, Michel said, “I certainly wouldn’t take these findings as any mitigation against the well-founded recommendation by dermatologists to avoid excessive sun exposure.”