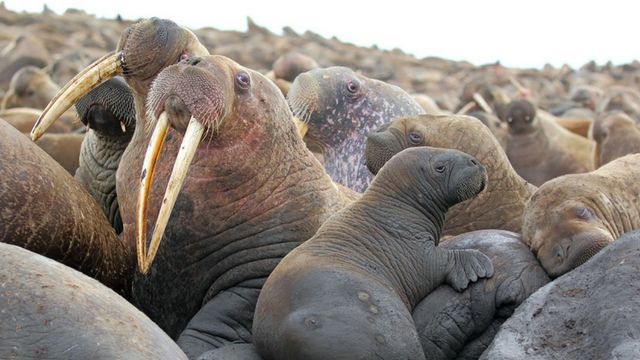 Pacific walrus (Odobenus rosmarus divergens) mother and young in Kolyuchin Island in the Russian Arctic ANDREY GILJOV, UNIVERSITY OF ST. PETERSBURG Human mothers will usually cradle their infants on their left sides, such that they can gaze into each other’s left eyes, a position thought to favor processing in the brain’s right hemisphere. A new study in Biology Letters today (January 10) shows that walruses and flying foxes are no different, having such lateralized cuddling biases during maternal care, too.

“Several decades ago, it was a popular belief that [this] brain asymmetry is only a human thing,” says the lead author of the study, Andrey Giljov, a zoologist at St. Petersburg University. But recent research has shown that in addition to humans, primate mothers tend to hold their infants to the left, and some of Giljov’s previous work demonstrated that several species of mammal infants...

A bias towards keeping a social partner on a certain side, the new study explains, reflects specialization of the brain’s right hemisphere for processing social information, as visual information is handled by an animal’s contralateral brain hemisphere. The work reveals that flying foxes and walruses not only have a left-biased cuddling preference, but also tend to rest face-to-face in the position that allows mother and young to keep each other within their left visual fields.

It’s basically solidifying the hypothesis that social information is processed more efficiently in the right hemisphere from a behavioral perspective.—Heather Hill,
University of St. Mary’s

Although walruses and flying foxes might seem like unusual study subjects, Giljov and colleagues had their reasons: They wanted mammals that have singleton offspring and tend to cradle their young for relatively long periods of maternal care. Indian flying foxes (Pteropus giganteus) and pacific walruses (Odobenus rosmarus divergens) were just right, but they weren’t easy to find. For the walruses, he and his colleagues made an expedition to the Arctic, to Kolyuchin Island in the Russian Chukchi Sea, and they went to Sri Lanka to observe the flying foxes.

The group had only old data from the end of the 19th century to go by to find the whereabouts of the bat colonies in Sri Lanka, Giljov says. The expedition crew spent days searching for them, often having to gesticulate what they were looking for to villagers. After having one bat colony fly away and another transpire to consist purely of males, they came across two colonies they were able to observe.

During the day, the drowsy, five- to six-month-old pups clung to their mothers, occasionally licking their mothers’ faces, resting face-to-face, and suckling. The researchers documented left-right bias in all of these behaviors, finding that there was a significant preference for left visual-field positioning in all but suckling. “The infant can see mothers with the left eye and the mother can see the infant with the mother’s left eye,” Giljov says.

Likewise, the walrus calves preferentially adopted a position that allowed them to keep their mothers in their left visual fields when floating before diving down to suckle and when resting in their mothers’ embrace. 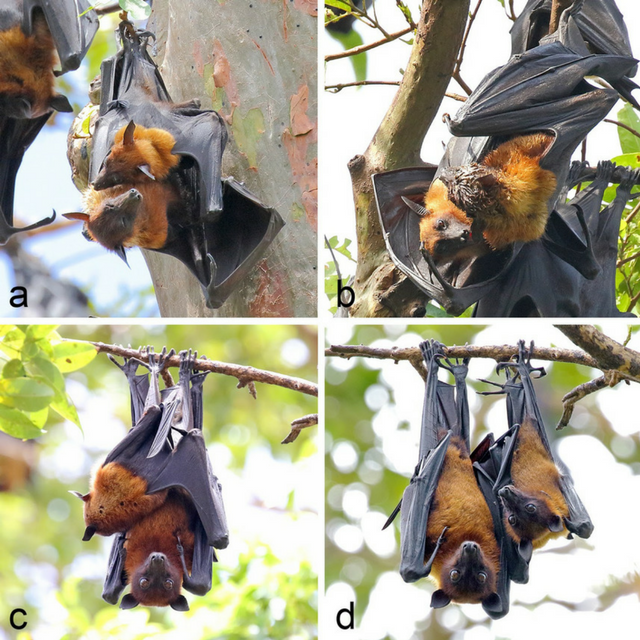 In the Indian flying fox (Pteropus giganteus), mothers and pups display a left-sided cuddling preference in face-to-face resting (a), licking each other (b), to a lesser extent, suckling (c), and hanging by their mother’s side (d) ANDREY GILJOV, UNIVERSITY OF ST. PETERSBURGFor Heather Hill, an associate professor of psychology at St. Mary’s University in San Antonio, Texas, who was not involved in the study, the results reflect her own observations in beluga whale calves, who also appear to like to keep their mum to their left. “It’s basically solidifying the hypothesis that social information is processed more efficiently in the right hemisphere from a behavioral perspective, and it’s really beginning to show the diversity of species that have evolved this capacity,” she says.

Gillian Forrester, a senior lecturer in psychology at Birkbeck, University of London who was not involved in the study, praises the robust methodology, and agrees with the authors’ interpretation that the behavior aids right-hemisphere processing. Although it has been suggested that right handedness might be a reason for humans’ preferential holding of babies to the left, she notes that left-handed people also like to hold their babies to the left.

Animal studies have shown that the right hemisphere is important in the recognition of dominant and novel external stimuli, Forrester explains. In humans, it “seems to be our dominant hemisphere for emotions and social behaviors and identifying other individuals. . . . We’re actually more expressive on our left sides of the faces than we are on the right, because of that right-hemisphere dominance.”

The expedition crew spent days searching for flying foxes, often having to gesticulate what they were looking for to villagers.

Giorgio Vallortigara, a professor of neuroscience at the center for mind/brain sciences at the University of Trento in Italy, isn’t surprised by the results. He has studied lateralized brain functions as early as his undergraduate work in the 1980s, when he noticed that domestic chicks have a preference in pecking to one side. He later found that chicks use their left eye for recognizing conspecifics, and believes that the right hemisphere is particularly talented at this task.

Vallortigara, who was not involved in the study, says that this cerebral lateralization might have evolved, for instance, to allow the brain to perform two tasks at once. “If you put language in the left hemisphere,” he explains, “you have a homologous region in the right hemisphere that is of use for other functions.”

It’s this type of speculation that Vallortigara says ought to be the focus of investigations into cerebral asymmetry going forward. “The overall field should now move from the level of the description . . . to an investigation of the ‘why,’” he says. “What is causing this brain asymmetry? What is it in the brain that makes the two hemispheres to play different roles?  . . . I think this is the challenge for the future for brain asymmetry research.”