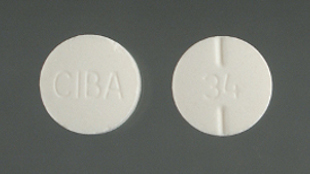 Ritalin, 20 mgU.S DRUG ENFORCEMENT AGENCYA euphoric response to amphetamine could signal the presence of gene variants associated with protection against attention deficit-hyperactivity disorder (ADHD) and schizophrenia. Publishing today (April 7) in PNAS, a team led by Abraham Palmer from the University of Chicago reported having found that DNA differences associated with amphetamine response are also correlated with a reduced risk for both conditions.

The results link two disorders that are treated in opposing ways: people with schizophrenia are often given drugs to block dopamine signaling, while those with ADHD are typically given drugs that imitate dopamine. So identifying a common feature between them is “interesting and somewhat surprising,” Philip Asherson, a molecular psychiatrist at King’s College London, told The Scientist in an e-mail. Asherson, who was not involved in the study, called the results convincing: “to have these findings by chance does seem unlikely,”...

“I might’ve predicted that whichever way it went for schizophrenia, it would go the opposite way for ADHD because of what we use to treat these disorders,” said Palmer. “But in fact, that’s not what we saw. So that’s a little bit surprising.”

Palmer’s team gave 381 healthy young adults either a 10 mg or 20 mg dose of amphetamine or a placebo pill, administering them in randomized order over the course of three visits, and then measured their responses using standard questionnaires. The participants had no idea what type of drug they were taking or whether they were receiving a placebo. “Some people really don’t like this drug, other people like it just a little bit, and other people like it a whole lot,” said Palmer. “That’s the variability that we’re evaluating, and that variability is partially genetic.”

But the team needed a control to show that these results didn’t reflect a common brain-related outcome. “One of our reviewers suggested that this [finding] might be a generic phenomenon,” said Palmer, “so Parkinson’s was an important negative control because it was [also] a brain trait.” The team’s other two controls were non-brain-related conditions—height and inflammatory bowel disease.

The researchers found no overlap of variants related to amphetamine enjoyment and those associated with any of the three control conditions. But Parkinson’s, like ADHD and schizophrenia, is a dopamine-linked disorder. Jay Nutt, a neurologist and Parkinson’s specialist at Oregon Health & Science University, who was not involved in the study, said in an e-mail that amphetamine was once used to treat parkinsonism, but was generally ineffective.

Asherson said that the choice of Parkinson’s was “OK because they found no effects with this and two other conditions,” which was “at least consistent with their view that the study of changes in mental state—euphoria—is most relevant to mental health conditions,” as opposed to a neurological disease like Parkinson’s.

ADHD and schizophrenia may share something in common beyond dopamine signaling that could be their unifying feature, said James Swanson, the director of the Child Development Center at the University of Calfornia, Irvine, in an e-mail. Swanson, who was not involved in the study, posed the question: “Why are the same genes, and the same direction of effect associated with these two disorders that have opposite dopamine-related etiologies and clinical responses to the same drug?”

Do these results mean that a taste or distaste for amphetamine could be considered as a marker for schizophrenia, ADHD, or bipolar risk? Not really, said Palmer. “We’re really just talking about degree of liking,” he explained. “It’s not an all-or-nothing.”