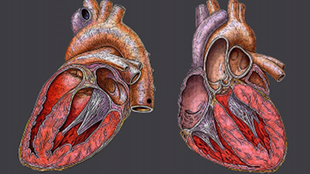 “The findings are important because they clarify a situation we know from the clinics very well,” said Göran Hansson, who investigates the links between cardiovascular disease and inflammation at the Karolinska Institute in Sweden. The results...

Macrophages are also part of the wound-healing process following a heart attack, explained senior author Matthias Nahrendorf of the Center for Systems Biology at Massachusetts General Hospital in Boston, and are recruited to the myocardial wound site to help repair the damaged tissue. But increased levels of macrophages and other white blood cells after heart attack is connected to increased risk of later heart attack and death.

To understand how heart attacks initiate inflammation that increases risk of subsequent heart attacks, Nahrendorf and his colleagues used a mouse model of atherosclerotic disease, and mimicked heart attacks by suturing the left coronary artery in mice with advanced atherosclerosis. Within 3 weeks, plaques in these mice had more inflammatory cytokines, more proteolytic enzyme activity, and more macrophage precursors called monocytes. Nahrendorf’s team also found that for several months after their heart attacks, mice had increased numbers of monocytes in the spleen, suggesting that the organ was hosting developing monocytes that could go on to worsen atherosclerosis. Sure enough, by removing the mice’s spleens just before promoting heart attacks, the researchers prevented worsening atherosclerosis.

Monocytes usually develop in the bone marrow, suggesting that this switch to splenic development was key to understanding how heart attacks accelerate atherosclerosis. Indeed, said Nahrendorf, preliminary studies examining spleens of patients killed by heart attack show higher numbers of monocyte progenitors in the spleen than victims of car accidents. Digging further into the mechanism of this shift to the spleen, Nahrendorf and his collaborators found that signals from the mice’s sympathetic nervous systems during heart attack caused monocyte progenitor cells to leave the bone marrow and accumulate in the spleen. Treating mice with beta blockers, which disrupt signaling involved in the fight-or-flight response and are often prescribed to cardiac patients to correct heart rhythm, prevented the cells from exiting the bone marrow and halted increased inflammation in their plaques after heart attack.

“We already use beta blockers to treat [heart attacks] because they’re thought to treat imbalances in contractile machinery,” Hansson explained, but preventing release of monocyte progenitors from bone marrow “may be part of their benefit.”

Other researchers are also aiming to tame inflammation after heart attacks, though like the current study, so far these techniques have only been tested in mice. Armand Keating, a transplantation researcher at the University of Toronto, and colleagues showed that infusions of mesenchymal stromal cells (MSC), which are involved in tissue repair and immune modulation, can help convert macrophages to an anti-inflammatory phenotype in mice, which could help prevent secondary heart attacks, he said. “It would be very exciting if MSCs could make this switch in humans, too,” Keating said.

For now, Nahrendorf hopes that the research prompts investigators to take a more global look at heart attack treatment and prevention. Instead of looking just at the plaque, he says, “I hope they zoom out a little bit.”