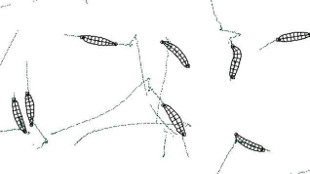 Multi-Worm Tracker software tracked time-varying contours of larvae.COURTESY OF J.T. VOGELSTEIN ET AL.Neuroscientists have a new guide to consult as they work to understand the functions of the fruit fly’s neural architecture. Researchers from the Howard Hughes Medical Institute’s Janelia Farm Research Campus in Virginia and Johns Hopkins University in Maryland have recorded and classified the behavioral effects of activating sets of neurons throughout the Drosophila larval brain. Together, the activated cells comprise the majority of the larval brain’s 10,000 neurons, the researchers found. Their work was published today (March 27) in Science.

“They’ve come up with a framework to more or less completely describe what it’s doing when you’re acutely stimulating neurons,” said William Schafer, a neuroscientist at the University of Cambridge who did not participate in the research. “I think it’s really nice.”

This work “gives me some hope that we can actually understand...

The Janelia Farm-led team took advantage of several tools developed in recent years, including optogenetics. With access to more than 1,000 Drosophila lines with the GAL4 gene inserted into clusters of two to 15 neurons, the team took flies that had been engineered to selectively express the light-sensitive protein channelrhodopsin in the presence of GAL4 and bred them with the GAL4 Drosophila lines. This produced lines of flies with small subsets of neurons that the researchers could activate with light.

Next, the researchers placed groups of genetically engineered larvae into plastic dishes and activated their neurons while videotaping their movements. To track the larval movements, they used a multi-worm tracker, a set-up involving a high-resolution video camera and software that translates the video into simplified data depicting movements and contours. The worm tracker was originally developed to track the movements of the nematode Caenorhabditis elegans, but is well-suited to track worm-like fly larvae.

The researchers tracked multiple larvae for each GAL4 line, recording the movements of 37,780 flies in total. “That’s all great, but then the real difficulty becomes dealing with the behavioral data,” said coauthor Marta Zlatic, a neuroscientist at Janelia Farm.

Zlatic’s team consulted statisticians at Johns Hopkins. Historically, neuroscience researchers have either classified larval or worm movements by hand or taught machines to automatically spot pre-defined movements. But for this study, the researchers decided to take a different approach. In collaboration with the Johns Hopkins experts, they applied a data analysis technique to subdivide the types of larval movements automatically into a branching tree of behavior types.

At the tree’s most detailed level, the technique identified 29 distinct behavioral sequences. The researchers found that many of the broad categories appeared similar to behaviors scientists had previously recorded. These categories included such moves as the “wiggle escape,” the “straight escape,” the “turn-turn-turn,” and the “back up.” But it was more difficult for the researchers to distinguish between the most intricately subdivided behaviors, as the data analysis-driven approach had.

“It seems that they have discovered new types of behaviors that have not been identified before, and they can validate behaviors that have already been classified by humans,” said Alipasha Vaziri, a neuroscientist and physicist at the University of Vienna and at the Research Institute for Molecular Pathology, who was not involved in the work.

Finally, the researchers linked the behavioral sequences to their associated neurons. Zlatic noted that a given set of neurons might contribute to multiple behaviors. The relationships between groups of neurons and behaviors seemed probabilistic—activating neurons in individual animals with the same genetic backgrounds did not always have the exact same effect, but groups of neurons did appear to be associated with certain behavioral outcomes.

Zlatic is also working on generating a wiring diagram of the connections between the neurons in larval Drosophila. She hopes to soon combine her neural-behavioral map with her wiring map in order to understand how chains of neurons produce behaviors.

“It gives them a way to look at their [Drosophila] lines, and the ones that cause the same behavioral sequences, presumably those could be in the same neural circuit,” said Schafer. “It gives you a way to start mapping circuit space.”

Zlatic noted that her colleagues at Janelia Farm aim to make neural-behavioral maps in adult flies, which have 10 times as many neurons as larvae. And producing a neural-behavioral map for mice is another long-range goal. For now, Zlatic is focusing on larvae because of their relative simplicity. “The goal is to extract general principles about nervous system function,” she said.

Samuel pointed out that as neuroscientists produce more and more data through projects such as the BRAIN initiative, collaborations with statisticians will be key. The larval neural-behavioral map is an encouraging sign that such collaborations can work, he said.

“There’s a huge amount of work to be done, but this is a nice resource that can begin to partition cells to different behaviors,” said Samuel. “This is an excellent starting point.”