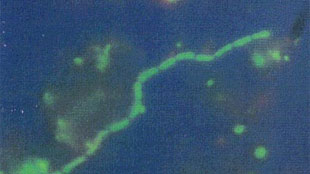 In the northern Pacific Ocean, buried 20 meters below the ocean floor, are bacteria that live life in the extreme slow lane. They have not received any fresh sources of food since they were buried 86 million years ago, when dinosaurs still walked the land. Still, they cling to life by using up the little oxygen available to them at an incredibly slow rate.

“Their activity is so slow that on our timescale, nothing happens at all,” said Hans Røy from Aarhus University, who discovered the microbes. “It’s much less than any laboratory culture we have.”

“Besides being interesting on its own, it has large implication for the potential of life in other low energy environments such as the subsurface of Mars,” added Arthur Spivack from the University of Rhode Island, who was not involved in the study.

Extremely slow-going bacteria were discovered in the surface of the ocean floor in the 1990s, but many scientists initially dismissed them as dead. A Japanese group challenged that idea last year, when they showed that cells buried in sediments from the Sea of Japan could grow if they were given a fresh source of nutrients. Now, Røy has gone one step further by measuring the metabolism of subsurface bacteria in their native soil, and confirming that they are alive, if barely so.

The team collected the buried microbes on a research cruise that sailed west along the Equator from the Galapagos Islands, before turning north into a rotating collection of currents called the North Pacific Gyre. At nine stops along the way, the researchers drilled into the ocean floor to collect cylinders of sediment, 28 meters deep.

Oxygen levels typically peter out within a few centimeters of the sea floor. But Røy found that sediments beneath the gyre contained oxygen at record-breaking depths of 30 meters or more, because they settle so slowly. “If a grain sits on top of the surface, it will take a thousand years for something to sit on top of it,” he said. By the time new grains are buried, they have been stripped off all possible nutrients by surface microbes, leaving any organisms below with very little to eat. As a result, subsurface microbes maintain incredibly slow metabolisms, using up little of the buried oxygen.

By probing the sediments with needle-shaped oxygen sensors, Røy calculated that each of the deepest bacteria used up just 0.001 femtomoles of oxygen per day. To put that into perspective, if you put sediment from the North Sea into a sealed container, the microbes inside would use up all the oxygen in a few minutes. “If we did the same thing with our sediments, it would be 1,000 years before we could even measure a change,” said Røy.

"This adds to the growing evidence that sub-seafloor [microbes] survive on remarkably low energy flux and are very different from the live-fast-die-young microbes in near surface environments or laboratory cultures,” said John Parkes from Cardiff University.

Parkes also thinks Røy’s estimate may be generous. The technique the researchers used likely missed some of the cells in the sediment, undercounting the population. “The metabolism per cell is likely to be even lower!” Parkes said.

These microbes may be idling close to the minimum limit for life. They produce so little energy that they cannot even turn the whip-like flagella that allow them to move.

It is not clear how the bacteria manage with so little oxygen. “We have no clue about that at all,” said Røy. And it will be a difficult mystery to solve, especially since most of the current knowledge about microbes comes from studying them in fast-growing cultures, he added. “The very method we use to study them excludes any knowledge about something that grows this slowly.”

Another mystery revolves around the age of the cells that Røy found. They must be at least a thousand years old, but they could be much older. “If they grow this slowly and they’re still alive, then they’re also not dying very fast,” said Røy.