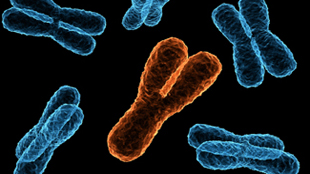 The study, reported this week in Nature, compared the newly sequenced Y of the rhesus monkey to human and chimpanzee Y chromosomes, and found that the primate Y has been remarkably genetically stable for the past 25 million years.

“This and other evidence suggest that some of these genes are important and have been retained in primate lineages,” said Mark...

But not everyone agrees. “I don’t think this means we can relax about the human Y chromosome,” said Jennifer Graves of La Trobe University in Melbourne, Australia, who was also not involved in the study. Graves has been an outspoken advocate of the rotting Y theory, and, in a 2006 review of the subject, predicted that the Y chromosome will decay in an uneven, jerky process. The new data support that prediction, she argued. “One can’t predict [the degradation of the Y], because it’s a very stochastic process,” she said.

Roughly 300 million years ago, during early mammalian evolution, a segment of the X chromosome stopped crossing over with the Y, causing rapid genetic decay on the Y. This occurred another 4 times throughout the history of mammals, and each time the Y chromosome experienced gene loss. The events were so extensive that today the human Y retains only 3 percent of the more than 600 genes it once shared with the X chromosome.

Prior to the present study, only the human and chimpanzee Y chromosomes had been sequenced, though numerous organisms, from fish to insects to plants, have independently evolved Y chromosomes. Jennifer Hughes, David Page, and colleagues at the Whitehead Institute for Biomedical Science in Cambridge, Massachusetts, sequenced the Y of the rhesus monkey and compared it to the other two sequences. Chimpanzees diverged from humans only 6 million years ago, but rhesus monkeys diverged 25 million years ago, so the new information provides a look at how the primate Y chromosome has changed over a much longer period of time. Genetically speaking, it hasn’t changed much.

The rhesus monkey hasn’t lost a single ancestral gene on its Y chromosome in the past 25 million years, and the human Y has lost just one gene in that period. The Y chromosome’s evolution, therefore, is marked by periods of swift decay followed by strict conservation, said Hughes. And that should put the “rotting Y” theory to rest, she added. “We finally have this very strong empirical evidence that there’s been essentially no change in gene content for 25 million years,” she said. “I’m pretty sure it’s going to be hard to argue with that.”

Yet the study also revealed that the rhesus Y does not have large sections of repeated DNA sequences, called palindromes, that the human and chimpanzee Y chromosomes both have, Graves pointed out. “This means human and chimp lineages must have quite recently gone berserk and made lots of copies,” she said. “To me, that amplification is the last gasp of the Y chromosome.” Two Japanese rice rat species, for example, recently lost their Y chromosomes, and a third has a Y that is now making lots of palindromes. That Y chromosome has “gone bananas,” said Graves, signaling that it will soon disappear as it did in the other two species.

Whether the Y continues to degrade or not, the fact that a core set of genes has stuck around, despite major loss events, suggests that these genes were selected for by natural selection. “The genes that are still on the human Y chromosome have been around for a long time, and that suggests they must actually be doing something useful,” said Jobling. Unfortunately, scientists don’t know what that is. “The Y chromosome has been neglected,” he said. Beyond sex determination, “we really have very little idea” what most of the genes on the chromosome do.

“But we’d love to know,” added Hughes, who plans to follow up the research with functional studies of the conserved genes. The team also plans to sequence Y chromosomes from other animals, including the rat, mouse, and opossum. “They have interesting positions in the mammalian tree and are model organisms,” Hughes said.