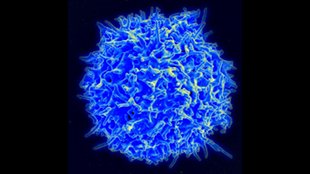 WIKIMEDIA, NIHResearchers have tracked a type of immune cell called T memory stem cells in patients who received infusions of genetically modified lymphocytes more than a decade ago. According to a paper published today (February 4) in Science Translational Medicine, the team found not only that a population of the stem cells are still present, but also that they give rise to other types of T lymphocyte.

“For the first time there is monitoring of the clonal dynamics of T memory stem cells in humans for a long period of time—up to 12 years,” said transplantation and immunology expert Luca Gattinoni of the National Cancer Institute who was not involved in the work. “It provides the best evidence so far of the ability of stem cells to survive . . . and to sustain an adult T cell population.”

These dual-personality cells were discovered four years ago by Gattinoni and colleagues and since then have generated much interest for their therapeutic potential. “Basically the advantage of these cells is their long-term capacity to survive upon adoptive transfer and the extremely robust proliferative potential that these cells have upon encounter with the antigen,” said Gattinoni. “We’ve found that these cells are much more effective at [fighting] cancer and [maintaining] long-term cancer regression” in mice than central and effector memory cells.

But how these memory stem cells behave when transferred into humans was unknown. To find out, Biasco and his colleagues studied patients who had received infusions of lymphocytes—either peripheral blood lymphocytes or hematopoietic stem cells—that had been genetically modified to correct a mutation causing severe combined immunodeficiency disease (SCID). The infusions were performed over a decade ago, so the new analyses were “a clever way to use old studies to address new questions,” Gattinoni said.

Using blood samples taken from the patients at different time intervals, the team tracked transplanted cells and their progeny by way of the unique integration sites of the retroviral vector used to engineer the cells. “Because the [retroviral] gene integrates in different genomic sites, they can actually follow individual T cell clones over decades in these people,” said Donna Farber, a professor of surgical science, microbiology, and immunology at Columbia University in New York City who was not involved in the study. “That is really cool.”

Biasco sorted the cells into different T cell subtypes and found that the T memory stem cell population was more likely to share integration site signatures with the central and effector memory T cell populations than vice versa. Put simply, this indicated that the memory stem cells transplanted over a decade ago had both remained as memory stem cells (self-renewed), but also differentiated into central memory and effector memory cells. “This is the best evidence that these clones were active in vivo for a long period of time, and that they were also generating other subsets,” Biasco said.

The team also showed that, over the years, the range and balance of clones remained fairly stable. “Because of the long-term survival capacity of these cells there is always concern about potential transformation and oncogenicity,” explained Gattinoni. But, said Farber, the team has shown that “you’re not getting leukemias, you’re not getting these weird clonal expansions. . . . The T cell repertoire didn’t really alter that much after infusion.” And from a safety perspective, she said, “I think that is important to know.”