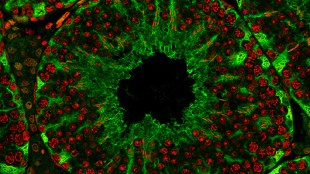 A microtubule-regulating enzyme integral to spermiogenesis may be target for future male contraceptive or fertility treatments, according to research published today (May 24) in PLoS Genetics. An international team of researchers identified a new enzyme, KATNAL1, which appears to regulate spermatid maturation in mice by controlling the cytoskeleton dynamics central to sperm cell development.  Scientists hope elucidation of KATNAL1’s role in spermiogenesis may illuminate previously unknown causes of male infertility or provide a target for non-hormonal male contraceptive strategies.

“It’s an important study,” said Yan Cheng who investigates male contraception at the Population Council in New York and was not involved with the study. Cheng noted that it is the first study to report how loss of a microtubule-regulating enzyme affects sperm maturation and opens the possibility of using strategies to block or delete the...

Though KATNAL1 was expressed in a variety of tissues, including brain and liver, only the testes of mice with a mutated form of the gene appeared grossly abnormal, with smaller than normal testes. Overexpression of KATNAL1 in a human embryonic kidney cell line demonstrated a similar effect on the cytoskeleton as KATANIN, which regulates microtubule dynamics by severing microtubule filaments.

The mutation in the infertile mice is localized to the ATP-binding domain of KATNAL1, and appears to ablate its function. In the KATNAL1-mutated mice, mature sperm cells were largely absent. Instead, the researchers found prematurely-exfoliated immature cells in the epididymis, and fluorescent imaging of microtubules in Sertoli cells showed that mutated KATNAL1 expression correlated with fewer stable microtubules.

Cytoskeleton dynamics are a critical regulator of sperm cell maturation. A specialized set of polarized cells, called Sertoli cells, chaperone post-meiotic sperm cells as they develop from a round, cytoplasm-rich immature state to their lean mature state, having grown tails and lost excess cytoplasm. Sperm are closely associated with Sertoli cells during their development, like apples on an apple tree, explained Smith, and rely on them for nutrients and transport to the lumen of the seminiferous tubules. Like apples, mature sperm will “drop off” (known as exfoliation) when “ripe.” The transport and delivery of nutrients to the sperm depends on dynamic microtubule filaments.

“We’ve identified a novel pathway important in male fertility,” said Smith, who said he hopes that further investigations will illuminate other players involved in KATNAL1 regulation and microtubule dynamics in sperm maturation. It may be possible that KATNAL1, or a different component of this microtubule-regulating pathway, could be a non-hormonal target for a male contraceptive drug, Smith added.

Non-hormonal male contraceptive strategies are appealing for several reasons, said Mara Roth, an endocrinologist at the University of Washington who did not participate in the research. Many men respond well to hormone treatment, but about 5 to 10 percent of men don’t show a drop in sperm counts in response to hormones, she explained. In contrast to female hormonal contraception, which targets one egg per month, male contraceptive strategies need to deal with the extraordinary number of sperm produced on a daily basis—upwards of 1000 per second. And even after vasectomies, Roth noted, some men don’t follow up to make sure their sperm count has dropped. The challenge in using KATNAL1 as a possible target of contraceptive drugs, she said, is in ensuring that their action will be both reversible and restricted to the testes.

Other scientists agreed that determining KATNAL1’s role in cells beyond Sertoli cells is an important next step. Cytoskeleton regulation within sperm cells is also an important component of germ cell maturation, said Ann Sperry, who studies sperm head shaping at East Carolina University and was not involved with the study. Some sperm did appear to mature in KATNAL1-mutant mice, but it’s unclear if their cytoskeletons are also dysregulated, and whether this also contributes to the infertility phenotype.

“KATNAL1 opens promising and interesting avenues to further research on this theme as demonstrated in this beautiful scientific contribution," R.-Marc Pelletier, who investigates sperm maturation and infertility at the University of Montreal and was not involved with the research, wrote in an email. "Additional information on the systemic and topical enzymatic activity of the enzyme could contribute to clarify its real implication in the regulation of male fertility. However, the full resonance for future treatment of male fertility and the development of non-hormonal male contraceptives based solely on the use of KATNAL1 may require more supportive investigation.”

In the meantime, Smith hopes that KATNAL1 may help researchers understand more mechanisms underlying human male infertility. He and his collaborators hope to discover more regulators of microtubule dynamics in Sertoli cells. If this pathway proves to underlie infertility in men, there is a possibility of using gene therapy to reverse it, said Smith, whose group is currently attempting this feat in KATNAL1-mutated mice.