When Dan Otte, curator of the entomology department at the Academy of Natural Sciences in Philadelphia, went to his 53-year high school reunion in South Africa earlier this year, he was confronted by several female classmates who demanded an explanation for the mysterious doodles he'd left in their autograph books half a century earlier.

Instead of penning fond rememberances, Otte drew baboons and antelopes jumping over bushes and being pounced on by lions. “I never knew what to say to girls,” he says.

Although he says he has no recollection of doing those sketches, Otte has been drawing what he sees ever since he can remember. Growing up in Zululand, South Africa meant he was privy to some spectacular scenes.

“I was always drawing antelopes jumping over things and the rear ends of tractors and trucks,” Otte says. “I was fascinated...

For the past four decades, however, Otte has devoted his artistic skills to capturing the anatomical details of thousands of grasshopper and cricket species found all around the world. Contained within several wieghty tomes, his illustrations serve as definitive guides to the identification of the insects.

Otte is one of six children born to Lutheran missionaries stationed in Durban, South Africa. Although he grew up with a front-row view of African wildlife, it wasn’t until he went to the University of Michigan for his bachelor’s degree that he even knew the field of animal behavior existed.

There, under the tutelage of entomologist Richard Alexander, Otte was encouraged to do a PhD on the communication behavior of grasshoppers. But he quickly realized he was entering unexplored territory.

Despite the university’ sizeable collection of grasshoppers, Otte had no efficient way of classifying the hundreds of specimens he was collecting from across the US. “There was no identification manual for North American grasshoppers,” he says.  “So I told myself, ‘I’m going to do that.’”

And he did. Using photographs and dead specimens as models, he painstakingly sketched and painted the insects using colored pencils and watercolors. His effort resulted in The North American Grasshoppers series, published in two volumes in 1981 and 1984.

From there he moved on to studying and cataloguing crickets in Hawaii, Australia, and the Caribbean. All in all, he has described 1239 new species of grasshoppers and crickets and is credited with identifying 20 percent of the planet's 5,000 cricket species known to date. Grasshoppers from the genus Boopedon, or "Boopies."
ACADEMY OF NATURAL SCIENCES

Flipping through the pages of his first book, The North American Grasshoppers, Volume 1, on a recent Friday morning in his top-floor office at Academy of Natural Sciences—where he’s been since 1975—the 72-year-old Otte recalls how he was able to tell species apart by poring over the minutiae of their anatomy, such as the structure of the male genitalia, the color and vein patterns in the wings, and indentations and bony formations of the caparaces. Flailing his arms and shaking his body, Otte recreates grasshoppers’ mating calls as if they were his second tongue.

Otte is currently focusing on grasshopper species in the Rocky Mountains as well as African crickets. “There are lots of undescribed species to be found there,” he says. For his magnum opus, Otte wants to combine all past volumes with his recent work into one book which he hopes to publish in 2014. “It’s going to be one big fat thing.”

Seldom told in Otte's compendia of crickets and grasshoppers drawings are the harrowing tales that result from his collecting trips in remote corners of the world. His office décor attests to these adventures. Big-game skulls hang from the walls (decomposing buffalo skulls are the best place to look for crickets in Africa, Otte says). A collection of sands from deserts around the world sits next to the big, paned windows overlooking Philadelphia’s Logan Square.

Otte has braved angry hordes of feral cattle in central Australia, survived dangerously curious lions in the Serengeti, and lived to tell about the time hyenas raided his campsite in Zimbabwe. During a field trip in Hawaii, Otte was collecting crickets along a narrow road bordering a dizzyingly steep precipice. Per his method, he’d stomp repeatedly on the bushes, then wait for the crickets to spring up. But one careless step sent him over the edge.

A hanging branch broke his fall. Otte cracked a rib, but that well-placed tree saved him from a 200-foot, fatal drop. “But the closest I’ve ever come to dying was being hit by an Argentine bus,” Otte continues. When the bus hit, the vehicle he was in whizzed perilously close to a row of tightly spaced sycamore trees at more than 70 miles per hour.

Otte says that his death-defying adventures are over now that he’s focusing on the book he hopes to finish in the next couple of years. Something in his eager blue eyes however, seems to suggest that there’s no stopping him.

A small selection of Otte's work is on display at the Academy of Natural Sciences new exhibit, Dual Nature: Science Illustrations of Dan Otte, which opened last Saturday and will be on display until December 4th.

Chasing Grasshoppers from thescientistllc on Vimeo. 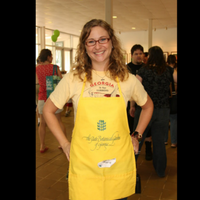 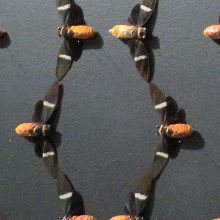 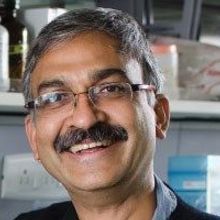