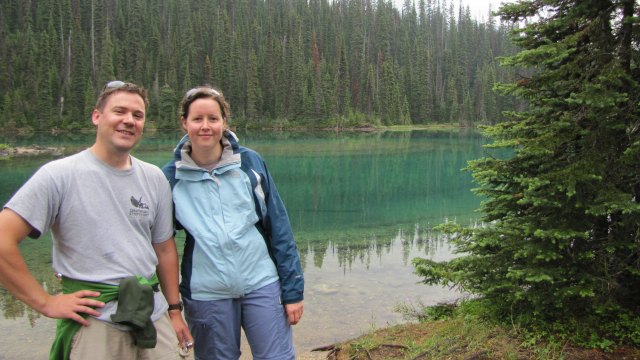 Caleb Brown proposed to Lorna O’Brien in the acknowledgements of a 2015 paper describing a horned dinosaur nicknamed Hellboy.COURTESY CALEB BROWNOn a starlit night in Arizona in 2014, Joanna Schug handed Kunio Sayanagi a research proposal. Schug, a behavioral scientist at the College of William and Mary, had been carrying the proposal around in her bag for more than a month, but she could never find the right time for the handoff. Sitting on the hood of a car under the dark desert sky, the moment felt right.

This was no ordinary collaboration agreement. The document proposed “a long-term research study to examine the impact of a marital union on future happiness over the course of the rest of our lifetimes.” Preliminary data, depicted in a graph, showed a steady increase in happiness since the scientists became a couple.

He nervously waited for her to reach the...

Sayanagi, a planetary scientist at Hampton University, enthusiastically agreed, and formally sealed the deal with a “letter of commitment” hidden inside a Valentine’s Day bouquet a few of months later. The pair then coauthored a research paper titled “The effects of an encounter of Joanna and Kunio: A wedding celebration.”

The manuscript, alas, only appeared in the couple’s wedding program, an obscure publication that is not peer reviewed. Plenty of other scientists, however, have managed to sneak romantic gestures into more prestigious publications. Thanking a
significant other in the acknowledgements section of a scientific paper, for instance, is common. Proposing marriage? Not as much. 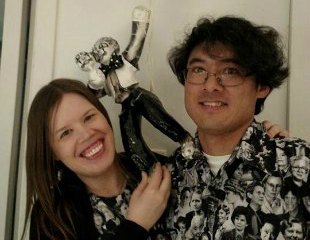 Joanna Schug and Kunio SayanagiCOURTEST JOANNA SCHUGCaleb Brown, a paleobiologist at the Royal Tyrrell Museum in Alberta, Canada, is one of at least three scientists, as far as we could find, to have proposed in a scientific paper. He popped the question to his girlfriend, Lorna O’Brien, in a 2015 article outlining the discovery of a new horned dinosaur nicknamed “Hellboy.” A few days before the paper was published, he asked O’Brien, also a paleobiologist at the Royal Tyrrell Museum, to scan the page proofs for mistakes. He nervously waited for her to reach the acknowledgements, where he’d written, “Lorna, will you marry me?” But she skipped right over it. He had to ask her to read it again.

“When you do a taxonomic description of a new species, it tends to have an immortality in the literature,” Brown tells The Scientist. By hitching the question to the discovery, he hoped to buy some immortality for the proposal, too. It helped, of course, that he was relatively sure what the answer would be. “I thought it was a cool, but geeky and fun way to propose,” he says.

On her second read, O’Brien read the proposal, and accepted. “I’m not really a big gestures kind of person,” says O’Brien, but “having it attached to such an iconic specimen is nice.”

Marriage proposals in the literature are sparse, but there is a long tradition of naming newly discovered species after the ones you love. In the Aloe genus, for example, at least 1 percent of species take their names from botanists’ wives, according to a 2010 analysis in Bradleya. (No husbands have yet earned that honor.) 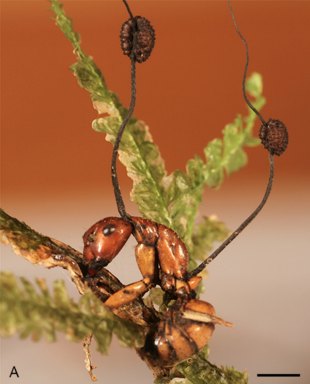 An ant with fruiting bodies of the fungus Ophiocordyceps albacongiuae emerging from its body.J.P.M. ARAUJO ET AL., STUDIES IN MYCOLOGY, 90:119-60, 2018.A move riskier than commemorating one’s own wife is to name a species after someone else’s. Carl Linnaeus, the father of taxonomy, named a genus of South African plants with pretty, five-petal flowers Monsonia, after Lady Anne Monson, a fellow botanist and wife of Colonel George Monson. A draft letter to Lady Anne found among his papers asks for one favor, “the procreation of just one little daughter to bear witness of our love—a little Monsonia, through which your fame would live forever in the Kingdom of Flora.” According to the book The Naming of the Shrew, it’s not clear whether Linnaeus had the nerve to send the letter.

Having a flower bear your name is clearly an honor. But what about a parasitic fungus capable of turning ants into zombies? Entomologist David Hughes named one, Ophiocordyceps albacongiuae, after his wife. Or what about a slime-mold beetle? In 2005, Quentin Wheeler, an entomologist and now president of SUNY College of Environmental Science and Forestry, and a colleague were tasked with naming 65 new species of these tiny bugs. Wheeler and his coauthor each named one for their wives, Agathidium marae and Agathidium amae. Wheeler also named one, Agathidium kimberlae, for his ex-wife. (He had promised to name a species after her when they were together, and “felt honor-bound to make good on that promise,” he tells The Scientist.)

While some might take offense at being commemorated in this way, “it was very much an act of love,” Wheeler says, “love for my wives, but love also for these incredible animals and their fascinating evolution.” Slime-mold beetles are tenacious fighters, quick to mature, and outstanding at sniffing out slime mold even at great distances. What’s more, he adds, “they are kind of adorable.”