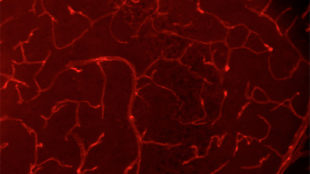 Blood vessels in the brain.COURTESY OF WILLIAM SONNTAG

Whole brain radiation therapy, which is used to destroy metastatic or hard-to-reach brain tumors, comes with a cost: brain tissue damage and the loss of some cognitive abilities. But publishing today (January 18) in PLoS ONE, researchers found that, after irradiating the healthy brain tissue of mice, reducing the amount of oxygen in their environment helped them regain the ability to perform spatial reasoning tasks.

“I believe this paper provides a first important step” in understanding how radiation affects the brain, neuroscientist Gabriel Haddad from the University of California, San Diego, who was not involved in the research, wrote in an email to The Scientist. “But we will need to really know how hypoxia is rescuing the phenotype before this could be at all translational,” he added.

Around 40-50 percent of survivors of whole brain radiation therapy have permanent loss...

Last year, the group published a paper showing that radiation does, in fact, reduce vasculature density. In the new research, they aimed to see if it is also linked to cognitive decline. They gave mice a course of radiation over four weeks, and then ran them through a battery of behavioral and cognitive tests at various time points in the following months. And, as expected, mice that underwent brain radiation treatment had impaired spatial learning and memory.

The researchers also hypothesized that hypoxic, or low-oxygen, treatment would alleviate or prevent the loss of cognitive ability. When in a hypoxic chamber, “tissues of the body sense that there is not enough oxygen around and grow more vessels to get more oxygen to the tissues,” said Sonntag. “So we capitalized on that… and when we put the animals in a hypoxic chamber, there was complete recovery of the blood vessels.”

Furthermore, they saw the same effect with cognitive ability: spending a few weeks in a low-oxygen chamber following radiation treatment revived the animals’ learning and memory.

The cause and effect of the results are still unknown, however, said Haddad. “It is not clear that the increase in angiogenesis is responsible for the improvement in cognition… Hypoxia is a very complex stimulus.”

Additionally, even if the basic theory holds up, putting these findings into practice in humans would be complicated, said neuro-oncologist Jorg Dietrich of the Massachusetts General Hospital Cancer Center, who was not involved in the research. Tumors themselves can become hypoxic, consuming the oxygen in their immediate vicinity, and hypoxic tumors are known to be more resistant to radiation therapy.

“We already know that hypoxia or oxygen content has a huge influence on how radiation works,” Dietrich said. “They need to demonstrate that the goal of radiation is still preserved: we want to treat the bad guys while preserving the good cells.”