Luc Montagnier, a French virologist who won the Nobel Prize for codiscovering human immunodeficiency virus, died Tuesday (February 8) at the age of 89.

FranceSoir reports that he died “surrounded by his children,” at a hospital in Neuilly-sur-Seine, a suburb of Paris.

For decades, Montagnier received widespread acclaim for his work on the virus that causes AIDS. In recent years, however, he had alienated many of his colleagues by promoting fringe scientific theories and what they called “pseudoscience,” reports The Washington Post. Most recently, he had become a fierce opponent of coronavirus vaccines, and, in 2020, stirred controversy by promoting the theory that SARS-CoV-2 was created in a lab, according to the Associated Press. 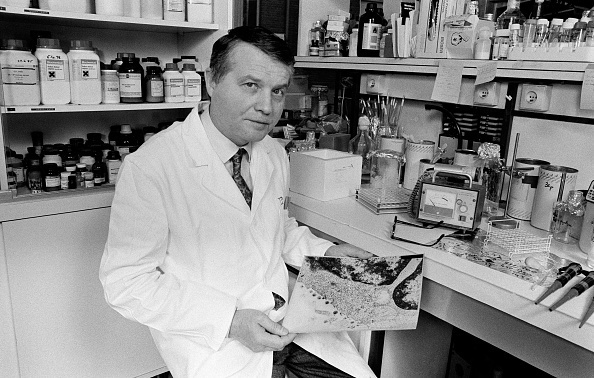 Montagnier was the director of the Viral Oncology Unit at the Pasteur Institute in the 1980s, as the AIDS epidemic was raging in France. At the time, AIDS had no known causes or effective treatments and was becoming a public health crisis. Healthy, young patients—who were predominantly gay men—were falling frighteningly sick. Their immune systems would become compromised, and they would contract rare forms of cancer and pneumonia.

Many doctors suspected that a retrovirus—a kind of virus that inserts its DNA into the host—could be the cause, reports The New York Times. In 1983, Montagnier, an expert in retroviruses, and his colleague Françoise Barré-Sinoussi received a sample from a lymph node of a patient with early signs of the disease. According to the Post, Montagnier and his colleagues detected viral activity in the tissue and isolated what they dubbed lymphadenopathy associated virus (LAV). They reported this work in the May 20, 1983 issue of Science. But at the time, the article didn’t receive much attention, reports the Post.

A year later, an American researcher, Robert Gallo, published four articles confirming the link between HIV and AIDS. For years later, the two researchers feuded about who had discovered the virus and when.

Within years, however, the work led by Montagnier, Barré-Sinoussi, and Gallo led to an HIV blood test and treatments for AIDS. Montagnier sued Gallo in 1985 for patenting the test in the US, reports the Times. According to The Los Angeles Times, in 1987, US President Ronald Reagan and Prime Minister Jacques Chirac of France stepped in, signing an agreement to share patent royalties for the test and proclaiming that both scientists had helped discover the virus.

Montagnier and Barré-Sinoussi were honored with the Nobel Prize in Physiology or Medicine in 2008 for the virus’s discovery, sharing it with Harald zur Hausen, a German virologist who discovered that human papillomaviruses cause cancer.

The Nobel Committee said it had no doubt “as to who had made the fundamental discoveries” concerning HIV, reports the New York Times. “Never before has science and medicine been so quick to discover, identify the origin and provide treatment for a new disease entity,” the committee added. “Successful antiretroviral therapy results in life expectancies for persons with HIV infection now reaching levels similar to those of uninfected people.”

At the time that Nobel Prize was awarded to Montagnier and Barré-Sinoussi, more than 25 million people had died of AIDS, while 33 million were living with HIV worldwide, according to the New York Times.

In the early 2000s, Montagnier began expressing views that led to him being “shunned by much of the international science community,” The Wall Street Journal reports. Around this time, according to the New York Times, he began performing unconventional experiments. One of his studies, published in a journal he founded, claimed that DNA emitted electromagnetic radiation and suggested that some bacterial DNA continues to emit signals after an infection had been cleared. Just last year, he claimed that COVID-19 vaccines led to the evolution of coronavirus variants, according to the Journal.

Montagnier was born on August 8, 1932 in Chabris, France, and was the only child of Antoine and Marianne (Rousselet) Montagnier, reports the New York Times. He earned his bachelor’s degree at the University of Poitiers, according to the Post, and his doctorate at the Sorbonne. He worked at the Virus Unit of the Medical Research Council in London from 1960 to 1963. Montagnier returned to Paris in 1965, reports the New York Times, and seven years later founded and directed the Viral Oncology Unit at the Pasteur Institute.

Montagnier is survived by his wife, Dorothea Ackerman, his two daughters, Anne-Marie and Francine, and his son Jean-Luc.