Long believed to be simple, pathogen-eating immune cells, macrophages have a far more extensive list of job duties. They appear to have specialized functions across body tissues, help repair damaged tissue, play a key role in regulating inflammation and pain, and participate in other roles scientists are just beginning to reveal.

Now, a group of researchers in the Netherlands has identified a mechanism by which macrophages may help resolve inflammatory pain in mice. In a study recently posted as a preprint to bioRxiv, they report that the immune cells shuttle mitochondria to sensory neurons that innervate inflamed tissue, and that this helps resolve pain. The researchers speculate that the mechanism could replenish functional mitochondria in neurons during chronic inflammatory conditions, which is associated with dysfunctional mitochondria.

“I think the transfer of mitochondria is quite convincing,” Jan Van den Bossche, an immunologist at Amsterdam University Medical Center who wasn’t involved in the research, writes to The Scientist in an email. If the findings can be replicated, “this could have [implications for] many diseases with chronic inflammation and pain,” he adds.

The research is the result of a five-year project that began when Niels Eijkelkamp, a neuroimmunologist at the University Medical Center Utrecht, and his colleagues started investigating how inflammatory pain resolves, “so we could understand what causes chronic pain,” he says.

Macrophages are just another [cell type] to add to the list of cells that can actually do this transfer of mitochondria to improve cell function, especially damaged cell function.

To induce inflammatory pain in mice, the researchers injected the substance carrageenan into several animals’ hind paws, a treatment that typically resolves within three or four days. Their analysis of the tissue in the inflamed paws revealed a high number of macrophages surrounding the sensory neurons there, while the concentrations of other immune cells such as B cells or T cells didn’t change much throughout the course of inflammation.

Further experiments suggested that the macrophages were helping resolve the pain associated with the inflammation. In mice where monocytes—the cells that differentiate into macrophages once they infiltrate body tissues from circulation—and macrophages themselves were artificially depleted, the animals experienced chronic pain.

The researchers hypothesized that it might have something to do with mitochondria. Some of the group’s previous research indicated that neuronal mitochondria are functionally impaired in mice with persistent inflammatory pain. Along with other research, this supports the idea that mitochondrial dysfunction could somehow cause a systemic failure to resolve pain. Perhaps macrophages could be replenishing functional mitochondria in stressed neurons, the team speculated.

Macrophages were apparently releasing the mitochondria as packages contained in extracellular vesicles. After combining forces with an immunology group at the same institution led by Linde Meyaard and Michiel van der Vlist, the team investigated how the mitochondrial transfer exactly occurs. A series of experiments identified a receptor called CD200R produced by the mitochondria-containing vesicles. They speculate that this receptor allows the vesicles to dock onto sensory neurons, which express a ligand that matches that receptor.

Inflammation can cause neurons to perpetually fire action potentials, an energy-demanding process that could wear out their mitochondria. “They need help from outside, in this case macrophages,” Eijkelkamp explains.

It’s well documented that macrophages are involved in regulating pain, notes Heather Wilson, an immunologist at the University of Aberdeen who wasn’t involved in the study. There’s evidence that macrophages can both induce and resolve inflammation by communicating with sensory neurons through the release of certain cytokines, she explains. That they can do so by releasing mitochondria, however, is new. “It is surprising that the transfer of mitochondria has such an effect on pain,” she writes in an email, adding that the mechanism could have relevance for different settings of pain, from inflammatory disease to spinal or tissue injury.

Van den Bossche notes that the subgroup of macrophages that counteract inflammation—known as M2 macrophages—were known to have high numbers of mitochondria. The new study reveals how macrophages “can somehow also transfer some metabolic fitness to their neighbors,” he explains in an email.

Cells such as astrocytes in mice have been observed to send mitochondria to damaged neurons following stroke. “[Macrophages] are just another [cell type] to add to the list of cells that can actually do this transfer of mitochondria to improve cell function, especially damaged cell function,” Wilson says.

Wilson would like to see more studies on the precise molecular mechanism involved in transferring the mitochondria. “Is it purely through the CD200 [mechanism] or are there other ways as well?” she asks. She’s also curious whether this mechanism is specific to macrophages or if other immune cells could be doing something similar, and if human macrophages in culture would do the same for damaged neurons.

Eijkelkamp is well aware of these gaps, and hopes to address many of them in future research. “These are important questions that we still need to answer.” 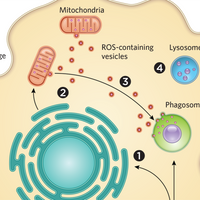