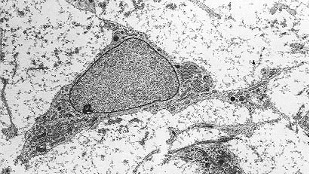 WIKIMEDIA, ROBERT M. HUNTStem cell therapy is often hailed as the treatment of the future for several diseases. And mesenchymal stem cells (MSCs)—which can be derived from both embryonic cells and adult cell sources, such as bone marrow, blood, and adipose tissue—have shown particular promise. MSCs are now being tested in more than 350 clinical trials.

What makes MSCs special is that they do not express certain cellular markers and thereby manage to evade the immune system. This means they can be administered therapeutically without suppressing the patient’s immune system—a necessity with most grafts and organ transplants. Further, MSCs seem to move toward damaged tissue and assist in repair by both differentiating into key cells themselves, and by recruiting other repair factors to the site. But making MSCs of consistent quality and sufficient quantity to treat patients has been tricky.

A team led by Robert Lanza from Advanced...

The researchers started with hESCs and differentiated them into embryoid bodies for four days, after which they transferred cells to a specialized growth medium. Within three or four days, spherical hemangioblast cells emerged, which Lanza's team expanded to give rise to MSCs. Expanding hemangioblasts has long been fraught with technical difficulties.

“To date, even in mice, scientists have not managed to obtain an expandable population of hemangioblasts,” Lanza told The Scientist.

The team compared the resulting cells with the most common MSCs, those derived from adult bone marrow. Pitting bone-marrow derived MSCs from two different donors against the hemangioblast-derived MSCs, the researchers found that the latter group divided at double the rate.

“If we assume one unit of adult bone-marrow MSCs represents one [Boston] Red Sox fan, then one unit of hESC-MSC could generate enough MSCs to fill all of Fenway Park," Lanza explained.

The team also showed that its hemangioblast-derived MSCs could influence cells from both the innate and adaptive immune systems.

“[This] report provides an alternative to the limitations on MSC expansion that have presented such a challenge to the field,” said Daniel Peterson, who directs the Centre for Stem Cell and Regenerative Medicine at Rosalind Franklin University’s Chicago Medical School and was not involved in the study.

Lanza and his colleagues also tested their MSCs in vivo, applying them to mouse models of the autoimmune diseases lupus nephritis and uveitis. The researchers injected 10 mutant mice, which developed lupus nephritis at 24 weeks of age, with hemangioblast-derived MSCs and found that their lifespans significantly increased as compared to untreated mice. Similarly, the team induced a mild form of the eye disorder uveitis in mice by immunizing them with peptides from a retinal protein and then charted disease progress in untreated mice as well as animals administered hemangioblast-derived MSCs. Both treatment regimens appeared to help the animals fare better.

“Since chronic inflammation is known to cause numerous human diseases, it will be of great interest to test the therapeutic effects of this unlimited and safe cell source in other disease models such as Alzheimer's disease and rheumatoid arthritis,” Kwang-Soo Kim, a professor of psychiatry and neuroscience at McClean Hosptial in Belmont, Massachusetts, who was not involved in the work, told The Scientist in an e-mail.

“The report . . . provides an alternative to the laborious and expensive clinical practice of harvesting a patient’s own bone marrow to isolate their MSCs for therapeutic use,” added Peterson.

In their paper, the authors proposed that further studies on this new line of stem cells—including on other animal models and diseases—could pave the route toward clinical application.