ABOVE: A school of sulfur mollies (Poecilia sulphuraria) JULIANE LUKAS

Animal collective behavior reveals itself in often-mesmerizing visual displays of swarming insects, flocks of birds in flight, and schools of fish pulsating underwater as a single unit. Now, researchers report they’ve found a possible reason for a peculiar display of collective behavior from fish shoals in sulfur springs in Mexico: deterring predators. The results appeared yesterday (December 22) in Current Biology.

Study author and Leibniz Institute of Freshwater Ecology and Inland Fisheries behavioral ecologist Juliane Lukas explains to The Scientist that sulfur mollies (Poecilia sulphuraria) gather in large shoals at the surface of the low-oxygen springs to avoid hypoxia. There, they’re ripe for the picking by predators such as kingfishers, kiskadees, and other birds. When presented with a threatening stimulus, these “carpets of fish,” as Lukas describes them, repeatedly disturb the water in a wave-like fashion by diving down for a few seconds, triggering their neighbors to mimic their diving behavior. Lukas and her colleagues decided to investigate why.

The team created attractive hunting perches near fish schools from which predatory birds could watch and attack the fish shoals. Between April 2017 and 2018, the researchers videoed more than 940 attacks by birds on the shoals. Coauthor Jens Krause, a behavioral ecologist also from the Leibniz Institute, writes in an email to The Scientist that “we needed to track the behaviour of the fish to measure the speed and size of the fish waves. This required sophisticated machine-learning algorithms.” The scientists also measured the number of waves produced in response to an attack, as well as the waiting time between attacks from the same bird. Finally, they tracked attack success—whether or not the bird indeed captured a fish.

“In the beginning, it was really just documenting what was actually happening. Which predators are there triggering waves? When do we see this? What sort of fluctuations are in the system and dynamics?” says Lukas, who recalls being surrounded by the smell of rotten eggs every morning when arriving at the sulfur springs. “But to really pinpoint that [the mollies’ wave-making behavior] was not just correlated with the predators, but actually caused by their presence, we really needed an experiment.”

In a second phase of research, the team focused on the effect of the wave behavior on one predator, the kiskadee (Pitangus sulphuratus). They chose this bird because it hunts in “little swinging attacks where they don’t actually hit the water,” explains Lukas, and thus doesn’t typically induce wave behavior in the fish. This enabled the researchers to observe its behavior both when molly waves were experimentally present and absent. “In our system, we could really disentangle the waves from the actual predator, and really show what happens without and with the waves,” she says. They also compared the kiskadees’ behavior with that of the kingfisher (Chloroceryle americana), as recorded during the first phase of field observations.

After the researchers ensured a kiskadee bird was present on a hunting perch by the sulfur spring, they waited for one bird attack to take place, then experimentally induced waves in the sulfur mollies by using a sling shot to propel a small round object such as a pea or an M&M into the shoal to mimic a subsequent attack. They also performed control shots into the water away from the shoal that created no waves by the mollies.

The researchers’ video recordings showed that the experimental shots induced waves similar in number, size, and speed to the waves observed in initial field observations from attacks of kingfishers. After waves were produced, the average waiting time between attacks for kiskadees and kingfishers doubled, suggesting the waves could prompt predators to delay their next attack. Furthermore, when the birds saw more experimentally induced waves being produced, their attack intervals increased and the probability of successfully catching a fish decreased when compared to control experiments where no waves were created. The kiskadees also increased how often they changed hunting perches when waves were more frequent. 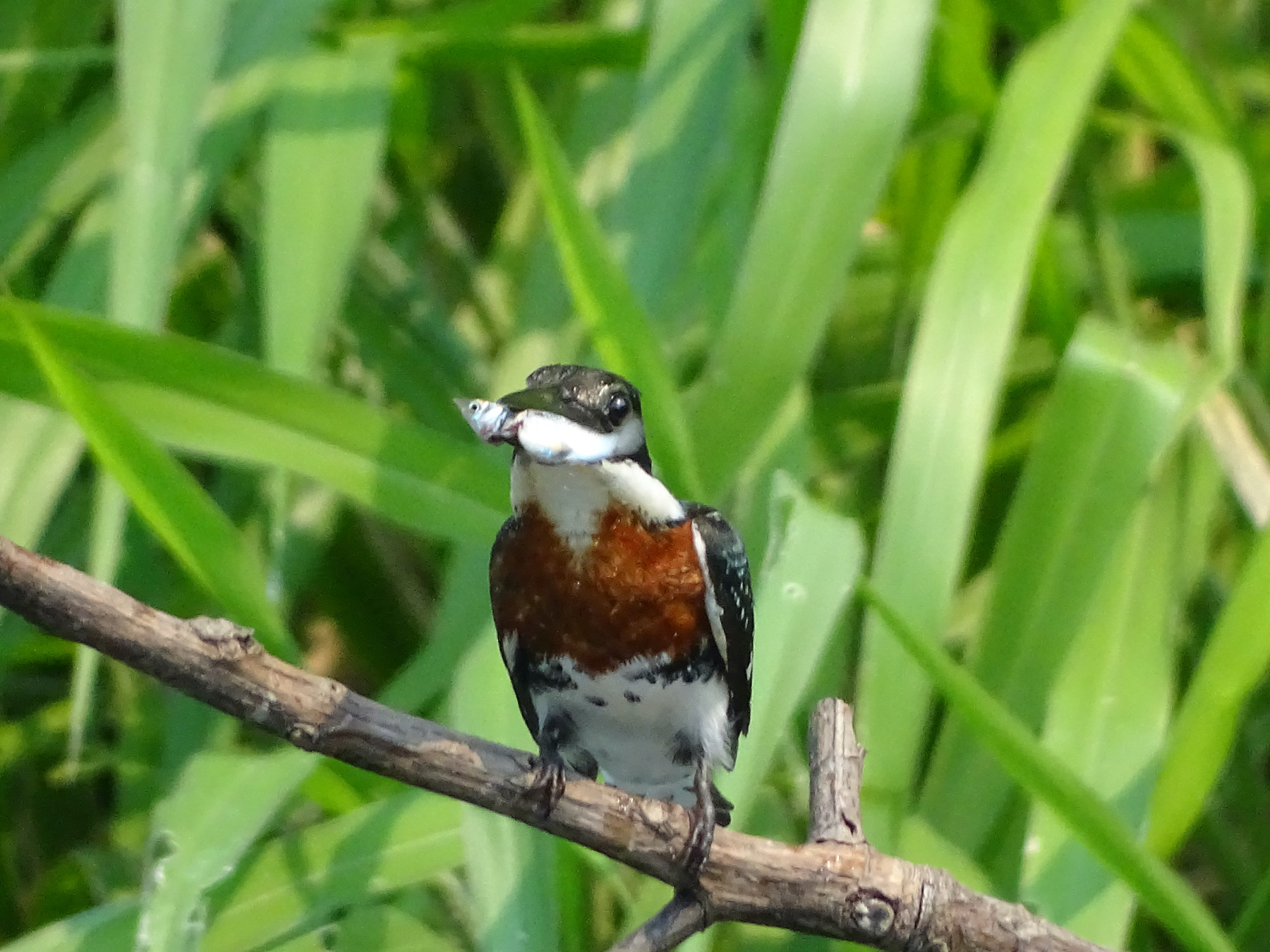 It’s not just fish that engage in wave-making—some flying animals, such as birds and bees, do it too. Guy Beauchamp, an independent animal behavioral researcher who has studied collective wave behavior in birds and who was not involved in the study, says the researchers’ experimental approach, including their measurements of wave frequency and waiting time between attacks, was strong. “What’s most impressive in [the study] is that not only could they measure these things properly, [but] they could initiate experimentally these waves by using the slingshot and seeing how it affected the predator behavior.”

Lukas tells The Scientist that while the team cannot confirm an adaptive purpose for this wave-making behavior, the researchers suspect the waves are more than a simple escape mechanism for the mollies. That’s because, as Krause writes, sulfur mollies can remain underwater for 30 to 40 seconds, but in the waves they only dive for about one-tenth that time. “If this was purely escape behavior, they would not voluntarily bring themselves back into reach of the predator by returning to the surface earlier than they need to.”

In addition to escape, another possibility, the authors write in the paper, is that the wave behavior acts as a signal to the predator that the fish have spotted them and thus won’t be caught easily. Krause posits that the purpose of the waves could be a combination of “escape, predator confusion, and signaling. Escape almost certainly evolved first and the others secondarily.” Lukas adds, however, that predator confusion as a cause would be very difficult to assess.

James Herbert Read, a University of Cambridge behavioral ecologist who was not affiliated with the study, writes in an email to The Scientist that “Many patterns exist in the natural world, such as the ripples of sand dunes and chemical spirals that clearly do not have any adaptive function,” and that the adaptive function of this particular collective behavior in fish had previously remained untested. However, he writes, the research team has successfully demonstrated that the waves serve an adaptive anti-predator function.

Beauchamp also notes two areas in the research that could be explored further: examining the effects of different predators and different conditions and looking more deeply into prey behavior—including whether individual fish could benefit from collective waves without participating in them themselves, a possibility Krause also raises. “There was a lot of variation in the waving behavior,” Beauchamp writes. “And we know from their results that there was a lot of variation in the density of the fish at the surface. It would have been nice to see if changes in these traits in the prey would have affected the predator success.”

Lukas says she plans to investigate some of these points, including whether “mollies might react differently to different predators.” She also wants to examine how information progresses through the shoal by looking into sulfur molly behavior on an individual level while producing the waves, which might include tracking individual fish and looking at their speed, how they interact with each other, their shoal densities, and the distances between individuals.

The groups’ results could also be relevant to other animals such as birds and bees that participate in collective wave-making behavior, Lukas notes. “Whatever we learn here, we can then also go back to other systems and try to see if we find the same evidence. It is really just the starting point.”

Correction (December 27): A previous version of this article mistakenly represented James Herbert Read’s comments as skeptical that the study had shown an adaptive function for the mollies’ surface waves; in fact, Read had written that the study did demonstrate such a function. The Scientist regrets the error.