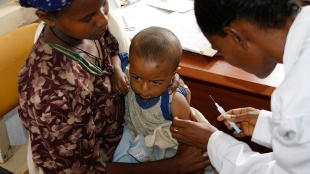 An experimental vaccine reduced the risk of developing malaria by about 50 percent in 6,000 sub-Saharan African children when combined with existing interventions, such as the use of insecticide-treated bed nets, according to a new study published online today by the New England Journal of Medicine.

Officials and researchers collaborating on the project announced preliminary results from the Phase III clinical trial of the RTS,S malaria vaccine today (18 October) at a malaria meeting in Seattle. "We're on track to make history with this vaccine trial," Christopher Elias, president and CEO of the Seattle-based nonprofit PATH organization, which collaborated in the trial, said during the news conference.

Doctors at 11 sites spread across seven African nations administered three successive doses of the RTS,S vaccine to 6,000 children, aged 5-17 months. Monitoring the patients for up...

The RTS,S vaccine, created in the late 1980s by researchers in pharmaceutical giant GSK's Biologicals division, uses a protein from an existing hepatitis B vaccine to fuse a surface protein, called circumsporozoite, from the malaria parasite that helps it invade human liver cells, where it matures, reproduces, and launches its attack on the body's red blood cells. GSK's proprietary adjuvant mixture strengthens the immune response provoked by the vaccine. Partners in the trial, which began in 2009, include the PATH Malaria Vaccine Initiative, the Bill and Melinda Gates Foundation, the Walter Reed Army Institute of Research, and several African research centers.

The RTS,S vaccine trial continues in Africa, with results in the crucial 6-12-week-old infant age group expected by the end of 2012, and long-term efficacy data for all of the study's 15,460 participants expected by the end of 2014. According to GSK CEO Andrew Witty, the vaccine could garner approval by appropriate regulatory authorities and a recommendation from the World Health Organization by 2015.

Witty added that GSK would strive to make the vaccine as affordable as possible, contributing an estimated $50-100 on top of the $300 million already spent on the project to make the RTS,S vaccine, which does require refrigeration in transit, available to African children on a wide scale. “These data bring us to the cusp of having the world’s first malaria vaccine, which has the potential to significantly improve the outlook for children living in malaria endemic regions across Africa," he said during today's conference.