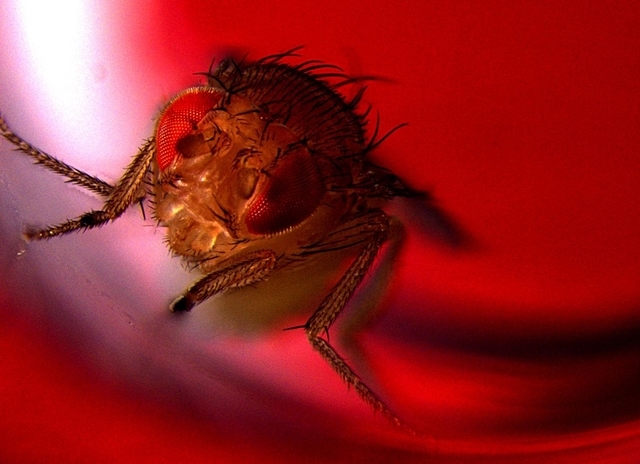 Male fruit flies enjoy ejaculating, according to research published yesterday (April 20) in Current Biology. The study also found that when fruit flies are denied sex, they consume more alcohol than usual. It is the first study to demonstrate that insects find sex pleasurable.

“We wanted to know which part of the mating process entails the rewarding value for flies,” says Galit Shohat-Ophir, a neurobiologist at Bar-Ilan University in Israel, in a statement. “The actions that males perform during courtship? A female’s pheromones? The last step of mating which is sperm and seminal fluid release?”

To test if the latter is pleasurable, Shohat-Ophi and her colleagues used genetically engineered male fruit flies whose neurons controlling ejaculation can be activated by red light. These flies spent...

David Anderson, a neurobiologist at Caltech who was not part of the study, tells National Geographic that it’s possible the pleasure the flies experienced wasn’t from ejaculation, but other reward systems in the brain that the stimulated neurons act upon.

Next, the researchers plied the flies with alcoholic and nonalcoholic drinks and observed their response. The flies that had ejaculated preferred nonalcoholic drinks, while those that had not been exposed to the red light chose the alcoholic ones. “Male flies that are sexually deprived have increased motivation to consume alcohol as an alternative reward,” says Shohat-Ophi in the statement.