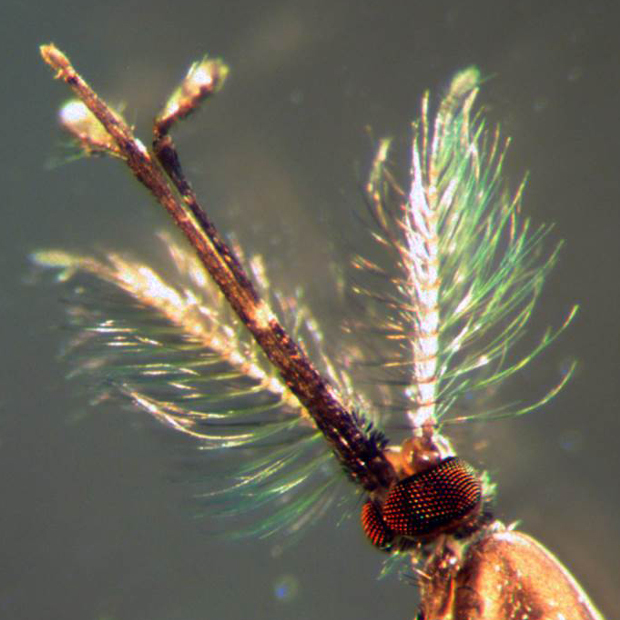 Male Anopheles gambiaeANT, SINKINSResearchers have identified a gene that kickstarts the male-specific genetic program in the African malaria mosquito Anopheles gambiae. When expressed in genetically female mosquito embryos, the gene, called Yob, is lethal. The results, published today (June 30) in Science, highlight a way toward genetic approaches to propagate male-only mosquitoes that could help kill malaria parasite–carrying females in the wild.

“This is a breakthrough in the field and potentially very useful for control of the malaria-transmitting mosquito,” said Steven Sinkins, who studies mosquito-borne diseases at Lancaster University in the U.K. “There is also an interesting evolutionary story that could be revealed as a result of this work,” added Sinkins, who penned an accompanying editorial but was not involved in the work.

“This is an important step forward in understanding the biology of this malaria vector and also has potential for applications to control malaria,”...

Insect species employ a variety of different genetic mechanisms to confer either the female or male sex. While the downstream components are evolutionarily well conserved, the initiating gene that instructs male-specific development of the embryo has been elusive in most species. Among the insects with a Y chromosome, only the maleness gene of A. aegypti had previously been determined.

To try to find the maleness gene in A. gambiae, Jaroslaw Krzywinski of the Pirbright Institute in the U.K. and colleagues isolated the minute amount of messenger RNA (mRNA) in early male and female mosquito embryos and performed transcriptome analyses to identify those transcripts found in male—but not female—embryos. The researchers found transcripts that mapped to the Yob gene on the Y chromosome, which overlapped with a previously described YG2 gene, a candidate male-determining gene.

Krzywinski’s team indeed found that this gene had the characteristics of a male-determining gene: the transcripts were present from two hours after eggs were laid and continued for the duration of a mosquito’s life. Yob also controlled the synthesis of male-specific gene products in the sex determination pathway, the researchers found.

“There are very small time windows [mosquito embryo development] and very small amounts of RNA involved,” noted Sinkins. “Which makes this a technical tour de force, to be able to sex early embryos and to separate their mRNA pools and make the comparison that allows gene identification. It’s very impressive work.”

When the researchers injected Yob mRNA into early-stage embryos along with a green fluorescent protein (GFP) marker, the surviving mosquitos were all fertile males. A group of control embryos injected with just the GFP marker developed into an equal distribution of males and females. This demonstrated that the delivery of the mRNA was lethal to the developing female embryos.

Researchers have long sought to use genetic methods to control malaria vectors, but “we needed a large-scale method to segregate males from females and release only males which increases the efficiency of such control approaches and is a strict prerequisite when targeting pathogen-transmitting mosquitoes,” Krzywinski explained. “We now have a fantastic tool to make male-only transgenic strains of major African vectors of malaria.”

Krzywinski and colleagues are now working to develop strains that could conditionally kill only female mosquito embryos. (Female mosquitos bite and transmit the malaria-causing Plasmodium parasite.)

“I hope in less than 10 years, we have genetic methods effectively controlling Anopheles mosquitoes,” Krzywinski told The Scientist.

One approach, according to Sinkins, is to conditionally express Yob from an autosome, creating, then releasing, male-only populations. “But a system that could spread itself, requiring only seeding releases would be much more effective,” said Sinkins.

Tu is a proponent of so-called gene drive to increase the ratio of male to female mosquitos. However, he said, “we need to see whether there is near 100 percent penetrance of the transgene.”

Another factor to consider, according to Tu, is whether the transgenic insects will be as competitive as their wild counterparts.