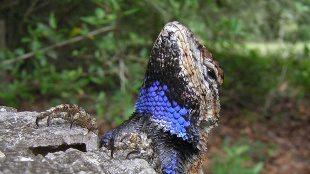 Yet many females also don blue ornamentations like the males, though they are less bright. These so-called “bearded ladies”—masculinized females—suffer reproductive consequences as a result of their markings. According to a study published in Biology Letters today (November 6), females with blue badges appear less attractive to males and reproduce later in the mating season than their unmarked counterparts.

Intrigued that females vary in ornamentation, Pennsylvania State University’s Lindsey Swierk and Tracy Langkilde sought to evaluate the effects of such traits on females. They collected female S. undulatus lizards from the field and...

Male S. undulatus may be less keen on ornamented females because they mistake them for males. Indeed, a 1987 Animal Behaviour study found that males treated blue-painted females as though they were males, reacting aggressively.

It is also possible that males dislike ornamented females because blue badges indicate a potentially negative quality in females. Although both sexes may develop similar ornaments because they share the genes that underlie the phenotype, expressing the ornament can be beneficial in one sex but detrimental in another.

“One solution is to have the expression of [ornamentation] regulated by other factors that are already different between sexes,” the University of Virginia’s Robert Cox explained in an e-mail to The Scientist. One such factor is testosterone, a vertebrate steroid hormone produced by the gonads, which males typically produce more of. Cox, who studies fence lizards but was not a part of this work, has previously shown that testosterone is critical in the expression of blue badges.

But while testosterone promotes reproductive success in males, it also weakens the immune system and increases mortality. Henry John-Alder from Rutgers University, who studies testosterone in fence lizards, noted that “much less is known about direct effects of testosterone on fecundity in females.”

Despite the reported negative reproductive effects of blue badges for S. undulatus females, ornamentation is found on more than half of them—an observation described by John-Alder as “very difficult to interpret.”

One possible explanation, suggested by Swierk and Langkilde, is that their study represents a snapshot from a long, ongoing process by which the species is slowly evolving to express blue badges in males only.

But other scientists are not sold on the “snapshot” explanation. “We need to know the fitness costs of ornamentation, if any, before drawing conclusions about evolutionary transitions,” John-Alder wrote. First he’d like additional evidence for “the causation and persistence of ornamentation in females” as well as “unambiguous information on fitness consequences of female ornamentation,” he continued. Because both sexes produce testosterone, added Cox, “regulation by testosterone is not a perfect mechanism for complete sex-limitation [of blue badge expression].”

It could also be that ornamented females are common because of some as yet undiscovered advantages of the trait that counteract the costs. For example, ornamented females—with presumably higher testosterone levels—may be more aggressive, which could help them fend off predators, outcompete other females, and initiate more matings.