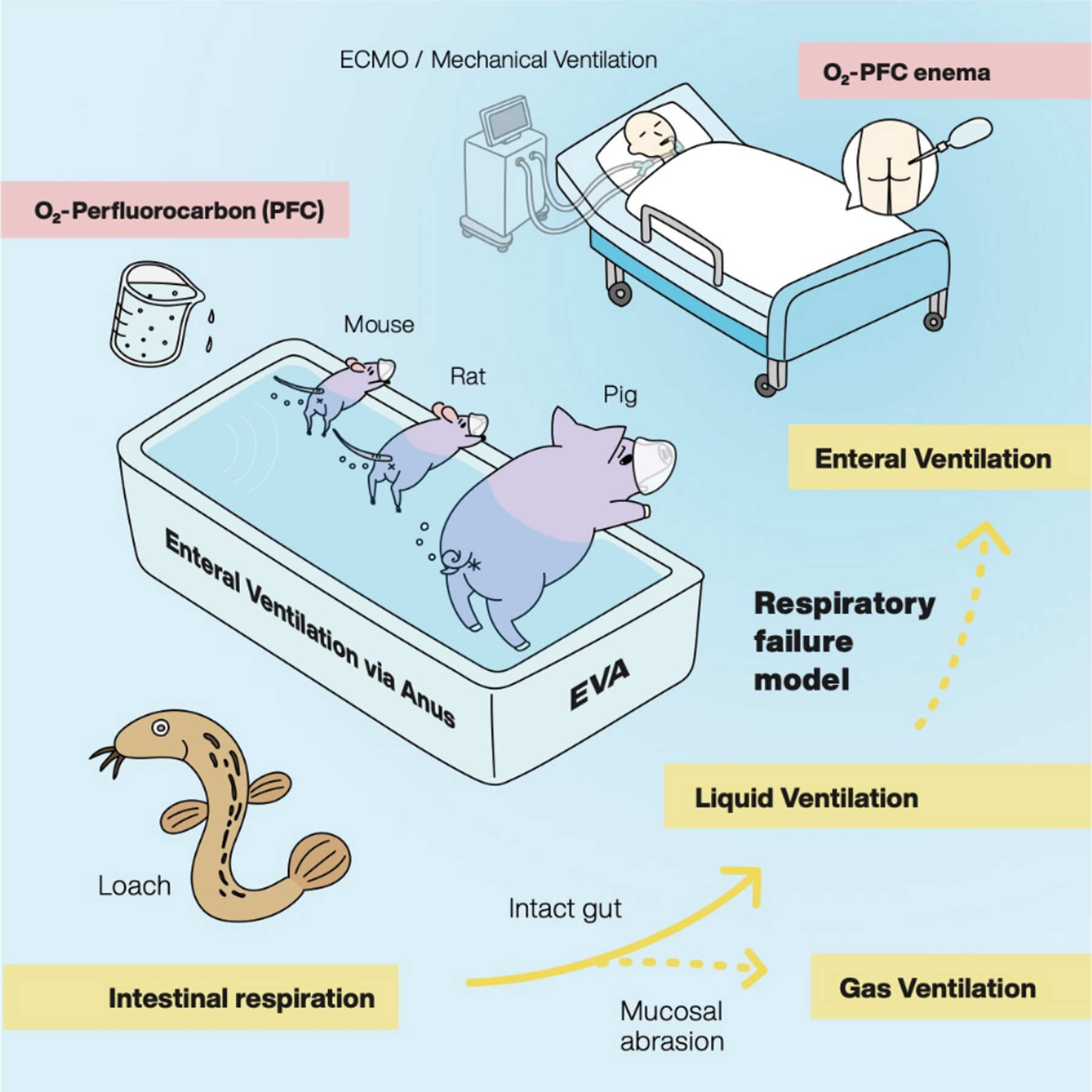 Mammalian preclinical models, including pigs and mice, are capable of intestinal breathing, which may offer an additional route of oxygen administration to patients who need respiratory support.
Asuka Kodaka, YCU

Ventilators—machines that force air into the lungs—can be lifesaving for patients who can’t breathe on their own due to injury or illness. But they can also cause lung damage because of the strong pressure they exert. Plus, ventilator numbers are limited, which has infamously created critical shortages during the COVID-19 pandemic.

In a study published today (May 14) in Med, researchers present an alternative oxygenation route: through the anus. They introduced oxygen in either gas or liquid form to the intestines of both mice and pigs that had experienced asphyxia or low-oxygen conditions and showed that the animals survived much longer than did those without the treatment.

“I’ve never read about or thought about ventilation using the enteral system,” says Divya Patel, a pulmonary and critical care physician at the University of Florida College of Medicine who did not participate in the work. “Mechanical ventilators are a bridge. They buy us time for the body to heal, [but] the problem with them is that they also cause injury to the lungs themselves,” she explains. These authors are “really being open-minded and thinking outside of the box.”

I’ve never read about or thought about ventilation using the enteral system.

Takanori Takebe, who is affiliated with Cincinnati Children’s Hospital, Tokyo Medical and Dental University, and Yokohama City University, typically focuses on manipulating stem cells to grow functional human organs in a petri dish. But three years ago, his father, who has a chronic lung condition, developed acute respiratory distress syndrome (ARDS)—a pulmonary complication that can be lethal and is common in patients with severe COVID-19—and needed to be ventilated. His father survived, but the experience impressed upon Takebe how limited the treatments for respiratory failure are.

“The standard of care is really damaging to native lung function,” he says. His father now has compromised lung function, which is not uncommon in patients who’ve been ventilated, particularly for an extended period of time. “I realized we need different ways of respiration support without engaging the native lung,” he adds.

Takebe and his team did some reading and learned that many organisms—including fish such as loaches, and arthropods—use organs including the skin and the intestines to acquire oxygen. To determine whether mammals have such abilities, they started with mice. Mice given hypoxic air through their tracheas survived for an average of 18 minutes when the researchers introduced oxygen gas into their intestines via their anus, but only about 11 minutes without. When the researchers abraded the intestinal lining with a brush and then introduced oxygen gas, most of the animals survived for at least 50 minutes.

“When you apply lethal hypoxic conditions in the mouse and supply oxygen enterally, the survival was doubled in terms of time,” he explains. “That will give us a lot more time to manage the condition to actually bridge until treatment is available.”

Next, the researchers tried a more feasible method than abrading the lining of the gut and pumping in gas: introducing an oxygenated liquid known as perfluorocarbon through the anus. In previous clinical studies, perfluorocarbons carrying dissolved oxygen have been administered directly into human eyes and blood vessels, as well as to the airways of premature infants to help reduce lung injuries. The researchers infused either oxygen-loaded perfluorocarbon or saline through the rectums of mice in a low-oxygen chamber. The animals that received the oxygenated liquid showed improvements in the oxygen pressure in their blood, and were more active after their perfluorocarbon infusion than were the mice that received saline.

Then the team tested the oxygenated liquid strategy in anesthetized pigs, which share more physiology with humans than mice do. They used a ventilator only five or six times per minute to induce nonlethal respiratory failure and then rescued the pigs from hypoxia with an enema-like administration of oxygen-loaded perfluorocarbon and observed no obvious side effects. To further test safety, they did infusions of perfluorocarbon into the intestines of rats. The rats were not dehydrated, did not experience diarrhea, and the levels of organ toxicity markers were the same or less than observed in the saline control.

The vascular network is labeled in purple in this image of a dissected mouse intestine. Takebe and colleagues hypothesize that the mammalian gut provides access to this network of blood vessels for potential gas exchange.
Yosuke Yoneyama and Akiko Kinebuchi, TMDU

These findings are “an example of evolution tinkering with some system that likely evolved for another purpose—that is, to digest food and to move nutrients around in the body—and then co-opting that system to do something else that’s really useful for the organism,” says Art Woods, a biologist at the University of Montana. He was not involved in the new study, but in a 2017 paper that inspired it, he showed with colleagues that sea spiders use their guts to transport oxygen. “It’s pretty clever to do this in some kind of interventional way, as a medical technique,” he adds.

Based on prior approval of perfluorocarbons by the US Food and Drug Administration for other indications, “we are very optimistic about the safety [and] tolerability in human applications,” Takebe says. He and his colleagues are forming a startup company to conduct further preclinical safety analyses and also evaluate more animal disease models. He says they hope to start clinical trials next year, but cautions that it’s not yet clear whether improving oxygenation via this method would be helpful in coronavirus patients. “COVID-19 is not just about ARDS or a lung oxygenation problem, but there are a number of different pathologies involved,” he explains.

“Understanding the mechanism would help to encourage people to adopt and do further research on it,” says Patel. Other next steps include investigating the strategy’s effectiveness in an ARDS or pneumonia type of model, as well as looking more into safety for this application of perfluorocarbons in people, she adds. If the technique proves effective and safe, it “potentially could be a way to avoid the mechanical ventilator or be able to set it to very low settings, so that you’re not causing that ventilator-induced lung injury.”