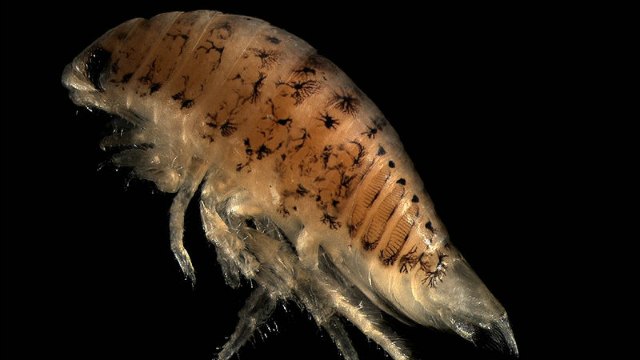 Researchers suggest mammals have a 12-hour clock with similarities to the clock driven by the tides in sea creatures such as the crustacean E. pulchra, shown. WIKIPEDIA, HANS HILLEWAERTAlong with their standard 24-hour circadian cycle, mammals may also harbor a distinct 12-hour clock, scientists report today (June 6) in Cell Metabolism.

Researchers led by Bert O’Malley of Baylor College of Medicine in Houston, Texas, identified a set of metabolism and stress genes in mouse liver cells that followed a pattern of expression on a 12-hour cycle—starting in the morning and again in the evening. O’Malley’s team also found that a 12-hour clock, distinct from the 24-hour circadian clock, drives this morning-evening rhythm in gene expression.

The clock’s origin, the scientists suggest, may be rooted in organisms’ initial evolution in the ocean millions of years ago.

In past studies, researchers have shown that coastal sea animals, such as the crustacean Eurydice pulchra have a dominant body clock driven by the 12-hour ebb and flow of the tides. Rhythms of gene expression every 12-hours have also been found in mammals, such as mice. Whether mammals’ 12-hour rhythms are driven by the body’s circadian clock or something else, however, has remained a mystery.

Interested in that question and also observations that the time of day can affect humans’ ability to think clearly, handle stress, and respond to medicine, O’Malley and colleagues began to look more closely at mammals’ 12-hour gene-expression rhythms. In the new study, they analyzed gene-expression data of 18,108 mouse liver genes. Using a mathematical technique developed by researchers at Rice University, the team identified 3,652 genes that had 12-hour rhythms that didn’t appear to be associated with the mouse’s circadian clock.

To determine whether the genes were, in fact, driven by a separate clock, the team looked at RNA sequencing data from wild-type and knock-out mice lacking the master circadian clock gene BMAL1. If the 12-hour clock was independent from the circadian clock, the team hypothesized, then the 12-hour rhythms should be more discernible in the gene expression of the knock-out mice. Of the 91 genes the team studied, 44 revealed perceptible 12-hour rhythms in the absence of BMAL1. Mice with a mutant form of the master circadian gene CLOCK showed similarly perceptible 12-hour rhythms.

Additional analysis revealed that the stress gene XBP1 helps to regulate the 12-hour clock in mice liver cells. This gene been tied to the circadian clock in previous studies. But, using their mathematical technique on single-cell time-lapse microscopy data, the researchers identified the 12-hour rhythm and argue it is, therefore, distinct from the circadian clock.

The Salk Institute’s Satchidananda Panda, who was not involved in the study, writes in an email to The Scientist that the observations are “interesting,” particularly the indication that a transcriptional mechanism similar to what is known for the 24-hour circadian rhythm may exist. “Hopefully, this observation will lead to the identification of additional regulators and mechanisms that drive this XBP1 mediated 12-hour rhythm,” he said.

After identifying the 12-hour clock, O’Malley’s team wanted to discern where it may have originated. The team looked at data on the crustacean E. pulchra, which has been shown to have a 12-hour clock tied to the tides, and also genes involved in feeding and stress in C. elegans. Comparing the rhythms in the crustacean, nematode, and mammal, the team argues that the 12-hour clock evolved separately from the circadian clock and could stem from organisms’ origin in the oceans.

O’Malley says the next step is to look at the physiological signals that drive the 12-hour clock and determine how they might relate to 12-hour gene expression cycles in humans.