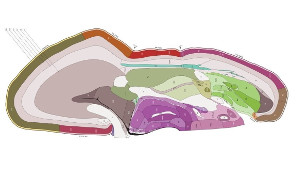 ALLEN INSTITUTE FOR BRAIN SCIENCEResearchers from the Allen Institute for Brain Science in Seattle, in collaboration with scientists nationwide, have created a brain-wide map of gene expression during prenatal development. The map could shed light on how human brains develop differently than the brains of mice or even other primates. The data should also allow researchers to link genes implicated in developmental disorders to their expression patterns during development, which could help explain the roots of disorders like autism. The work is described in a paper published today (April 2) in Nature.

“There is no doubt that this is a . . . resource that will be of use for many developmental scientists,” said Wieland Huttner, a cell biologist and neurobiologist at the Max Planck Institute of Molecular Cell Biology and Genetics in Dresden, Germany. Huttner was not involved in the work, but had previously mapped gene...

“For scientists interested in the topic, it’s a gold mine to just go through the data and select the genome [they’re] interested in,” and to see how genes of interest are expressed in the developing brain, said Pierre Vanderhaeghen, a developmental neurobiologist at the University of Brussels in Belgium, who also did not participate in the research.

The researchers examined tissues from four fetal brains preserved between 15 and 21 weeks following conception. “We picked this particular developmental stage because this is when you are really forming the neocortex,” said study coauthor Ed Lein from the Allen Institute. The neocortex is the outer layer of the brain and the site of higher-order cognitive processes such as reasoning, language, and memory.

To map fetal gene expression, Lein’s team cut the brains into thin slices. They dissected small populations of cells from the slices using lasers, isolated RNA from the dissected tissues, and then measured gene expression in each sample using microarrays. They also stained some brain slices to delineate the locations of brain structures and to better match gene expression to spatial coordinates. From each brain, the researchers isolated around 300 anatomical regions.

The resulting atlas has already yielded some interesting findings, said Lein. For instance, the researchers wondered whether genes that show atypical expression post-birth in those with autism might show clustered patterns of expression prenatally. So they searched the atlas to determine where these autism-related genes tended to be expressed, finding that they were enriched in newly generated excitatory cells of the developing cortex. Autism is associated with an atypical balance in excitatory and inhibitory signaling.

The researchers also began to explore how gene expression within the brain might differ between humans and other primates in early development. Lein and his colleagues analyzed where genes that differed between the species were expressed in the fetal brain and found that they were often expressed in the frontal cortex a region involved in memory, problem-solving, and other cognitive functions; in the subplate zone, a region that generates cortical neurons; and in certain inhibitory neurons.

The new data are available online as part of the Allen Brain Atlas. For each of the 300 regions the researchers analyzed, expression data for the tens of thousands of protein-coding genes in the human genome are now available, said Lein.

Vanderhaeghen compared the work to papers describing whole-genome sequences. He explained that studies involving vast sets of data sometimes take years to yield their best results. “It’s always difficult to know what will come out of it, just like genome sequencing, but that has proved to be instrumental for major discoveries in biology,” he said.