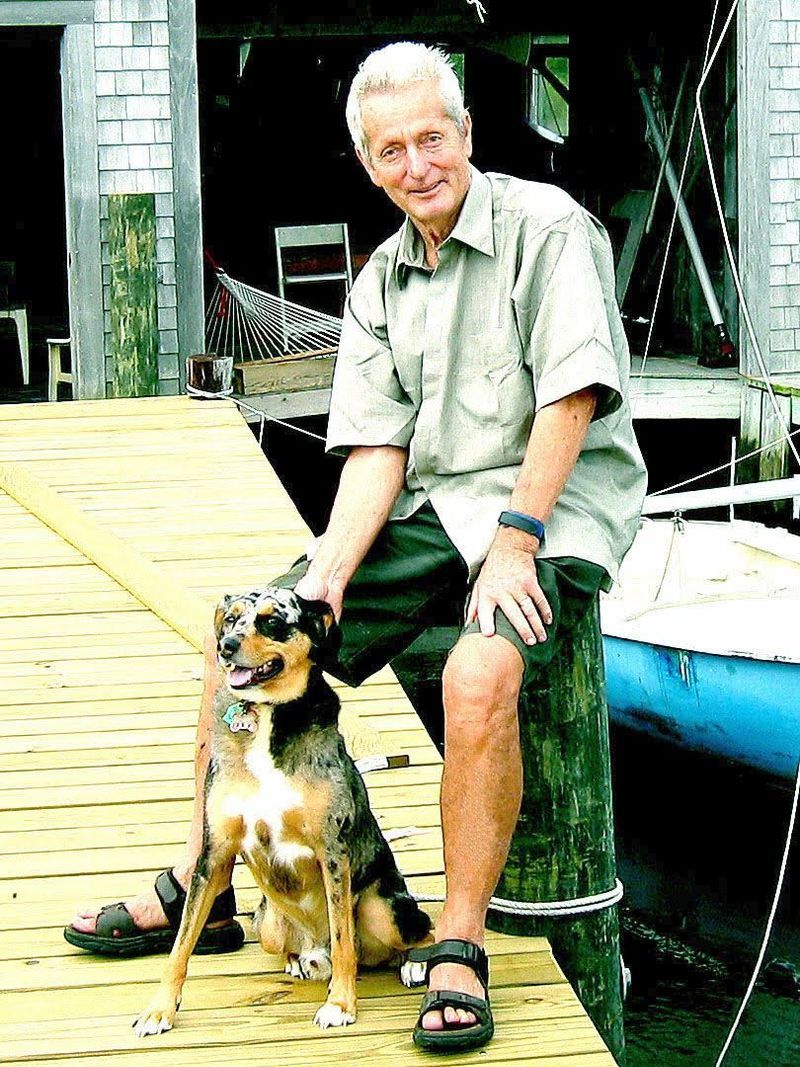 My father John Kanwisher, a scientist and inventor at the Woods Hole Oceanographic Institution, died peacefully in his sleep at age 95 on May 7. He coinvented the first electronically controlled diving rebreather, measured the first electrocardiogram from a whale, and played a central role in transforming the study of animal physiology from the lab to the wild through the use of telemetry devices he invented.

Family and friends remember him as an eccentric and adventurous free spirit with an insatiable curiosity and infectious enthusiasm.

“We were all blown away by his brilliance, enthusiasm and general rebellious and iconoclastic attitude,” Michael Fedak, a mammal physiologist at the University of St. Andrews, wrote to me in an email.

John grew up in Oneida, New York, the son of an Irish-American mother and a German immigrant father who arrived penniless in the US at age 17. John spent his childhood hunting, trapping, and working at his uncle’s farm and in his dad’s auto shop. He excelled at physics and math. He noted in an oral history recorded by Woods Hole Oceanographic Institution (WHOI) in 2004 that “I suppose technically we were below the poverty line, but in terms of environment it was the richest environment I can imagine.”

John received a full scholarship to the University of Rochester where he compressed three years of coursework into 18 months, then interrupted his studies to enlist in the Navy. During WWII he was posted on a ship in the Pacific, fixing radios and other electronic devices. At the end of the war, John married his college sweetheart, Joan Taylor, resumed his studies under the GI Bill, and graduated with a degree in optics in 1947.

Nature was a kind of giant Easter-egg hunt. And you always know there are going to be more eggs.

After completing his doctorate in biophysics in 1951, also from the University of Rochester, John took a position with the Air Force in Sacramento. But he and Joan hated the snobbiness and drinking habits of the Officers’ Club, and soon the couple set out looking for adventure, traveling up and down the East and West Coasts. In the Bahamas, John had a chance encounter with the noted Norwegian physiologist Per Scholander, who suggested he show up at WHOI and ask for a job. As John put it in his oral history interview, “I walked in off the street and they hired me. . . . I couldn’t believe it. . . . A few weeks later I went off on the [sailing research vessel] Atlantis. It just sort of blew my mind. . . . I climbed the mast and there were flying fish and dolphins. . . . I don’t know [how] they differentiated me from anybody else, but there I was.”

John and Joan settled in Woods Hole in 1953 in a house near Oyster Pond they built with their own hands, with the help of Joan’s father, a builder.

With Scholander, John sailed on a research vessel in the summer of 1954 to Labrador, Canada, where they measured the gas concentration of bubbles trapped in icebergs. In a paper on this work published in 1956, they argued that the very slow rate of gas diffusion through ice meant that “gas trapped in the glacier would remain unchanged for millennia. Analysis of such gas could therefore give information about the atmospheric composition at the time the ice was formed.” This insight was key to later work by others using ice cores to reconstruct the historical record of CO2 concentration in the atmosphere—foundational for modern climate science.

Joan joined John in Labrador that summer, traveling there on missionary vessels because women were not allowed on scientific research ships. The couple camped out in a tent and became friends with local missionaries and Inuits. Joan found her own innovative ways to use the Labrador icebergs: she hacked off chunks for tentside martinis.

A few years later, John turned tragedy into a unique scientific opportunity: a live whale was stranded on the beach in Provincetown, Massachusetts. Few studies of any kind had been done on living whales. In John’s words: “I wanted samples of breath to tell how the respiration works. I wanted to measure the heartbeats.” John knew he had to hurry because a beached whale wouldn’t survive for long. He enlisted his Woods Hole neighbor, Al Senft, who “stole some welding rods from the MBL [Marine Biological Laboratory] shop for electrodes to go through the blubber.” Next they needed to get electric power to the whale. “It was Christmas,” John recounted, “and I tore some Christmas tree lights down from somebody’s house and broke into another house and got 110 volts out to the whale, and we got marvelous EKG records.” John and Al published the first whale EKG in Science in 1960.

One of John’s inventions was an oxygen electrode, which continuously measured oxygen concentration in liquids, gases, and living tissue. This device in turn provided the basis for another device John invented with colleague Walter Starck: the first electronically controlled diving rebreather. Unlike earlier rebreather systems, their invention used helium rather than nitrogen (thus reducing risk of the bends) and adjusted the concentration of oxygen using the oxygen electrode. 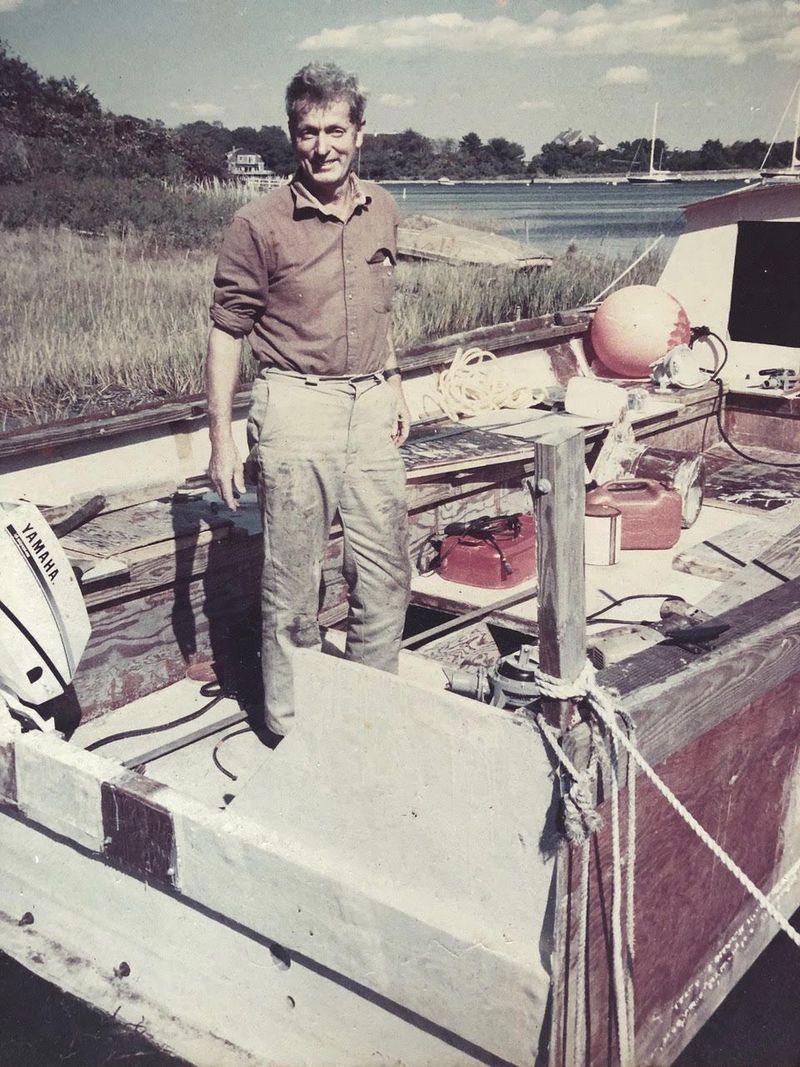 John was notorious for his inventive and rambunctious approach to science. Bertil Hille, who had spent a summer fellowship as a student under John’s mentorship in the early 1960s and is now a professor at the University of Washington, recalled his time using John’s devices to measure oxygen consumption and production in algae. “The project had many John characteristics: It required sliding around on intertidal rocks to collect specimens in pails of seawater,” he wrote in an email to me. “There was no particular hypothesis. Accuracy and statistics were not highlighted. There was a lot of scintillation. Many old pieces of apparatus were cobbled together, and new ones were invented in partially hazardous ways. It was fun.”

John’s most important scientific contribution was to spearhead a transformation in the study of animal physiology. Central to this evolution were John’s inventions of small physiological sensors with transmitters that could be attached to wild animals. Measuring body temperature and heart rate, they used telemetry to send data in real time through air or water.

In an early telemetry study, John’s longtime collaborator Frank Carey secured an experimental animal by hiding with a net in a refrigerator box at the Falmouth town dump and pouncing on a seagull. Newly fitted with a radio transmitter and spray painted stylishly in DayGlo orange for ease of visual tracking, the seagull was released. John followed in hot pursuit, veering around Woods Hole while holding his radio antenna out the car window and listening to the gull’s heartbeat. After losing track of the gull, he could still tell its approximate location from the radio signals. John and Frank puzzled over the gull’s remarkable behavior: it flew to Martha’s Vineyard and back at the exact same time each day. The mystery was solved when WHOI received a phone call from the Steamship Authority asking if they knew anything about the orange seagull that was following the ferry.

In another telemetry study, John teamed up with his student Geir Gabrielsen and me (then in college) to kidnap a few baby cormorants from the nearby Weepecket Islands, raise them at home on cat food, and fit them with devices that transmitted their heart rates as they dove freely near our boathouse in Woods Hole. Previous lab research had shown that birds and mammals drastically slow their heart rates when forcibly submerged, and researchers had interpreted it as a “diving response” to conserve oxygen. But when we watched our tame, home-reared cormorants diving freely, we found little heart rate slowing. The “diving response” was actually a fear response. This work underscored the importance of studying animals behaving freely in their natural habitats, and was published in Science in 1981.

John loved sharing the excitement of science with others, teaching courses at Harvard University and MIT and traveling widely to lecture on his work. On one occasion, he returned from an expedition to Africa just before a lecture tour with a big black hole in the front of his mouth from a tooth that had fallen to the bottom of Lake Kivu. Joan insisted that he could not give talks looking like that. So John went down to his basement, fashioned his own false tooth out of wood, and headed off.

John’s delight in science is amply evident in the 2004 oral history: “It was the golden age of field biology. I was first out there with the high technology, and everything was interesting. The first fish I towed up from the Pacific had 25 atmospheres of pure oxygen in his swim bladder. . . . Everything was like that. Some fish . . . had antifreeze in them. Nature was a kind of giant Easter-egg hunt. And you always know there are going to be more eggs. You never run out of eggs.” 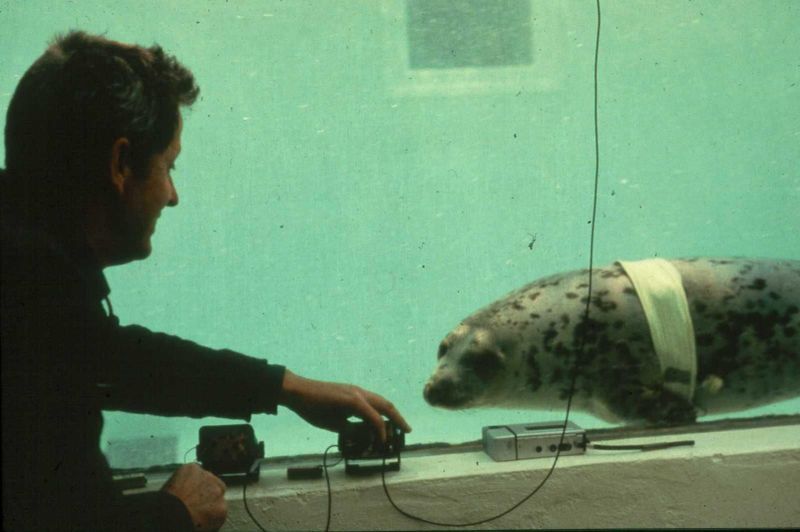 John was known in Woods Hole for his raucous laugh and his odd marine constructions. He used newly introduced epoxy resins and glass fiber cloth, along with very thin and flexible plywood to make a series of experimental boats. These required inner skeletons to stabilize them, and for this he used pieces of aluminum and plastic ladders, and at least once, a windsurfer. They were often stabilized by pontoons connected to the main hull by a novel construction component with the perfect combination of lightness, flexibility, and cost: remaindered skis. When the boat design intersected the floor, John sawed a hole in the floor to accommodate the design.

John navigated several of these contraptions solo down the Inland Waterway to Florida, one of these trips seated like a king high atop a yellow vinyl bar stool he had fished out of the MBL dumpster. Another vessel John attached to his roof rack before driving to Alaska and putting in on the Yukon River. After a few days solo on the river he made friends with an indigenous Alaskan family, gave them his boat, and drove straight home, pleased as punch.

Nancy Kanwisher is a cognitive neuroscientist in the Department of Brain & Cognitive Sciences and an Investigator at the McGovern Institute of Brain Research at MIT.