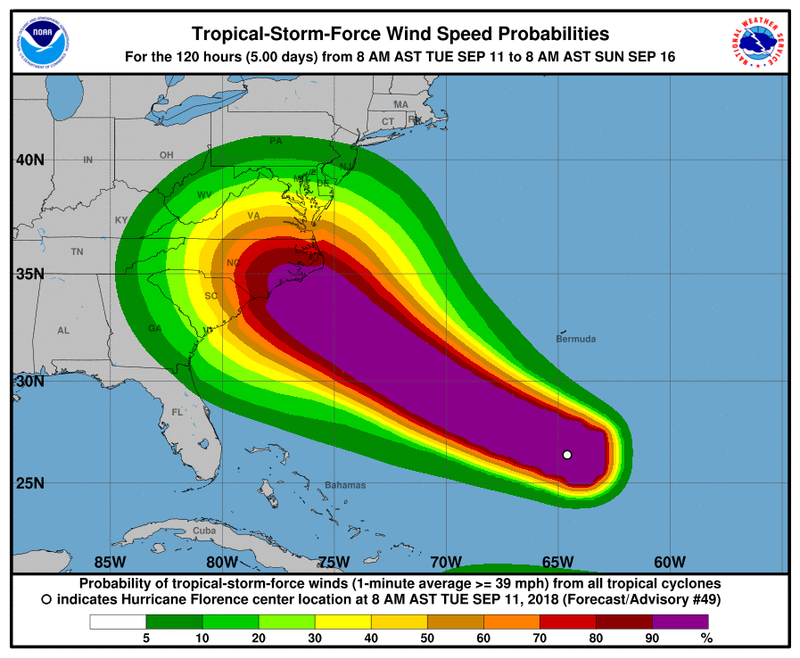 As Hurricane Florence gathers speed in the Atlantic Ocean en route to making landfall on the East Coast later this week, officials in South Carolina, North Carolina, and Virginia have issued evacuation orders for low lying communities near the shore. Many universities in the projected path of the category-4 storm have cancelled classes and in some cases forced students to leave campus.

“This is the biggest, most potentially dangerous storm I’ve seen here in 20 years,” Andrew Read, director of the Duke Marine Lab, tells The Scientist. “We are taking every precaution to ensure everyone’s safety.” 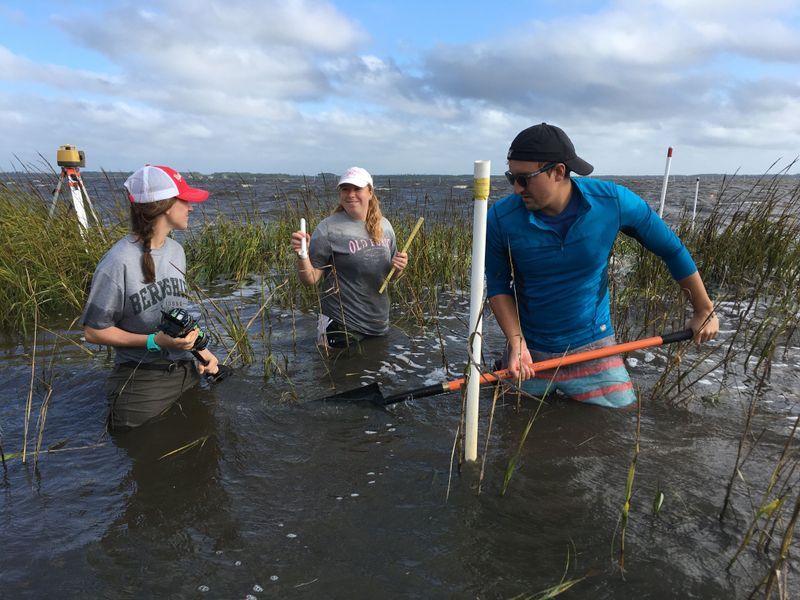 Dave Eggleston, director of North Carolina State’s Center for Marine Sciences and Technology in Morehead City, North Carolina, spent the day at Pamlico Sound pulling acoustic hydrophones out of the water. His graduate student uses them to record the soundscape underwater, and while it would be interesting to hear what happens during the storm, the predicted strength of Florence made them decide to store the $3,500-apiece instruments.

“We’re always walking that fine line between leaving instruments out and risk losing the instruments. We lost six of eight of our hydrophones with Hurricane Irma in the Florida Keys” last year, Eggleston says. His student also released fish she had kept in a tank to characterize their sounds.

Researchers at the University of North Carolina-Chapel Hill’s Institute of Marine Sciences in Morehead City also collected instruments and equipment that could be damaged by the storm. Tomorrow, the facility’s HVAC system will be shut down to prevent intake of salty, humid air that can damage the interior of the building. “We want to come back online quickly after the storm,” says Rick Luettich, the institute’s director. “It’s a resiliency thing at this point.”

At the Center for Marine Science, part of the University of North Carolina Wilmington, researchers are moving samples to freezers with backup generators and also pulling boats out of the water. Students have been issued a mandatory evacuation order. Rodent labs are on the third floor of a new building on the main campus, which Aswani Volety, dean of the college of arts and sciences and executive director of the Center for Marine Science, says is very secure.

According to the National Weather Service, Florence could cause “life-threatening, catastrophic flash flooding” as well as a dangerous storm surge. Volety says he’s less worried about flooding at his labs than he is about roof damage and leaks from the wind and rain. “What we worry about are the biological samples that staff and students have collected for many years,” he says.

Volety hasn’t decided yet whether he will evacuate along with his students. Read says he will stay in place, and so will graduate student Everette Newton, who also is the mayor of Beaufort.

Rarely have the Carolinas experienced a storm of Florence’s magnitude. According to The Atlantic, only two category-4 hurricanes have been recorded hitting those states, and never a category 5.

See “Wild Horses Can Handle Hurricanes. What About Climate Change?”

Researchers are taking advantage of the remarkable event to monitor how habitats respond. Duke professor Dave Johnston, for instance, plans to take aerial footage via drone before and after the storm to observe how Florence alters nearby barrier islands. Duke’s Dana Hunt, a microbial ecologist, will be profiling microbial communities as they experience the surge of seawater topped off by the hurricane’s freshwater rain.

Eggleston says there are a number of research projects from North Carolina State to observe the before-and-after situations, including the soundscape, the state of oyster and scallop aquaculture, and the population of blue crabs in the region. It turns out that storms actually help replenish blue crab numbers by pushing large amounts of seawater—along with larval crabs—into estuaries where the crabs continue their development. “The thing about hurricanes is it’s a great large-scale experiment,” he says.

Read has GPS tags on whales near Cape Hatteras, and he’ll be watching their data to see if their behavior changes. “We want to see what they do,” he says. “We will take advantage of the natural experiment that this event presents, if we can, safely.”

Update (September 11): The article has been updated to include comments from Eggleston and Luettich.