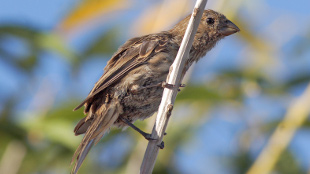 House FinchWikimedia, Matthew FieldScientists have discovered what many ex-smokers already realized: that cigarettes are for the birds. And some birds are happy to take them. According to a study published today (December 5) in Biology Letters, two songbirds species—the house finch and house sparrow—regularly line their nests with the innards of discarded cigarette butts. Some birds collected upwards of 40 butts for a single nest. And the result of their ashtray-style abode: fewer mites and lice to pester their chicks.

“It’s not a big surprise,” said Mark Hauber, who studies the evolution of avian behaviors at Hunter College in New York, and was not involved in the study. “We always knew that some birds put pungent herbs in their nests to keep insects and mites at bay, so why not use cigarettes?” They are readily available in any urban environment and tobacco provides a natural insect repellent.

The cottony guts of cigarette butts may provide the birds downy insulation for their nests, the researchers hypothesized, and the plethora of chemicals and traces of tobacco that the filters contain might also be useful for repelling parasites, which can stymie chick development and health. To test whether cigarettes repel insects, the researchers created thermal parasite probes—heating elements, powered by a battery that would warm to a chick’s temperature, attracting parasites. They then covered the probes in Marlboro cigarette butts, either unused or smoked, and sticky tape to capture the parasites that took the bait.

For the smoked cigarette butts, the team used an artificial smoker—a plastic bottle with a diaphragm and cigarette-sized mouth—“which I love,” Hauber says. “You never know how people smoke their own cigarettes and as a scientist we always appreciate a good control,” Hauber said. By using the artificial smoker, his team is not introducing lipsticks, bad breath germs, or—as the study was done in Mexico—the hints of spicy food. Additionally, the method helped alleviate some personnel apprehensions, Garcia said. “I was a little concerned with the ethical consequences of exposing my students to cigarette smoke.”

When the researchers placed their butt-dressed chick mimics into nests, they found that used butts attracted significantly fewer parasites than unused butts, suggesting that the chemicals that accumulate in cigarette filters during the smoking process do, indeed, deter parasites.

After the breeding season, the researchers collected the nests and determined the amount of cigarette material and parasite load, and found a clear correlation: more butts, fewer bugs.

“I was surprised,” Garcia said, “I wasn’t expecting such a clear pattern.” But more studies are needed to fully understand the phenomenon. Birds have very good sense of smell, which might suggest they are choosing used butts over other materials to rid their nests of burdensome parasites. But it is also possible that birds select butts “for their insulating or other properties,” Pierre Deviche, who studies physiological adaptations of birds at Arizona State University, and who was not involved in the study, wrote in an email to The Scientist.

The health risks that might come with any insect-free benefits of cigarettes also beg for further study. “[C]igarette butts contain toxic chemicals and traces of pesticides,” Deviche wrote. “One could imagine that some of these compounds can diffuse into eggs through the shell, which we know is relatively porous, and thereby affect embryonic development negatively. It is also conceivable that some chemicals affect young birds after [they] hatch or even incubating parents.”

Though Garcia thinks toxicity is unlikely to accumulate to dangerous levels in a bird’s short life span, he and his students are already getting started on studying the causes and consequences of bird’s cigarette habits—and whether or not they should kick the habit.