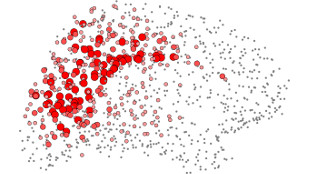 PLOS, LIZA GROSSAs the dust settles around the launch of President Obama’s BRAIN Initiative, researchers are assessing the state of brain-mapping science. BRAIN aims to map the circuits of the human brain, linking electrical and chemical activity to behavior and cognition. Some believe mapping the brain and its activities would demystify the human mind and promote the development of new treatments. Others maintain that it is impractical to map the entire brain, with its seemingly infinite connections.

“It is seductive to compare this project to the Human Genome Project,” said Emery Brown, a neuroscientist and anesthesiologist at the Massachusetts Institute of Technology, and an advisor to the BRAIN Initiative. However, he added, “human brain mapping is far more complex.”

Comparatively speaking, neuroscientists are perhaps as close to mapping the entire brain today as Watson, Crick, and Franklin were to sequencing the entire human genome in the 1950s. Today’s...

The brain can be observed at several different levels—from molecules to cells, to circuits and systems, and to the entire organ and its vast networks. Even within these individual levels, many scientists choose to focus on elucidating either structure or function. Researchers observe the brain through various different lenses, each allowing a unique and nuanced view of the complex organ.

Of course, BRAIN is not the only large-scale initiative that aims to better scientists’ understanding of central nervous system’s headquarters. For example, in June the Montreal Neurological Institute and the German Jülich Research Centre unveiled the BigBrain atlas—a 3-D digital rendering of the brain that is freely accessible online, and was the result of a 10-year effort that employed novel techniques in gross anatomy and tissue slicing, plus cutting-edge computer technology. And while the atlas, part of the European Human Brain Project, serves as an excellent reference of structure, it doesn’t say much about function.

Then there is the Human Connectome Project, led by the researchers at the University of California, Los Angeles, Massachusetts General Hospital, Washington University in St. Louis, and the University of Minnesota. Members of this venture are using imaging techniques to create structural and functional maps of the brain. Elsewhere, a team led by investigators at the Allen Institute for Brain Science in Seattle is compiling maps of gene expression to help determine the structure and function of the brain.

At the moment, fully resolving the complete structure and every function of the brain is a distant dream. “The reason we don’t understand the brain as a big map of activity is because we don’t have the tools to do it,” said John Donoghue, a neuroengineer at Brown University who is an advisor to the BRAIN Initiative.

A number of established techniques deliver a top-down perspective of the brain. Among several variations of magnetic resonance imaging (MRI), the most popular is functional MRI (fMRI). This non-invasive approach provides a simple method of demarcating brain function. It relies on the tenet that blood flow and subsequent oxygen consumption in a specific brain area will increase when that area is used by a person to complete a task or behave in a certain way.

Positron emission tomography (PET) scanning tracks radioactively labeled elements injected into a subject’s bloodstream while she performs a behavior, such as reading. These elements—molecules that may bind a certain receptor in the brain—are detected using PET scans, elucidating the neurochemicals involved in particular behaviors.

Brain recording techniques like electroencephalography (EEG) and magnetoencephalography (MEG) also provide large-scale functional perspectives of the brain. EEG can record the electrical activity in the brain, while MEG records the magnetic fields generated by these electrical activities. These methods can discern the characteristic and localized electrical activity underlying behaviors and disease. A study published in Biological Psychiatry last month, led by investigators at the University of Amsterdam, demonstrated that EEG recording can differentiate subtypes of attention-deficit/hyperactivity disorder, lending clinicians another layer of diagnostic objectivity.

By focusing on the molecular and cellular characteristics of neurons, scientists can study the brain using a bottom-up approach. For this, animal models are often used. Scientists can genetically engineer various animals to lack certain populations of neurons, receptors or neurotransmitters, and then study the resulting effects on behavior.

Fluorescence-based approaches have already revolutionized the study of the brain. Brainbow—an approach that can differentially light up single neurons in the brain—and other fluorescent techniques allow scientists to scrutinize individual neurons.

And then there are the tried and true methods, like retrograde and anterograde tracing in model systems that reveal how neurons connect.  First, researchers inject a dye, genetic construct, protein, or virus into a group of neurons. That biological label will travel down a neuron to the the cells with which it synapses in anterograde tracing, or up a neuron to neurons that synapse with it in retrograde tracing, revealing its connections. Using retrograde transneuronal transport of rabies virus from the kidney, Peter Strick, a neurobiologist at the University of Pittsburgh demonstrated that motor areas of the rat cortex share connections with the excretory organs last May. His work was published in The Journal of Neuroscience.

Brain imaging allows scientists to discern the function of large portions of the brain. Molecular and cellular methods allow them to ascertain function from individual neurons or clusters of neurons. But focusing on the middle scale—where these circuits and networks merge—still eludes scientists.

“You can imagine going in two directions,” said Eve Marder, a neuroscientist at Brandeis University and an adviser to the BRAIN Initiative. “One is to increase the resolution of large-scale imaging,” she said. Going up the scale, current molecular and cellular techniques could also be improved to allow scientists to see “more cells at the same time with more modalities,” she added.

“We have micro-tools and macro-tools, but we don’t have the middle scale,” said Brown’s Donoghue. But emerging tools and techniques are paving the way.

Using optogenetics, for example, scientists can control specific populations of neurons and observe the behavioral effects in live animal models. Animals can be genetically engineered so that specific classes of neurons or receptors express an opsin, a light sensitive protein complex. Light of that opsin’s wavelength can be shone on an exposed part of the brain to specifically activate those neurons or receptors.

And then there are new and improved imaging techniques, which allow scientists to study both form and function. Recently, a team of investigators at the Howard Hughes Medical Institute (HHMI) Janelia Farm Research Campus in Ashburn, Virginia, demonstrated the active imaging of the whole zebrafish brain at the resolution of single neurons using light sheet fluorescent microscopy. This technique allowed them to see the activity of 80 percent of the 100,000 neurons that compose the zebrafish brain in live action every 1.3 seconds.

Key to the study, led by HHMI’s Misha Ahrens and Philipp Keller, were the genetically engineered zebrafish whose normal voltage sensing calcium proteins were fluorescently tagged. By shining sheets of light with a microscope into their brains, the researchers were able to visualize the real-time activity of whole populations of neurons.

Because this technique relies on light penetrating tissue, Keller points out that it can’t yet readily be adapted to larger brains, like those of mice or humans. Nonetheless, recording activity from a whole brain, even in a model system, could supply that middle scale.

Another approach that might help bridge the gap is CLARITY—clear, lipid-exchanged, anatomically rigid, imaging/immunostaining compatible, tissue hydrogel—a technique developed by Karl Deisseroth at the Stanford University School of Medicine. In this method, all fat is washed away from a brain sample and replaced with a hydrogel, effectively making the sample transparent and ready for investigation by microscope.

Still, scientists agree that no singular method can unlock all the brain’s secrets.

“I think a lot of the effort is going to be developing and especially combining technologies to get as much information as we can about all kinds of functions and behaviors,” said Ahrens. “Combining multiple techniques usually leads to more than the sum.”

Coming to fully understand the human brain “is going to require interdisciplinary science of enormous scope,” Rockefeller University neurobiologist Cornelia Bargmann, co-chair of the NIH planning group on BRAIN, told reporters during a September press briefing. Doing so, she said, is not strictly a matter of neuroscience, “but also molecular genetics, physics, engineering, computer science, nanoscience, and mathematics.”