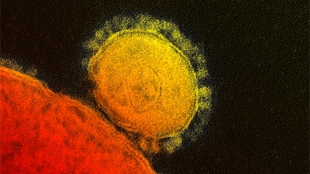 Transmission electron micrograph of Middle East respiratory syndrome (MERS) coronavirusNIAIDUpdate (May 28): The CDC today said that the Indiana patient did not spread MERS to a business associate in Illinois. See “CDC: Business Meeting Did Not Spread MERS.”

An Illinois resident has contracted the coronavirus that causes Middle East respiratory syndrome (MERS) from a patient in Indiana that was hospitalized late last month, the US Centers for Disease Control and Prevention (CDC) confirmed this weekend (May 17). This is the first documented transmission of MERS within the United States.

According to Melaney Arnold, a spokesperson for the Illinois Department of Public Health (IDPH), the Illinois man, who is not showing symptoms of the respiratory illness, met with the Indiana patient twice before that patient was diagnosed with MERS. Their first meeting lasted 30 to 40 minutes on April 25, she said, and included two...

The Illinois resident—whose identity is being protected by the CDC and other health agencies involved in the investigation—has tested positive for antibodies to the MERS virus in blood samples, but the virus has not shown up in nasal swabs. This, according to Purdue University structural biologist Andrew Mesecar, indicates that the man’s immune system likely fought off a full-blown infection. “It means his immune system has encountered the virus,” he said. “The likelihood is that it took care of the virus.”

The IDPH, along with local health departments, administered an initial nasal swab on the man on May 5. Those samples tested negative for the MERS coronavirus (MERS-CoV). But a subsequent blood test, administered on May 9, indicated the presence of MERS antibodies. Those results came back May 16. “Anybody that was identified as a close contact, we reached out to and we monitored on a day to day basis,” said Arnold.

MERS emerged in Saudi Arabia in 2012 and has sickened 570 people and killed 171 patients in the region, according to the World Health Organization. Health officials investigating the spread of MERS have documented weak human-to-human transmission, but most of those occurred in hospital settings, where close, sustained contact and exposure to bodily fluids is highly likely. The apparent transmission of the MERS-CoV from the Indiana patient to the patient’s Illinois-based business associate is one of the first documented instances in which casual contact seems to have resulted in spread of the virus. “Now we understand that it’s possible to transmit the virus via those sorts of contacts,” Mesecar, who is working on developing small molecule antiviral inhibitors that target two proteases of the virus, said. “There’s a heightened sense of how we have to be careful with MERS patients.”

Since the CDC confirmed the transmission, the Illinois resident has tested negative for MERS after another nasal swab over the weekend, according to agency spokesperson Barbara Reynolds.

The CDC, in collaboration with state and local health departments, is monitoring several other people who came in contact with the Indiana patient as he traveled from Saudi Arabia to northern Indiana, through Chicago, in late April. This, said Reynolds, includes fellow passengers on planes and buses on which the Indiana patient traveled. “We may find other people that have been exposed and had the same reaction,” she said, emphasizing the fact that although he was exposed to the coronavirus, the Illinois man did not likely have full-blown MERS.

Another patient, a Saudi citizen who is a health-care worker, tested positive for MERS earlier this month. That patient traveled from Saudi Arabia to Florida on May 1 and was admitted to an emergency room there on May 8, where he waited several hours to be seen by a doctor, Reuters reported last week (May 14).

As officials continue to track the virus in the U.S. and around the world, researchers are working to develop treatments or vaccines against MERS. Mesecar said that his team is just beginning to test protease inhibitors against the live virus in cell culture.

Virologist Ian Lipkin from Columbia University, speaking today (May 19) at the American Society for Microbiology annual meeting being held in Boston, Massachusetts, said that these latest developments necessitate more monitoring and research. “Fortunately, there hasn’t been evidence yet of significant secondary spread,” he said. “But we do need to monitor this virus closely to examine its potential to move from the lower airways to the upper airways and to become more capable of spread.”