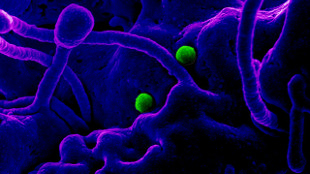 Until last month, outbreaks of Middle Eastern respiratory syndrome (MERS) had been restricted to countries within the region for which the infectious disease was named. Since last month, there have now been more than 165 confirmed cases of MERS in South Korea, including 23 deaths, according to the World Health Organization (WHO). China, too, has confirmed one case stemming from the South Korean MERS outbreak. While a report coauthored by WHO and South Korean health officials released last week (June 13) suggested that the rate of new cases in the country was declining, it will be several weeks before investigators can tell whether the outbreak is truly under control.

“It’s a very complex outbreak,” said Peter Embarek, the WHO’s lead specialist on the MERS coronavirus (MERS-CoV). According to Embarek, the number of hospitals affected by the outbreak and the time it took to diagnose the index case...

The outbreak began when a 68-year-old man returned to Seoul from a business trip that included stops in Saudi Arabia and the United Arab Emirates, two countries in which MERS is endemic. The man was diagnosed with MERS in late May, but not before he had visited several health-care facilities throughout the city. According to Embarek, shopping around for care is a common practice in Seoul. The virus quickly spread within the hospitals, mainly among sick and elderly patients—the same population most affected by smaller hospital-associated outbreaks in Saudi Arabia over the last few years, according to Vincent Munster, a virologist who works on MERS-CoV at the National Institute for Allergy and Infectious Diseases in Hamilton, Montana.

“What you now see in South Korea is actually pretty similar to what has happened in Saudi Arabia,” Munster said. “This virus doesn’t seem to transmit that easily in healthy people.”

South Korean health officials are now committed to tracing all potential contacts and assigning each one a health-care worker to watch out for signs and symptoms of the disease, Embarek said. Because the incubation period for MERS-CoV can reach two weeks, it will take several weeks to know if this strategy is working, he added. Tracing contacts should also help researchers pinpoint exactly how MERS-CoV is transmitted from person to person. Although the virus is believed to travel in respiratory droplets, Munster said there could be other routes of transmission that haven’t been confirmed. “We’re still a little bit in the dark,” he said. Embarek added that there is also evidence that the virus can live on surfaces such as door handles, but it’s not clear for how long.

Part of the reason why the route of transmission is not well understood is because cultural norms in the Middle East have thus far prevented autopsy studies on MERS victims, said Stanley Perlman, who studies coronaviruses at the University of Iowa. Perlman said it’s likely that more information could come from the South Korean victims whose families may be more likely to allow researchers to perform autopsies.

In the meantime, scientists and health officials are taking some comfort in finding that the MERS-CoV genome has not changed much in its travels from the Middle East to South Korea and China, according to preliminary WHO research based on viral sequences generated from patient samples.

That’s good news for researchers who are using the original virus or its sequence to look for drug targets. Some small molecule screens have pulled out promising candidates that block viral replication, and several groups have developed monoclonal antibodies that efficiently block the interaction between the MERS-CoV envelope spike glycoprotein and a human protein called dipeptidyl peptidase 4, which is required for viral entry into cells. However, researchers have not been able to move these drug candidates beyond cell lines, because, according to Perlman, “there’s no animal model that’s really good right now.” Last year, his group developed a mouse model of MERS, but he said the mice didn’t fall as ill as infected humans can. “It wasn’t useful for the most important question, which is why do people get sick with this virus.”

Some scientists, including Munster, have developed nonhuman primate models but, like mice, these animals don’t become sick the way humans do, and they only show symptoms for a short time. To overcome this, Perlman said, researchers are trying to replace the receptor that MERS uses to enter mouse cells with the human version, while others are adapting the virus to the mouse, an approach that worked for some scientists working on SARS.

Another approach is to eliminate the virus from its animal reservoirs—camels. Munster, who studies MERS pathogenesis in camels, said that doing so could help prevent future outbreaks among humans. A predominant theory among researchers studying zoonotic transmission is that MERS-CoV is spread from camels to their handlers. However, Perlman said, only a small percentage of people living in Saudi Arabia ever come into direct contact with camels, and many MERS cases are diagnosed without a clear link to the animals. This has led some to wonder whether healthy people can carry and spread MERS without experiencing disease-related symptoms, and serological testing in Saudi Arabia suggests this could be the case.

Embarek said that, so far, South Korean health authorities haven’t traced any transmission from asymptomatic or mild cases in the current outbreak. Although it will be important to understand the role of such cases in MERS outbreaks going forward, for now, investigators are focused on bringing the current outbreak under control. Although this is the first time such a large outbreak has occurred outside of the Middle East, it’s not the first time such an outbreak has occurred in a hospital setting. “Applying a combination of appropriate and systematic controls has bought all previous hospital outbreaks under control,” Embarek said. He added that South Korea and other countries have the capacity to do the same, but preparation is also key. “It’s important to have both elements in place.”