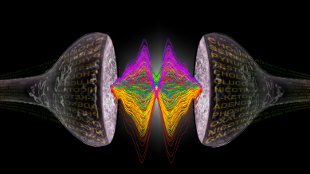 A rendition of the bioinformatics analysis superimposed between two neurons. Combined with the METLIN metabolite database, the analysis ultimately revealed DMS as a naturally occurring metabolite and as an active molecule in chronic pain. GARY SIUZDAK AND GARY PATTI

An analysis of the metabolic profile of a rat model of chronic pain has identified novel dysregulated metabolites that may underlie the condition, according to a study published today (January 22) in Nature Chemical Biology. If the results hold up in humans, one of these metabolites, which has not previously been associated with neuropathic pain, could potentially serve as both a molecular indicator of and therapeutic target for the condition, for which few treatment options exist.

The findings are “a great example of how metabolomics is leading to novel insights into, in this case pain, and how that’s mediated,” said Lloyd Sumner, a metabolomics researcher at the Samuel Roberts...

In the United States, more than 30 percent of adults suffer from chronic pain of one form or another. Neuropathic pain is a form of chronic pain induced by previous nerve damage, like the phantom pain felt by those who have lost limbs. “Neuropathic pain is the worst,” because it’s the hardest to treat, said Gary Patti, an assistant professor at Washington University in St. Louis and lead author of the study. “It is a disease with an unmet medical need.”

While a research associate at the Scripps Research Institute in La Jolla, California, Patti and his then-research advisor, Gary Siuzdak, senior director of the Center for Metabolomics and Mass Spectrometry and professor of Chemistry and Molecular Biology at Scripps, used an animal model of the condition, in which rats are subjected to tibial nerve transection (TNT)—that is, the tibial nerve in one leg is severed and allowed to heal. Three weeks later, these animals apparently continue to experience pain, though the wound itself has healed.

Rather than studying the genes involved, or the proteins they encode, the researchers identified instead potential metabolic players in this response. Metabolites, after all, are the ultimate molecular arbiters of biological function, the molecules upon which proteins often act.

The team used an approach called untargeted metabolomics to profile the metabolites at the site of injury, the neural cell body of the damaged nerve, the dorsal horn (where the damaged nerve connects to the spinal cord), , and in the blood. It was essentially a molecular fishing expedition—collecting boatloads of data that can point to molecules that may be involved.

“We are seeing many more metabolites than can be accounted for by the canonical pathways in biochemistry textbooks,” Patti said. “The untargeted approach allows us to explore that space.”

In total, the team observed some 733 mass spectrometric peaks whose levels varied at least 2-fold between control and TNT animals. The vast majority of them were localized not at the site of injury, but at the dorsal horn of the spinal cord. In particular, the researchers noticed differential expression of several members of the sphingomyelin-ceramide pathway, a lipid metabolic pathway linked to, among other things, myelin formation and programmed cell death. “That screamed at us that this pathway was important,” Siuzdak said.

The team then tested these different molecules directly to see whether they could induce a pain response on their own. Indeed, one such metabolite, called N,N-dimethylsphingosine (DMS),  induced symptoms akin to neuropathic pain when injected directly into the animals at comparable concentrations to those found in TNT rats a few weeks after injury. The authors also determined that DMS may function by activating astrocytes, inducing them to release cytokines such as IL-1beta and MCP-1, both of which are associated with inflammation and pain.

If validated in humans, DMS could potentially serve as a biomarker of for neuropathic pain, Sumner said. Furthermore, “by defining specific molecules involved in the pain response, [the finding] also provides a pathway for mediating the pain management,” he added. “If they can mediate how those molecules are made and modify that with inhibitors or other medications, then the opportunity for pain management is substantial.”

Indeed, Siuzdak calls his approach “therapeutic metabolomics.” “You survey the pathways, find molecules that are dysregulated, and then find enzymes that produce those molecules. We are currently trying to figure out explicitly what enzyme produces DMS, because that’s a much more specific target.”

(See this month’s feature article on other efforts to manage chronic pain.)