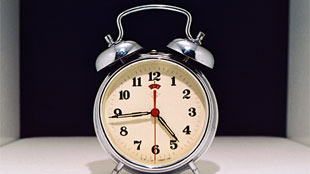 Clock, by Jorge BarriosPeople often make decisions that they will regret later in life, from getting an embarrassing tattoo to spending too much money. Now, US scientists have found one reason behind these poor choices—a belief in personal stability.

Through several experiments involving thousands of volunteers, Jordi Quoidbach from Harvard University showed that people of all ages believe that they had changed a lot in the past but expect to change very little in the future.

This imagined psychological plateau, dubbed the “end of history illusion,” means that people “regard the present as a watershed moment at which they have finally become the person they will be for the rest of their lives,” Quoidbach wrote. As a result, we may overindulge our current preferences on the false assumption that we will be the same indefinitely.

“This is a fascinating finding with important implications for decision-making,” said Tali Sharot, a...

Together with Harvard’s Daniel Gilbert and Timothy Wilson from the University of Virginia, Quoidbach recruited volunteers through a French television show called Their Secrets of Happiness, which invited viewers to take part in social science experiments on the website. The team used this channel to ask more than 17,000 people, aged 18 to 68, to answer questions about their current personality, preferences, and values, and again as if they were responding either 10 years earlier or 10 years in the future. For example, they reported how much they valued or would value success, or whether they had or would have the same favorite hobby.

The amount of future change that the volunteers predicted was always smaller than the amount of past change they reported. For example, 19-year-olds felt they would change less in their next decade than 29-year-olds thought they had done in their previous one. And while the illusion was stronger in younger people, every age group from teenagers to grandparents seemed to think they would stay as the people they had become.

What causes the end of history illusion? The team think it is unlikely that the study volunteers are overestimating how much they changed in the past, since their estimates were almost identical in size to those from an independent psychological survey, where recruits answered the same personality questions a decade apart.

Instead, the team thinks that people underestimate the future, either because they believe that our current status quo is optimal or because they feel they know themselves well. “People are motivated to think well of themselves and to feel secure in that understanding, and the end of history illusion may help them accomplish these goals,” Quoidbach wrote.

The team also thinks that people find it harder to construct future experiences than to reconstruct past ones. If it is difficult to imagine how our personality or preferences would change in the future, we might assume that such changes are unlikely.

Daniel Schacter, a psychologist from Harvard University who was not involved in the study, agrees with this interpretation. “We have seen some evidence of this greater difficulty associated with future construction in several of our neuroimaging studies,” he said.

“There has been a dramatic increase in research that compares remembering the past and imagining the future, [which shows] impressive similarities in the neural and cognitive processes associated with retrospection and prospection,” Schacter added. “But recent evidence has also indicated differences between the two, and this paper provides compelling evidence of a particularly striking and potentially important difference.”