Scientists have used CRISPR technology to edit out a lung-disease–causing gene while mice were in utero, rescuing the function of the lung and not affecting other organs, they reported on Wednesday (April 17) in Science Translational Medicine. Following the inactivation of the target gene, the mice survived after being born, unlike untreated animals.

Because mice carrying the disease will die soon after birth, the gene-editing intervention needed to occur before delivery, say the authors. They injected CRISPR-Cas9 into the amniotic fluid of pregnant mice whose fetuses carried a mutated version of the SFTPC gene that codes for a protein that helps prevent the lung from collapsing when emptied, states the paper.

The authors report that gene editing was successful in the target cells in the lungs of 20 percent of the mice.

“What’s exciting about this paper is that they showed specific targeting to just the affected organ, and even to specific cells within the lung,” Graça Almeida-Porada of Wake Forest University who was not involved with the study tells STAT. In addition, the report states that the genetic change was not present in the sexual reproduction cells, indicating that it can’t be passed down to offspring.

This proof-of-concept study demonstrates that it is possible to edit genes in utero. “What we see as the future is a minimally invasive way of treating these abnormalities at their genetic origin,” coauthor William Peranteau of Children’s Hospital of Philadelphia tells Wired.

The authors state in the report the need to optimize the injection techniques and reagent delivery methods to avoid exposing the pregnant mother. In addition, the team is “working to increase the percentage of successful edits and the rate of survival, and are optimistic on both counts,” reports STAT. Because the researchers used CRISPR to inactive the gene rather than repair it, the team would not be able to use the same procedure on humans because humans cannot survive without a functioning copy, according to STAT. Peranteau tells Fierce Biotech the team will need to test different CRISPR delivery techniques before moving on to human trials. 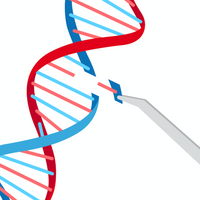