A population explosion that began late last year has yet to abate. Meanwhile, researchers are exploring novel approaches to combat the nonnative species.

Bianca Nogrady is a freelance science journalist and author who is yet to meet a piece of research she doesn't find fascinating.

ABOVE: Exterminated mice on a farm in Gilgandra, New South Wales
MELANIE MOERIS

Just before Christmas last year, Julie Leven and her husband Des took their camper up to visit their son in northern New South Wales, Australia. Driving back at night to their home in Gilgandra, around 430 kilometers northwest of Sydney, they saw masses of white spots moving across the dark road surface. The spots, they soon realized, were mice.

Once they reached their house, the Levens saw a scene of rodent devastation. Mice had invaded their home in such numbers that it was unlivable. The creatures had gnawed their way into the pantry and ruined all the food they could get into. Their droppings and pungent urine were spread from one end of the dwelling to the other, across soft furnishings and bedding. The rodents had even eaten the insulation around the engine wiring in two tractors and ruined their harvested hay bales. 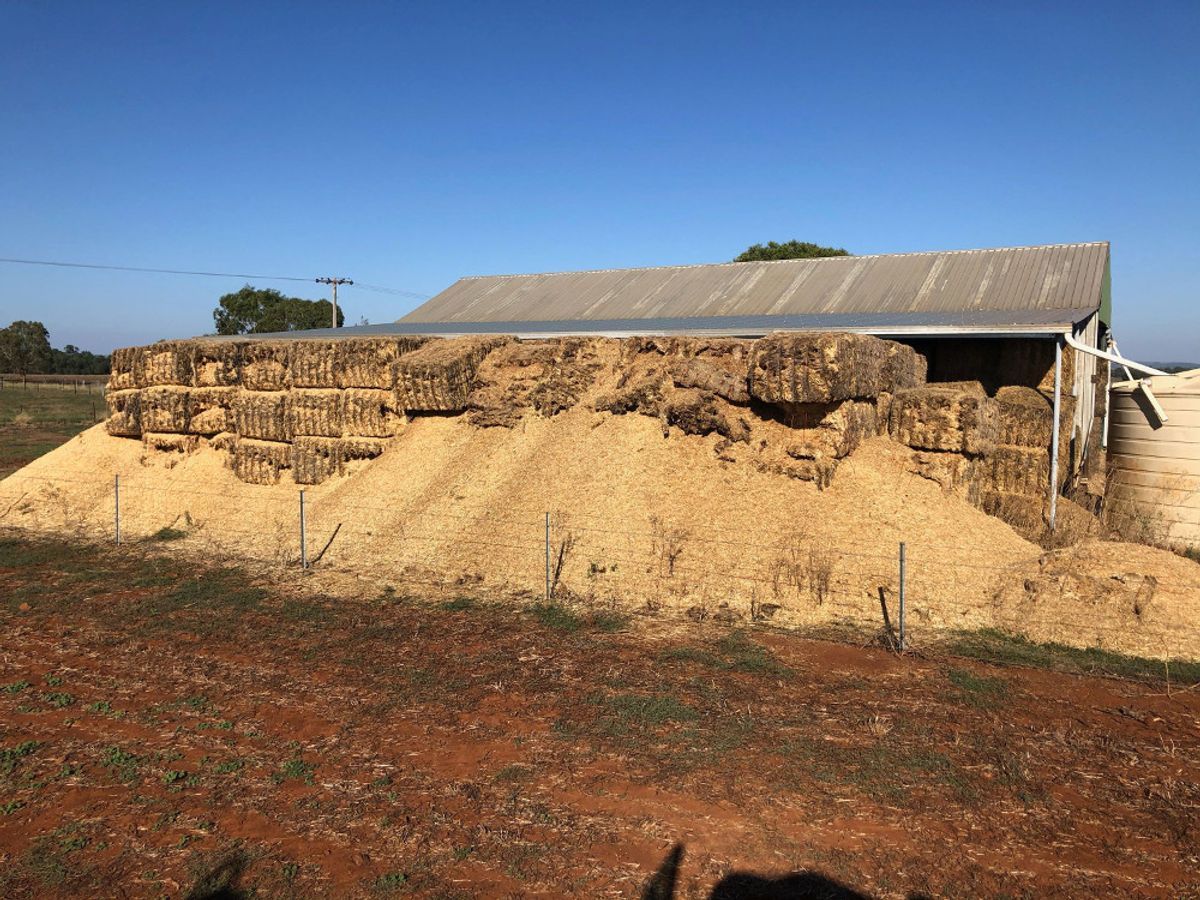 The mouse plague in eastern Australia has caused significant damage to crops. Here, mice chewed through the strings holding hay together in bales.
NSW FARMERS ASSOCIATION

“It was just unreal,” Julie Leven says. The house was in such a state that the pair had to sleep in their camper, and are still cleaning up the mess half a year later.

Eastern Australia is in the grip of one of the worst mouse plagues in living memory. Mice have reportedly bitten people in hospital beds, the population of a prison had to be relocated after mice chewed through the facility’s electrical infrastructure, the furry pests have been reported running around school classrooms, and farmers fear the damage to crops will top AU$1 billion.

Australia is no stranger to outbreaks of this introduced species. “We’ve got data going back to [the] 1900s essentially showing that there are mouse plagues somewhere in Australia every four or five years, and within any particular area it could be every seven or ten years,” says Peter Brown, an ecologist who studies vertebrate pests at Australia’s national science agency, CSIRO, in Canberra. But Brown says he hears from farmers that this is probably the worst mouse plague they’ve experienced.

The main cause is thought to be the abundance of food following a lush, wet summer. After several years of intense drought, culminating in the devastating bushfires of 2019–2020, eastern Australia experienced high levels of rainfall through much of 2020, particularly across agricultural areas. Mice are opportunistic feeders–they will eat almost anything–but cereal crops provide the most tempting bounty.

Population surveys from September to November 2020—springtime in the Southern Hemisphere—were already pointing to rapidly rising levels of mouse activity. This is monitored both with trapping—in particular, examining caught female mice to look for scars left from previous pregnancies, an indication of their fecundity—and mouse chew cards, small squares of paper soaked in canola oil that researchers distribute for mice nibble on. The greater the amount of chewing when the cards are collected, the higher the mouse activity at that location.

“In spring last year, and through summer, we were keeping our eyes out for what was going on in different regions, and certainly northern and western New South Wales was starting up as a bit of a hot spot of activity,” Brown says.

Mouse numbers skyrocketed through the summer and caused such extensive damage to crops that the state government committed AU$150 million to helping farmers cope with the onslaught.

Ecological effects of the invasion

The house mouse (Mus musculus) likely came to Australia with British colonizers in the late 1700s and quickly muscled its way into local ecosystems, causing problems for native species. “One of the threats to native rodents in Australia is actually competition with introduced rodents,” says Emily Roycroft, an evolutionary biologist at the Australian National University in Canberra. “When things eat similar diets and have similar body sizes, it’s typically quite difficult for the ecosystem to support more than one species that’s similar in that way,” Roycroft says.

There isn’t much data on how the new plague is affecting populations of native animals, but anecdotally, ecologists surveying for native species are mainly finding house mice in their traps, Roycroft says. “It would make sense that when an invasive species gets to such high density, that our native species are going to be pushed out a bit.”

Conversely, the glut of mice could help some of Australia’s predators. There are reports that Murray cod in the Murray River are bloated with mice, and observations of birds of prey during a mouse plague in the 1970s suggested that their numbers boomed thanks to the abundance of food.

The rodents’ popularity with predators raises concerns that widespread rodenticide use is causing inadvertent poisonings of native species, particularly birds. The New South Wales Environmental Protection Authority recently issued a warning about improper use of poison-coated grain–for example, its distribution too close to native bushland—after an investigation into bird deaths in central New South Wales found some of the deaths were caused by mouse baits.

The main rodenticide used in agricultural settings is zinc phosphide, which is used to coat grains left out for mice to eat. It turns into deadly phosphine gas in the acid environment of the stomach, but this quickly dissipates and is unlikely to cause secondary poisonings. This method doesn’t always work, though, especially if there’s plenty of other food for the mice to eat or if they don’t eat enough grain to get a lethal dose of the poison. 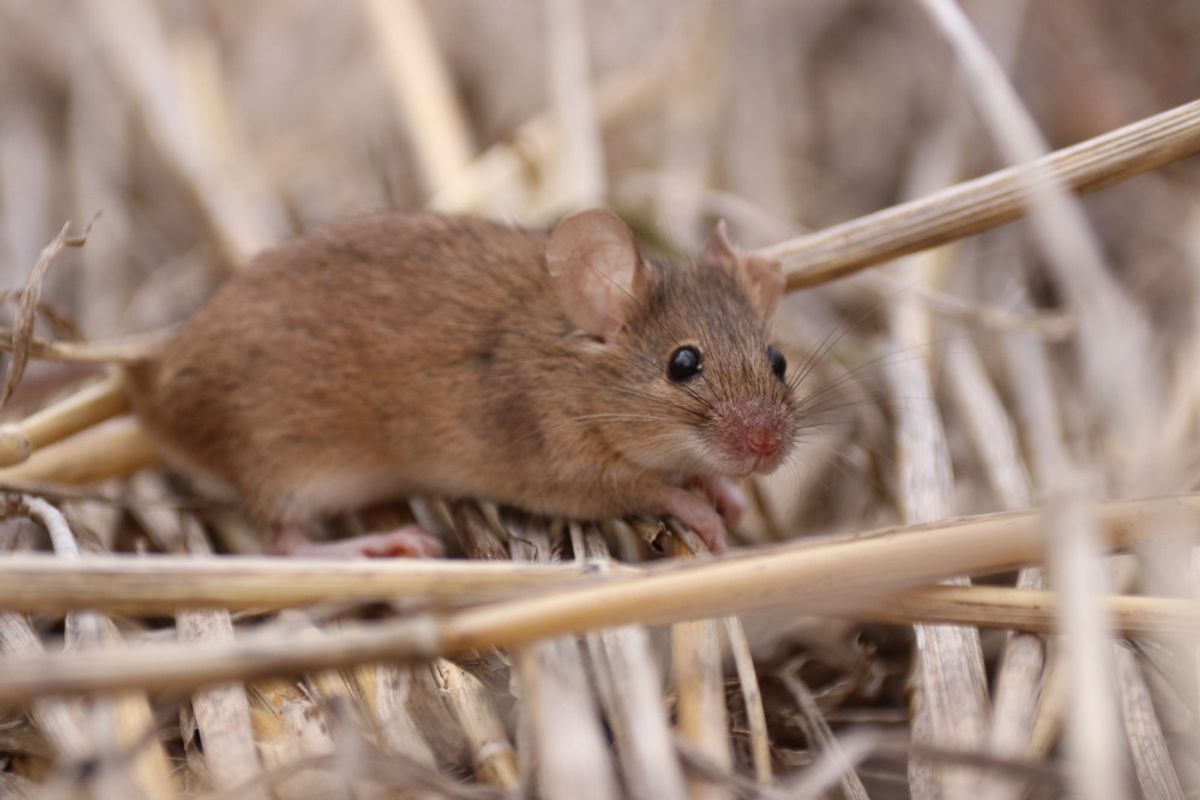 A mouse in wheat stubble
CSIRO

The New South Wales government recently tried to get approval for farmers to use another poison called bromadiolone, which is a blood thinner similar to those found in household rat poisons. However, that application was rejected by the state’s pesticides authority because of concerns over secondary poisoning of animals that might eat the poisoned mice.

Research is underway into a control method that would use CRISPR-Cas9 to edit the genomes of male mice that would then be released into the wild to drive down mouse populations. The technique, called an X-shredder, involves engineering a CRISPR-Cas9 complex that, when activated, targets certain repeated sections of DNA on the X chromosome and cuts at those sections. But if the CRISPR-Cas9 complex is activated during sperm formation, it only does this in sperm, says Paul Thomas, a biochemist and head of the Genome Editing Laboratory at the University of Adelaide. “We are trying to shred the X chromosome in the male germline, so effectively we’re looking to tweak spermatogenesis so that only the sperm that carry the Y chromosome get through to the next generation,” he says. The result would be that all the offspring would be male.

Evidence from a similar approach in laboratory studies in mosquitoes suggests that, if effective, these alterations of sex ratios could cause the population to crash within 10 generations. The X-shredder might be passed down for a few generations, but is engineered with a safety switch to ensure it does not persist in an individual lineage beyond that point.

That research is still in its early days, however, and meanwhile, the mouse plague rolls on, though there are signs that it may be losing momentum. Historical data suggests most plagues end within a year, Brown says, with the occasional rare event lasting two years if mouse populations can survive the winter.

“We were out the other week, doing lots of trapping, and we were capturing thousands of mice, and we only caught one pregnant female,” he says. Low breeding levels mean the population is aging, he explains, while overcrowding and food shortages during winter also lead to disease outbreaks. But while modeling methods are getting much better at predicting plagues, they’re not so good at predicting when those plagues will end.

“Historically, numbers have normally crashed in May, June, or July,” Brown told The Scientist late last month. “May’s gone, June’s nearly gone, and given numbers have been really high I would expect numbers to crash soon, but it’s just hard to say when.”