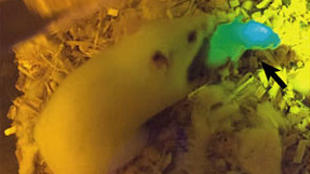 One of the mouse pups born to a female who was implanted with a 3-D printed ovary, which contained follicles tagged with green fluorescent protein. NATURE COMMUNICATIONS, ISSN 2041-1723Adding to the already substantial list of organs that can be 3-D printed and function more or less normally, researchers have made mouse ovaries using the technique. Some of the live mouse they implanted with the prosthetic organs, after seeding them with egg-containing follicles, had normal young. The team of scientists, from Northwestern University, published the results in Nature Communications today (May 16).

The “landmark study” is a “significant advance in the application of bioengineering to reproductive tissues,” Mary Zelinski, a reproductive scientist at the Oregon National Primate Research Center in Beaverton who was not involved with the research, told Science.

The paper’s authors used a 3-D printer to lay down layers of gelatin, which is derived from collagen,...

The researchers then inserted follicle-seeded, printed ovaries into seven female mice whose natural ovaries they had removed. The synthetic ovaries became vascularized within roughly a week, and the scientists mated the recipient mice with males. Three of the female mice bearing synthetic ovaries birthed litters of one or two pups—smaller than the average litter of six to eight. At least one pup of each of the three litters was confirmed to have resulted from an egg ovulated from the synthetic ovary.

“Our hope is that one day this ovarian bioprosthesis is really the ovary of the future,” Northwestern researcher and coauthor Teresa Woodruff told The Guardian. “The goal of the project is to be able to restore fertility and endocrine health to young cancer patients who have been sterilized by their cancer treatment.”