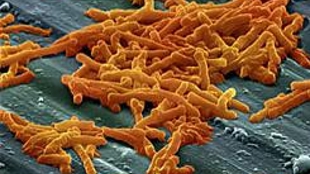 Clostridium difficile sporesWIKIMEDIA, CJC2NDPatients who’d rather not ingest another’s fecal matter to fight tenacious cases of Clostridium difficile infections (CDI) may soon have a less stomach-turning, and perhaps safer, alternative. According to a genetic sequencing analysis of intestinal microbes, a small handful of bacterial species may be all that are needed to restore health. The study, published today (October 23) in Nature, suggests that the bacteria protect against infection by altering the composition of bile acids in the gut.

While antibiotics work wonders fighting myriad infections, they can also wipe out the large contingent of beneficial bacteria that populate the human gut. Such widespread, indiscriminate destruction paves the way for infectious pathogens, including C. difficile—which can cause extreme diarrhea, abdominal pain, and if left untreated, even death. In the past decade, CDI has grown to epidemic proportions in hospitals around the country with nearly a quarter...

A recent medical trend has seen patients with recurring CDI turn to an unexpected source to replenish intestinal flora—the fecal matter of healthy individuals. In one of a handful of recent successful trials, fecal transplants in the form of frozen, encapsulated pellets of feces squashed infection in 18 of 20 patients.

Beyond the “yuck” factor, questions over safety plague fecal transplantation. Although no specific health problems associated with fecal transplants have been reported, some researchers believe that despite extensive screening, which can run thousands of dollars per sample, there is still a theoretical risk for transmitting infection. “Fecal samples can contain normal microbiota, but also organisms and compounds that are not possible to quantify at this point,” said study coauthor Eric Pamer of the Memorial Sloan Kettering Cancer Center in New York City. “So, a fecal sample, even from a healthy donor, is always a bit of a mystery.”

Demystifying what patients put in their bodies is paramount, according to Texas A&M University microbiologist Joseph Sorg, who was not involved in the study. “If you had a targeted approach,” he said, “you could give a patient a specific set of bacteria that can provide resistance in a controlled setting.”

Pamer’s team has developed such an approach. The researchers sequenced the gut microbiomes of both mice and humans in search of individual species capable of eradicating infection. They discovered that in antibiotic-treated mice, CDI resistance was strongly correlated with the abundances of C. scindens and, to a lesser extent, 10 other bacterial taxa. A similar exploration of the intestinal microbiota of human patients undergoing a stem-cell transplantation procedure that left them vulnerable to CDI also pointed to C. scindens as the most potent source of infection resistance.

Administering C. scindens to antibiotic-treated mice infected with C. difficile resulted in significantly increased survival rates—80 percent, versus 50 percent for a control substance. A cocktail of C. scindens plus three other C. difficile-inhibiting bacteria was even more effective, resulting in 100 percent survival. In addition, the abundance of both C. scindens and the bacterial cocktail were strongly correlated with resistance.

Next, Pamer’s group investigated the mechanism underlying C. scindens-mediated inhibition of infection, focusing on the ability of the microbe to express the enzyme 7a-hydroxysteroid dehydrogenase. This enzyme, rare among intestinal bacteria, is critical for converting primary bile acids to secondary bile acids in the colon. C. difficile spores interpret the presence of primary bile acids as a signal that they are in the gut and should start germinating. The researchers hypothesized that C. scindens may prevent C. difficile growth by blocking this signal. To confirm this hypothesis, they loaded Petri dishes with the intestinal contents of antibiotic-exposed mice. As expected, C. scindens inhibited C. difficile. But when they added a chemical that binds bile acids, C. difficile flourished, suggesting that C. scindens-mediated inhibition of C. difficile is dependent upon modifying endogenous bile acids.

“Lots of people have looked at using bacteria to mediate the so-called colonization resistance to C. difficile,” said Vincent Young, a microbiologist and infectious disease physician at the University of Michigan who was not involved in the study, “but this paper really goes a long way towards defining a good mechanism for how it happens.”

Pamer’s team is continuing to explore the gut microbiome in search of beneficial bacteria that can tackle other antibiotic-resistant pathogens. The group recently received US Food and Drug Administration approval for a Phase 2 clinical trial to investigate “autotransplantation.” In this procedure, CDI-susceptible patients undergoing bone marrow transplants will have their gut microbiota reconstituted with their normal, pre-surgery fecal matter in an effort to stave off infection. The idea is that ingesting one’s own poop will be safer than that of a stranger, and perhaps more palatable.