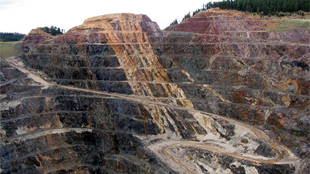 Homestake gold mineWIKIPEDIA, RACHEL HARRISThe tree of life is dominated by microbes, but many large branches remain uncharted because scientists have been historically restricted to studying the small fraction of species that will grow in a lab. An international team of scientists has now begun to redress this bias, sequencing full genomes from single cells to bring the “uncultured majority” into view.

In total, the team identified more than 200 new microbial species belonging to 29 underrepresented or unknown lineages. And the results, published today (July 14) in Nature, were full of new metabolic abilities and genetic surprises.

“[There has been a] strong imperative to fill in the microbial tree of life,” said Philip Hugenholtz from the University of Queensland, one of the study’s leaders. “If you have an incomplete view of evolution—vastly incomplete in the case of microorganisms—you have a vastly incomplete understanding of biology.”

To fill these gaps, the team collected samples from nine diverse habitats, including industrial reactors, hot springs, and a gold mine. The researchers gravitated towards places that were low in oxygen since these tend to harbor a greater and more interesting spread of microbes than familiar sites like our bodies.

From these samples, Tanja Woyke from the Department of Energy’s Joint Genome Institute in California isolated 9,600 individual cells and amplified the genomes of around a third of these. If any of these genomes looked like they came from new lineages, the team sequenced them completely.

They ended up with 201 full genomes representing 21 bacterial lineages and 8 archaeal ones. Some of these were candidate phyla known only by abstract codes, but the team has now given them descriptive names based on the biology of their members. For example, EM19 is now Calescamantes (“heat lovers”) because they hail from an extremely hot environment, and OD1 is now Parcubacteria (“thrifty bacteria”) for its streamlined metabolism.

Jack Gilbert from the Argonne National Laboratory calls the study a “landmark,” even though it doesn’t break new technical ground. “Its scale and impact are exactly what Nature is there for,” he said. “The data allow us to confirm some known relationships, but also uncovered some awesome new ones.”

For example, the team found that three of the candidate phyla are closely related and form a super-phylum called Patescibacteria, from the Latin for “bare bacteria.” “They have tiny genomes for free-living organisms,” said Hugenholtz, and their metabolic abilities are probably limited compared to most known bacteria. Other microbes have similar streamlined genomes, Hugenholtz said, but “our findings suggest that this lifestyle choice might be more common than previously appreciated. It might be the most common one.”

Among the new genomes, the team also found many archaeal genes that had ended up in bacteria, and vice versa—a sign that these two domains regularly exchange DNA.

For example, the Patescibacteria make two of the bases in their DNA using a PurP enzyme borrowed from a very early archaeon, and they lack the PurH1 enzyme that all other bacteria use for the same task. Meanwhile, two of the newly described archaea species transcribe their DNA using sigma factors—proteins that were thought to be exclusive to bacteria. And in the first known exchange of its kind, one archaeon even seems to have borrowed a gene from a eukaryotic slime mold.

The team’s work also makes it easier to parse the data from earlier metagenomic studies, which collectively sequence the DNA from all the microbes at a specific site. The result of this strategy is a mountain of anonymous DNA fragments, which can be anchored to a phylogenetic tree by comparing them to existing genomes. By filling in many new branches, the new work should allow other scientists to anchor these fragments more accurately.

By specifically going after new branches in the tree of life, the team has expanded the diversity of known microbial genomes by 11 percent. Still, there is a long way to go. They estimate that to cover half of the full diversity of microbes, we would need to sequence at least 16,000 more genomes—80 times what they accomplished in this study.

“It’s certainly a daunting target, but we’re excited and will steadily work towards this goal,” said Woyke, whose team is developing new technologies to accelerate and scale up their work. Hugenholtz added, “Ten years ago, I’d have said that it would take us a hundred years to get where we are today. I would not be at all surprised if we hit this mark in the next decade.”