The commensal microbes of the human gut may influence physiological changes associated with normal pregnancy, according to research published today (August 2) in Cell. Alterations in the gut microbiome through pregnancy correlate with increases in fat and inflammation, and transferring the gut microbes of late-trimester pregnant women into germ-free mice had a similar effect, suggesting a role for the microbes in metabolism changes during gestation.

The research shows “a clear shift in the composition of the microbiota during the course of pregnancy,” said David Relman, who investigates the gut bacteria at Stanford University and did not participate in the research. It’s intriguing, he said, that “these changes that take place may have some relationship to changes in maternal physiology that are well-described but not well-understood.”

Fat gain and decreases in insulin sensitivity that lead to increased blood sugar, for example, are believed to support the baby’s growth and the production of breast milk, explained Ruth Ley, a microbiologist at Cornell University who led the study. “These [changes] look a lot like metabolic syndrome,” a condition associated with increased risk of cardiovascular disease. Previous work had showed that symptoms of metabolic syndrome could be influenced in mice by manipulating gut microbes, suggesting to Ley that a similar mechanism may underlie these same metabolic changes in pregnant women.

To investigate how the gut microbiome is altered during pregnancy, Ley collaborated with researchers at the University of Turku in Finland to examine the microbes in stool samples from 91 pregnant women over the course of their gestation periods. Profiles of individual women showed large changes in microbiome composition as the women advanced from first to third trimester. As a group, third trimester women displayed more diversity in the types of bacteria identified, but the individual profile of each woman showed a decline diversity over time, suggesting certain bacteria species were outpacing others.

To confirm the connection between gut microbe diversity and the metabolic changes, lead author Omry Koren, also at Cornell University, transferred microbes from first and third trimester women into germ-free mice. Sure enough, the researchers found that animals receiving gut microbes from women further along in their pregnancies gained more fat and showed bigger dips in insulin sensitivity.

Significantly, bacteria in the phyla Proteobacteria and Actinobacteria, members of which are often associated with increases in inflammation, increased the most in third trimester mothers, explained Ley. Correspondingly, the researchers also noted increases in inflammation markers during late pregnancy compared to early stages, suggesting that the women’s microbes might be promoting inflammatory responses, which are known to drive symptoms of metabolic syndrome.

Metabolic syndrome is usually associated with ill health, but the findings hint that physiological changes in pregnant women are part of a beneficial process that helps “maximize the odds of survival of the next generation,” said Martin Blaser, who studies the role of the microbiome in health and disease at New York University and was not involved in the research. The study also showed that women’s microbiome profiles returned to their first trimester state after giving birth, suggesting to Blaser that inflammation and fat gain in pregnancy might be the result of a temporary, microbe-driven process that “maximizes the energy transfer to the fetus.

How, exactly pregnancy prompts changes in the microbiome remains unclear, though Ley hypothesizes that it may be initiated by changes in immune function. Pregnancy is accompanied by immune function changes that prevent the fetus from being rejected as foreign tissue, and microbes and immune cells interact constantly in the gut. Furthermore, altering immune function in mice can stimulate fat gain, inflammation, and insulin resistance—symptoms which germ-free mice also exhibit after receiving gut microbes from mice with metabolic syndrome.

Regardless of the mechanism, the current study “certainly lends credence” to the hypothesis that microbes influence metabolism, said Relman, though he cautioned that researchers have yet to establish a causal relationship between physiological and microbial changes. Ley hopes to solidify the association by comparing the microbiomes of healthy pregnant women with those of non-pregnant patients with metabolic syndrome.

In the meantime, arguing whether hormones or microbes are causing pregnancy-related upticks in fat or insulin insensitivity is pointless, said Blaser. “We [humans] are an integrated circuit. Cytokines, hormones, microbes—they all interact and influence each other.” 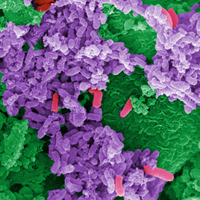 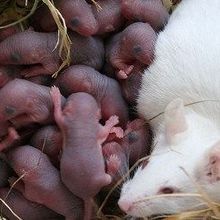 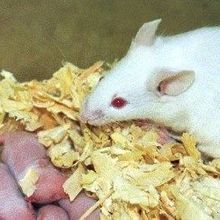