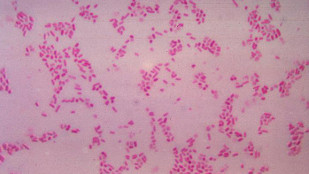 Bacteroides fragilis ss. vulgatus WIKIMEDIA, CDCThe mammalian gut microbiome is a teeming and dynamic community that adapts quickly to environmental shifts in the host. Researchers at Washington University School of Medicine in St. Louis, Missouri, have now identified some of the genes bacteria residing in the mouse gut use to adapt to changes in diet, according to a study published today (October 1) in Science. Previously, researchers trying to understand the incredible diversity of the gut microbiome have been limited by available tools to study genetic changes in gut. So Meng Wu, Jeffrey Gordon, and their colleagues developed a new method of tracking genetic changes in gut bacteria.

“[The study] elegantly demonstrates the functional principals of the microbiome,” said Joseph Petrosino, a microbiologist and geneticist at the Baylor College of Medicine in Houston, Texas, who was not involved with this study. “You’re really seeing the...

Wu created a large library of 87,000 to 167,000 different mutant strains of four different species of Bacteroides, a genus that is commonly found in intestines. She then colonized germ-free mice with the mutant strains and 11 other bacterial strains common in the gut to create simplified microbiota. She tracked the proportion of the strains that were recovered from the mice to gauge how well the strains adapted to the gut environment, giving each mutant strain a “fitness index” based on how abundant it was in the gut.

“What was pleasing was how we could get a digital read-out of the consistency of a community assembly through this . . . method,” said Gordon. “We could measure the robustness of the community and its resiliency to dietary perturbation.”

The researchers also studied how Bacteroides adapted to changes in host diet. Some mice were fed a varying diet that oscillated between high-fat/high-sugar and low-fat/high-complex-carbohydrate.. Two control groups were fed a monotonous diet; one consisting of just the high-fat/high-sugar food and the other fed only the low-fat/high-complex-carbohydrate diet . The mice fed the varied diet had microbiomes that were more varied than those of animals fed monotonous diets. The team also identified 15 core genes considered “fitness determinants” that were linked to amino acid metabolism. Wu and her colleagues also found that the simplified gut microbiota responded to a potential prebiotic (arabinoxylan), a polysaccharide, and a source of carbohydrates for the bacteria. However, the team was unable to determine whether the effects on the abundance of individual species were direct results of the dietary changes versus their interactions with other microbial community members.

Petrosino noted that the responses the Wu and her colleagues observed may not translate when applied in a more-complete microbiome. He compared the phenomenon to borrowing ingredients to make a cake: if you live on your own or with just a few neighbors, you need to provide all the ingredients yourself. If you live on a bustling street, there’s a pretty good chance you can borrow the eggs, flour, or whatever else you’re missing from your neighbor. In the same way, bacteria with a small group of neighboring species may metabolize what they need to survive but in a more complex system may use another set of genes and “borrow” metabolites from the larger community of bacteria available to them.

The team’s methodology may be applicable to many different gut microbiome-related questions, said microbiologist Thomas Sharpton of Oregon State University who was not involved in the study. “I think this will go down as significant advance in field,” said Sharpton. “It provides us with a tool kit for a mechanistic understanding of the microbiome.” For example, he said, “you could imagine the same procedure applied to variety of mice with genetic mutations.”

Other applications include determining which organisms are most important for fecal transplants, or whether dietary changes and microbiome fitness has any effect on susceptibility or resistance to gastrointestinal infections, for example.

Overall, said Gordon, the findings lay the groundwork for future studies on microbiome function. For now, he said, the results demonstrate that “an organism is capable of transforming the microbiome as these food webs are assembled and altered.”

Correction, clarification (October 2): This article has been updated to reflect that the researchers administered arabinoxylan as a potential prebiotic (not a probiotic, as was written) and to add the phrase "the abundance of" to the fifth-to-last paragraph. The Scientist regrets the errors.