Typically, the worm Caenorhabditis elegans falls asleep after it experiences stress or hours of swimming. In a recent study, scientists observed another sleep trigger: being confined to a microfluidic chamber. As such devices are widely used to analyze different worm behaviors, the authors caution that the sleep induction could interfere with data interpretation. The results were published November 6 in Nature Communications.

“In our field, microfluidic chambers have become very commonly used, and they are valuable tools for precise environmental control and for neural imaging . . . but what this study highlights is that we are significantly impacting the physiology and behavior of these animals by confining them in such a way,” says Cheryl Van Buskirk, a geneticist at California State University in Northridge. Van Buskirk studies sleep and stress response in worms, but she was not involved in this research.

The team first observed this behavior while developing a technique to make electrical measurements of individual cells in worms placed in microfluidic chambers. They noticed that the muscle cells of these animals would not show any activity during some periods of time. Inactivity, however, is not always equivalent to sleep.

“There are specific criteria for sleep, so we actually spent a good deal of the [latest] paper testing those specific criteria,” says Daniel Gonzales, who participated in this study as a graduate student at Rice University in Houston, but has now moved to Purdue University in Indiana. They tested, for example, whether this behavior was reversible, if it was associated with a decreased response to stimuli, and if the worms took on a stereotypical sleep posture. They found that, in addition to fulfilling these criteria, this microfluidics-induced quiescence was also regulated by neurons previously reported to control sleep in C. elegans.

Whether this is a new sleep behavior in the nematode is not clear. Compared to sleep triggered by stressful environments or by episodic swimming, “the statistics of when the animal falls asleep and how long it stays asleep is changed pretty dramatically in these microfluidic devices,” says Jacob Robinson, a researcher at Rice University who led the study. For instance, worms fell asleep between 7 and 113 minutes after being placed in a small chamber, while it took between 78 and 229 minutes to observe swimming-induced sleep.

“Microfluidic-induced sleep may not actually be a new type of sleep per se,” says Van Buskirk, “but rather an enhancement of the animal’s predisposition to transition into a certain sleep state that has been previously described, and so in this regard, you could consider it maybe sleep enhancing rather than sleep inducing.”

The team investigated which cues influenced sleep in the microfluidic chamber. They found, for instance, that food availability matters: total sleep decreased as the level of satiety in worms increased. They also tested the role of temperature, finding that worms slept more in warmer chambers, an effect that was reduced in mutants with defective AFD neurons, the primary temperature sensors in C. elegans.

“The aspect that I found most interesting in this paper was the link between sleep and temperature, and that the authors show that the AFD neuron mediates this effect,” says Henrik Bringmann, a C. elegans sleep researcher at the Max Planck Institute for Biophysical Chemistry in Göttingen, Germany, who did not participate in the study. He adds that, even though previous work had shown that thermal stress (higher than 30 °C) induces sleep, the Robinson lab’s experiment is different because “we are talking about a physiological temperature range.” The authors tested the animals at temperatures between 18 and 25 °C—typical lab conditions, showing that variation in non–heat-stress temperatures affects sleep in worms. Bringmann was not involved in the project, but he provided two of the worm strains the authors studied.

Finally, the team tested the role of confinement by modifying the size of the chambers. They found that in 50 µm–width chambers, C. elegans total sleep increased nearly four times compared to sleep in 500 µm–width chambers. Although all tests were done using microfluidics, authors suspect that this sleep state could also be induced in other contexts where confinement is increased, for example, in agarose-based chambers.

Scientists studying C. elegans behavior in microfluidics “need to control for sleep in some way,” suggests Gonzales. Understanding the factors driving sleep inside the chambers might allow researchers to better design such experiments. “If you don’t want to see sleep, we demonstrated several cases where you can minimize it, so if you add food to the chambers, or if you make your chambers very large,” he says. “But we are also giving [scientists] ways to increase sleep if they are really interested in pathways or neural circuits or genetics that drive sleep as well,” he adds.

“I think [this work] is important for the field because it emphasizes again that sleep is under the control of many external cues, and this means that we have to very carefully design our experiments and control our experimental conditions in order to have reproducible results,” agrees Bringmann. 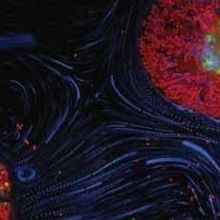