Microscopic swimming robots that could navigate through the body to perform medical tasks such as delivery of targeted cancer therapies or surgeries are currently in development. In a study published March 24 in Science Robotics, scientists made magnetically controlled microrobots based on neutrophils, a type of white blood cell. In mice, these so-called neutrobots penetrated the blood-brain barrier (BBB) to deliver drugs to brain cancer cells.

“This is a very cool idea,” says Liangfang Zhang, a nanoengineer and bioengineer at the University of California, San Diego, who was not involved with the study. “I would say this paper is still an early proof-of-concept study, but I think that the overall concept is novel. It’s interesting because it’s new thinking about how to send cargo to the brain.”

A major hurdle in treating neurological diseases is getting drugs past the BBB, a highly selective boundary that denies most substances admission to the brain. But certain white blood cells are granted special access to deal with infections and inflammation, making them good trojan horses for getting drugs past this blockade. In previous studies, researchers have loaded brain cancer drugs into neutrophils and macrophages, which have a natural ability to scout out cancer because they swim toward higher concentrations of inflammatory chemicals released by diseased tissue.

But prior iterations of drug-ferrying immune cells have failed to completely treat mouse brain tumors, likely due in part to slow migration to the disease site. To improve speed and control, researchers have endowed microrobots based on sperm, bacteria, or red blood cells with magnetic material to externally guide them with magnetic fields, says Zhiguang Wu, a bioengineer at the Harbin Institute of Technology in China and a coauthor of the new study. 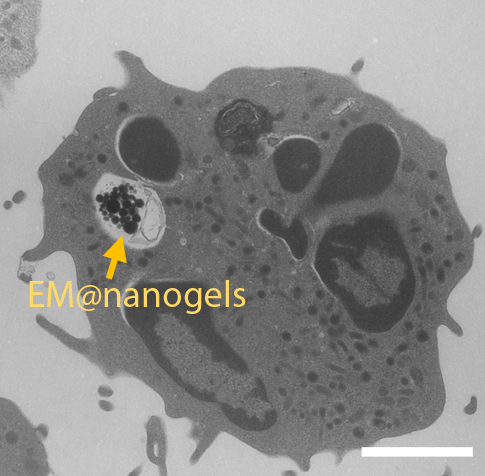 A transmission electron microscopy image of a single neutrobot. The yellow arrow indicates a cluster of nanoparticles containing iron oxide and paclitaxel, each enclosed by an E. coli membrane. The scale bar is 2 μm.
H. ZHANG ET AL. SCIENCE ROBOTICS, 2021

The team tested the neutrobots’ navigation and drug-delivery capabilities in vitro. Under the control of a rotating magnetic field, the neutrobots reached a speed of 16.4 µm per second, about 50 times faster than the speed of natural neutrophils. By monitoring the neutrobots via a microscope, the researchers could direct them to move in complex orientations on an artificial substrate.

To evaluate the neutrobots’ inflammation-seeking ability, the researchers placed them in a gel with a concentration gradient of an inflammatory factor. The neutrobots migrated toward higher concentrations of the chemical at a speed on par with natural neutrophils. And in a model BBB, neutrobots penetrated mouse cells grown on a membrane to access glioma cells and released their drug payload upon exposure to inflammation signals.

Finally, the researchers tested whether the bots could treat brain cancer in mice. First, they injected glioma cells into mouse brains. After 10 days, they performed surgery on some of the mice to remove a portion of the tumor in order to boost neutrophil-attracting inflammatory signals. The researchers injected neutrobots into the tails of all of the mice, and in a subset of mice, they used a rotating magnetic field to direct the neutrobots toward the brain. Using magnetic resonance imaging (MRI), the team found that more neutrobots accumulated around gliomas in mice treated with both surgery and the magnetic field compared with mice that weren’t exposed to the magnetic field, didn’t undergo surgery, or received neither. The doubly treated mice also survived longer—evidence that the two interventions complemented one another. Transmission electron microscopy confirmed that neutrobots penetrated the BBB and entered glioma tissue.

All of the neutrobot-treated mice survived longer compared with animals treated with an injection of just saline or paclitaxel, indicating that neutrobots could still deliver drugs across the BBB in response to a weak inflammatory signal or a strong inflammatory signal without magnetic propulsion.

According to Zhang, the individual components of the study—the use of immune cells as drug carriers, magnetically controlled nanoparticles, and bacterial membranes as cloaks—are not new. “But what they did is integrate these common individual components together and assembled them into a new system,” he says. “They [developed] a very unique functionality—that is, the long-range control of neutrophils.”

Cancer-fighting robots in the clinic?

Mariana Medina-Sánchez, a bioengineer at the Leibniz Institute for Solid State and Materials Research Dresden in Germany who did not contribute to the research, says the study is valuable because it demonstrates effective treatment of tumors in vivo, a goal of many researchers in the field. “[The study] is complete, it’s systematic, and there is strong evidence that what they’ve developed is functioning,” she says.

If you know the amount of the drug that you load per microrobot, you can control the drug dose by swarming these microrobots in a controlled way.

But before microrobots can be used to treat cancer in people, there are still a number of challenges that need to be overcome. One of these is improving the percentage of microrobots that make it to the tumor. “They had an accumulation of these neutrophil-based microrobots of about eleven percent in the disease site [in vivo]. So what happens with the others?” says Medina-Sánchez. Microrobots could accumulate in other organs or regions of the body, and the long-term side effects are unknown, she says. “But this happens for every type of microrobot, not just for this particular work. This is a challenge for everyone to [overcome].”

Once the microrobots arrive at the disease site, another hurdle is making sure they deliver enough of the drug. “You need to increase the overall drug payload inside, and you also need to control premature drug release,” says Zhang. “It takes time for the neutrophil to get to the destination. You don’t want to them to dump all the payload before they get to the destination.”

Because a single microrobot can’t carry enough medication to treat a disease, researchers are also trying to understand how they move as swarms—similar to the collective movements of groups of ants, fish, or birds. “If you know the amount of the drug that you load per microrobot, you can control the drug dose by swarming these microrobots in a controlled way,” says Medina-Sánchez. “So this is one of the challenges: how to transport multiple [microrobots] in a controlled manner and deliver them to a target location.” Wu and his colleagues found that neutrobots formed chains of four in vitro, and these swarms swam about five times faster than individual bots did. But according to Medina-Sánchez, other microrobot researchers are aiming for swarms of hundreds, thousands, or even millions. “It depends on the target and location,” she says. “You may need just a few or millions of them.”

It’s not clear how the neutrobots swarmed in mice because current imaging techniques aren’t good enough to track individual or small chains of microrobots in real time at high enough resolution in vivo—another challenge for precise navigation of these tiny drug couriers in humans.